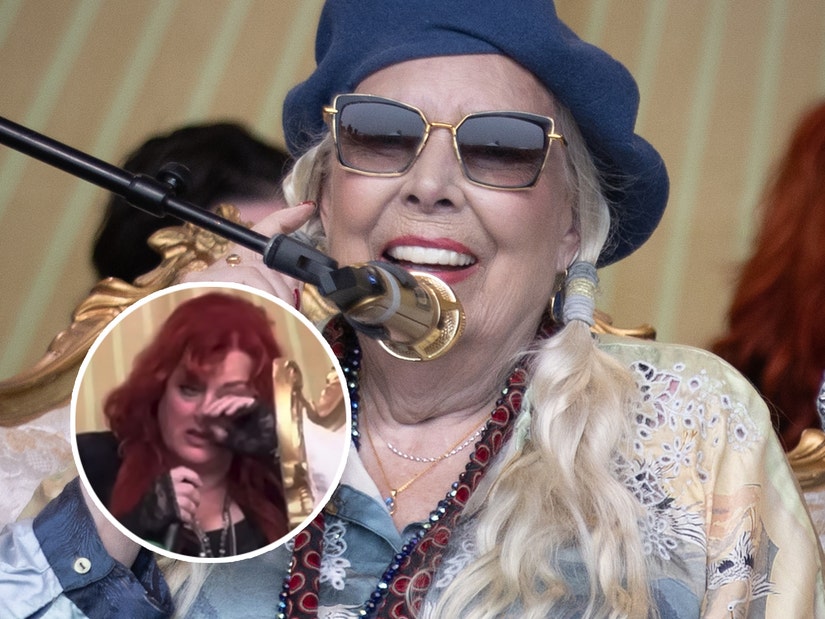 Joni Mitchell had the audience -- and some of her fellow performers -- in tears during a surprise performance at the Newport Folk Music Festival over the weekend.

The gig was reportedly her first public performance since 2013 and first full set since 2002, as well as her first show since she suffered a brain aneurysm in 2015. The closing act was billed "Brandi Carlile & Friends," with Mitchell sharing the stage with musicians including Carlile, Carlile's own band, Marcus Mumford, Taylor Goldsmith and Wynonna Judd.

Judd -- whose mother Naomi died in April -- could be seen crying throughout Mitchell's performance of "Both Sides Now," looking up, wiping tears from her eyes and reapplying makeup as the legend sang one of her biggest and most moving hits.

According to a local report, the set started with renditions of "Carey," "A Case of You" and "Just Like This Train," during which Mitchell sang and strummed along with the other performers -- before taking the lead with "Summertime" and "Both Sides Now."

Mitchell, 78, spoke with CBS News following the set and said that while she's "never been nervous about being in front of an audience," she did "want it to be good ... and I wasn't sure I could be." She added, "But I didn't sound too bad tonight!"

The legend said she also had to re-teach herself how to play guitar following her aneurysm, saying she's still learning.

"I'm looking at videos that are on the net to see where I put my fingers, you know. It's amazing what an aneurysm knocks out – how to get out of a chair! You don't know how to get out of a bed. You have to learn all these things by rote again," she said. "I was into water ballet as a kid, and I forgot how to do the breaststroke. Every time I tried it, I just about drowned, you know? So, a lot of going back to infancy almost. You have to relearn everything."