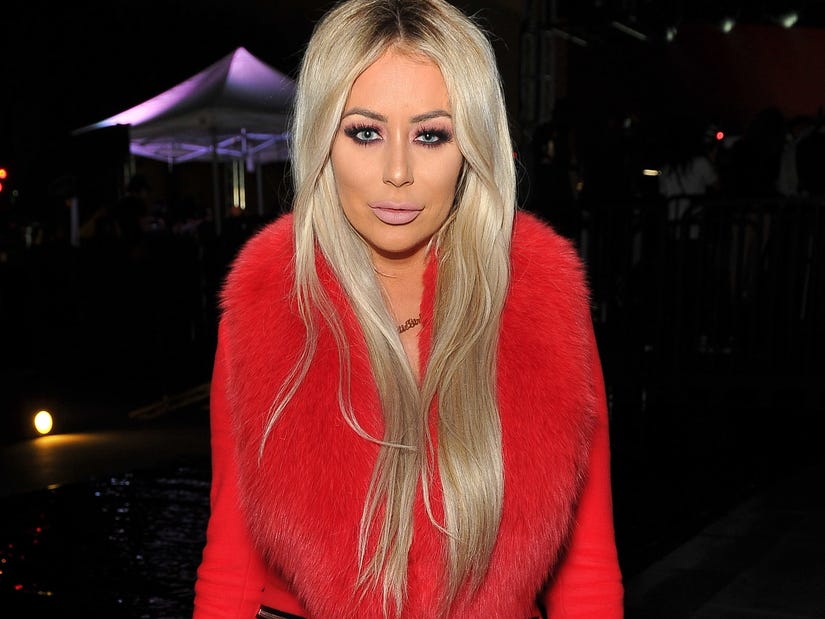 "I suggest you learn this lesson fast ..."

Aubrey O'Day responded to a viral TikTok video accusing her of Photoshopping vacation photos on Instagram ... by sharing another obviously Photoshopped pic.

On Sunday, the former Danity Kane star posted a pair of photos showing her in a bikini at the gates of Heaven, before hugging Jesus Christ. In the caption, she hit back at the criticism of her page and while she doesn't flat out cop to inserting herself into other people's photos, she explains why her feed does look the way it does.

"took the [private jet] to Heaven in the last 24 ... wanted to share with y'all how beautiful it was ... also ran into Jesus and we hugged it out," she wrote in the cheeky caption. "He told me to let the lil bird on tiktok with SO much to say about my life ... that she needs to stop washing her p---- in the sink. We are adults baby, you gotta run the whole thing through the water."

"..and not that I need to explain myself, but I've been in this industry for over 20 years and have been traveling the world since I was 7. If I want my Instagram to be curated like a museum of ART then that's what the f--- is going to happen," she continued. "I'm an artist, a REAL creator. I do all of my creative from my music to my flicks ... everything from my hair, glam, nails, styling, backdrops, editing, shooting, & the weather isn't always perfect when I shoot, and I vacation alone."

"I don't need to be flown places. Let alone the fact that a lot of the shots I give y'all are in places you have to spend hours scaling mountains to get to. Respect my aesthetic, I work hard to give y'all beautiful content that feels the way the places I travel vibrate," she went on. "because I want y'all to vibrate high with me."

To the "lil tok girl" who posted the video criticizing her feed, she added, "I am so sorry to your place of work that allows you to sit on my page all day with binoculars ... but I suggest you learn this lesson fast: you don't even need to concentrate on others to be your own version of special and necessary in this world /.. you can make positive changes just by using your own gifts ... stop looking left and right if you wanna move forward."

Last week, TikTok user @residualdata went viral for a video in which she scrolled through O'Day's page, accusing some of the images on her feed of being stolen, with the singer Photoshopped into them.

"I will truly never get over people photoshopping themselves into random vacation photos. So here we have Aubrey O'Day ... who apparently went on vacation around Bali by just Photoshopping herself into pictures," she said in the video. "And it's truly like every single picture. I don't even know if she went to Indonesia, like at all. So she either just steals content from other content creators or photoshops herself into random promotional images."

She concluded her video by asking, "In an era when social comparison is so high and high real effects, why are we doing this?"

O'Day announced in July 2021 that she was moving out of the United States and had sold her place in America and boarded a plane "to a new life."

"For those of you who are friends, or have spent enough time on my Twitter over the years to get into my mind, you know I've been wanting to move out of the country for a while now," she said at the time. "I've been so anxious, scared, emotionally raw. I have no idea what will come next ... which completely exacerbates the control freak in me. however .. life just got too predictable and uninspiring for me."

Since then, she's shared photos and video from Bali, Bora Bora, Maldives and, more recently, Santorini and Athens, Greece. Check out some of her posts below.