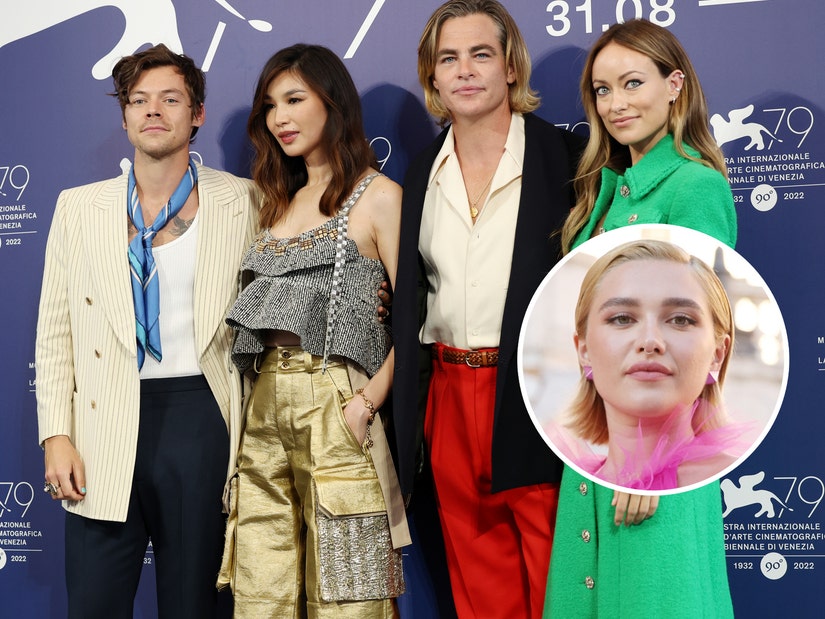 Pugh wasn't present for the presser, where a question about Shia LaBeouf was also shut down.

The ongoing drama surrounding "Don't Worry Darling" followed director and star Olivia Wilde to the Venice Film Festival, where she was asked about rumors of a feud between her and costar Florence Pugh.

On Monday, Wilde was joined by the film's cast -- including Harry Styles, Chris Pine and Gemma Chan -- at a press conference ahead of the movie's premiere. Pugh was MIA from the panel, though that was reportedly always the plan, as she's currently filming the sequel to "Dune." She did, however, attend the red carpet premiere (photos below).

During the presser, one reporter called Pugh's absence a "shame," before asking Wilde, "Can you just clear the air and address if there's been a falling out there and if so why? Because it's something that people are discussing."

Wilde responded by calling Pugh "a force" and added, "We are so grateful that she's able to make it tonight despite being in production on 'Dune.'"

"I know, as a director, how disruptive it is to lose an actor even for a day, so I'm very grateful to her, to Denis Villeneuve for helping us," she continued. "And we're really thrilled we'll get to celebrate her work tonight. I can't say enough how honored I am to have her as our lead. She's amazing in the film."

The director then turned to the rumors in the press about their potentially icy relationship.

"As for all the endless tabloid gossip and all the noise out there, I mean, the internet feeds itself," she said. "I don't feel the need to contribute. It's sufficiently well nourished."

Another reporter brought up the "noise" surrounding Shia LaBeouf, but the question was shut down by the panel's moderator -- who said "this question has been answered when she talked about the internet."

Last month, Wilde did an interview with Variety in which she said Shia's "combative energy" and "process" were "not conductive to the ethos that I demand in my productions," leading to his exit. Styles replaced the actor in the film.

Following Wilde's interview, LaBeouf sent her an e-mail, which he also shared with Variety -- pushing back on any insinuation he was fired.

In the letter -- after saying he wished her health and happiness -- he spoke about his newborn daughter Isabel with Mia Goth and added that he's "embarked on a journey that feels redemptive & righteous." He claimed that he was 627 days sober and now has "a moral compass that never existed before my great humbling that was the last year and a quarter of my life." LaBeouf also claimed to have reached out to Wilde recently "to make amends" and seek forgiveness "for the failed collaboration we shared."

He, however, said he was "a little confused about the narrative that I was fired," telling her, "You and I both know the reasons for my exit. I quit your film because your actors & I couldn't find time to rehearse." Acknowledging he was "still persona-non-grata" in Hollywood, he said he was pushing back on this story because he thinks about what his daughter will see about him in the press when she gets older.

A rep for Wilde told Looper: "Olivia has never uttered the words 'I fired him.'"