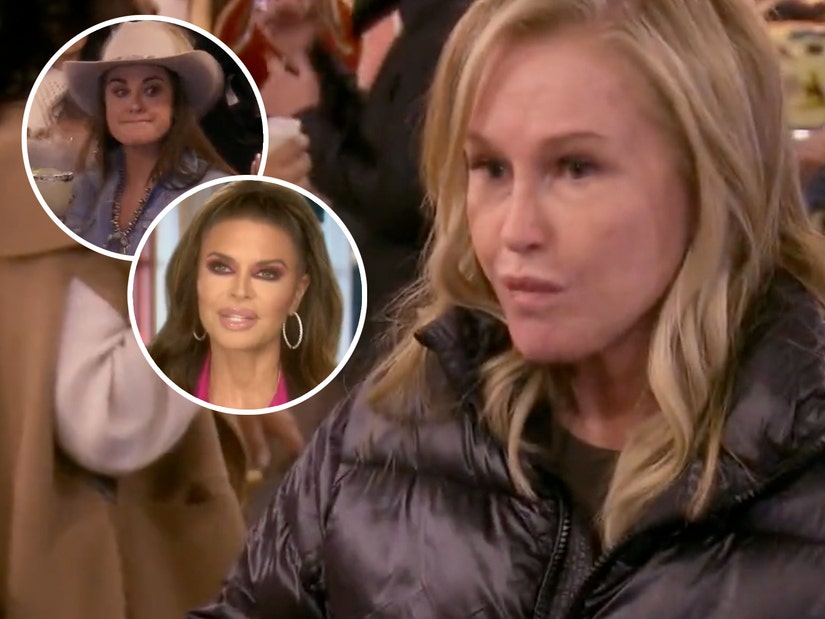 Kathy Hilton reached a breaking point on Wednesday's new hour of "Real Housewives of Beverly Hills" ... and a battle of tequila is at the root of the drama.

The tensions have been slowly building between Kathy and some of her cast mates all season long, as Hilton has made it a point to promote a line of tequila she and daughter Nicky Hilton are investors in whenever possible. While the women on the show often use it as a platform to plug their side-hustles, something about Kathy's repeated attempts to push her liquor has rubbed a few of them the wrong way.

On the most recent episode, Kyle Richards organized a day of shopping at an Aspen hat store and stocked the bar for the occasion. Hilton's tequila was supplied to the establishment to serve -- probably by Kathy herself -- but Lisa Rinna was seen going out of her way to order a different brand, Kendall Jenner's 818, in front of the whole crew.

Kathy is not happy with Lisa Rinna and her sister Kyle. #RHOBH pic.twitter.com/tkPOUAJvom

"Can I try a little shot of that 818 tequila? I want to see what that tastes like," she asked the bartender. "I just want to try it because it's my friend Kendall Jenner's tequila."

With that, Kathy was seething.

"I cannot f---ing believe what she just said," said Kathy to Kyle, as Rinna exclaimed how "sweet" the 818 tasted. "I'm ready to just go home," Hilton added, as her sister pleaded with her to not let it "ruin your whole mood."

"Oh no, I'm leaving. And don't say anything because if she brings it up, that's too f---ing disgusting," Kathy continued, before she then told the bartender she'd "really appreciate it" if they poured her tequila "so people can see" going forward.

"Don't say anything because I don't want to make it like an issue or anything," she then told Sutton Stracke and Garcelle Beauvais, before mocking Rinna and slamming her sister for not supporting her. "'Oh, I wanna try Kendall Jenner's 818,' in front of me, here right now, and Kyle doesn't do a f---ing thing. Come on, she doesn't say anything and I'm pissed off. I'm just gonna go."

With that, she walked out of the store and didn't return. In a confessional, Richards said that "once Kathy's mad, it's hard to turn that around."

"Listen, Kathy can be so much fun and funny. She can also be very difficult," added Kyle. "The part that bothers me so much is how much I let it affect me. That's what's different with friends versus sisters."

While Kathy seemed okay with both Kyle and Rinna later in the evening after cooling down, the episode ended with a tease of major drama to come.

"Several hours" after the women all went out to a club, text messages between Rinna and Erika Jayne flashed on screen.

"I got in a sprinter [van] with Kathy and she had an absolutely melt down I've never heard or seen anything like it in my life," wrote Rinna. "Anger screaming throwing things crying. Im locked in my room."

As Erika exclaimed, "OMG," Rinna added, "The hatred that just came out of her towards her sister ... im speechless." Kathy also sent a text to Rinna reading, "Silence is golden. I am staying silent."

The hour ended with a "To be continued..." and no preview of the fireworks to come.