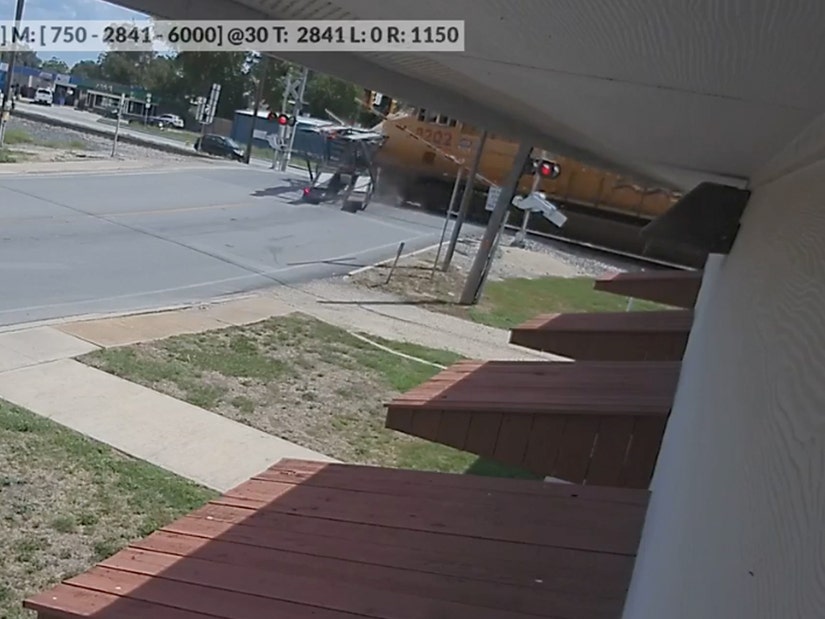 "This intersection has been an issue for many, many years," said the witness who shared the video to Facebook.

One truck driver got the scare of their lives this week in Texas, after its trailer got stuck on train tracks ... just as a train came roaring through town.

Security video which just happened to capture the full "truck vs. train accident" in Schertz, Texas on Thursday was shared on Facebook by a woman working at an office nearby. In it, around the 1:40 mark, a large truck with a trailer meant to transport other vehicles which was waiting at a light proceeds to cross the tracks -- before seemingly bottoming out and getting stuck.

Just as they get trapped in place, the crossing gates begin to drop as the red lights start flashing.

A train's horn can be heard getting louder and closer, as someone is spotted jumping out of the passenger side door, seconds before the train itself rams into the trailer and sends it flying down the tracks.

According to the Schertz Police Department, nobody was injured in the accident -- though it did take hours to clear and led to street closures for the next 4-7 days.

"This intersection has been an issue for many, many years. It has been reported to TX-DOT that large trucks cannot go over the tracks here because they bottom out," the woman who posted the video shared in the caption.

"They finally placed a sign on the corner (somewhat far from the tracks) warning the drivers. However, if the driver is told to take this specific route, that's what they do," she added. "Unfortunately some drivers haven't been as lucky as these guys today!"