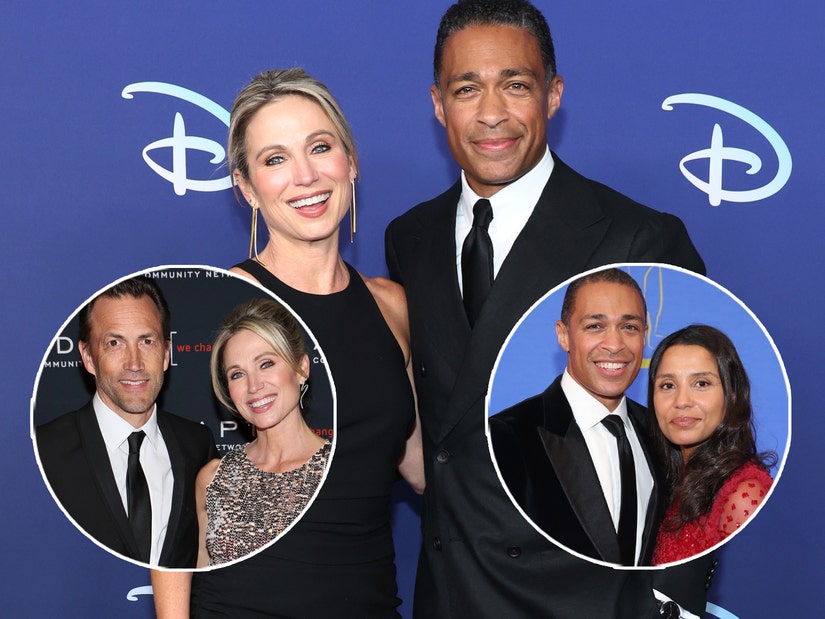 Robach's husband Andrew Shue appears to have purged his Instagram page of all photos of her, while she and Holmes have deleted their accounts.

Amy Robach and T.J. Holmes have gone from reporting the news to being right at the center of it after photos surfaced of the two "Good Morning America" hosts getting very close off-screen.

On Wednesday, the DailyMail published pictures showing the two grabbing lunch, traveling together to Upstate New York and holding hands in an Uber.

Both Robach and Holmes are married to other people; Robach to "Melrose Place" star Andrew Shue and Holmes to Marilee Fiebig, both since 2010. Holmes and Feibig also share a child, 9-year-old daughter Sabine. According to TMZ sources, the cohosts both separated from their spouses in August and "shortly thereafter" began a romantic relationship.

They reportedly planned to go public in the near future, after Amy's divorce was finalized, and were "blindsided" by the PDA pics.

Robach was MIA from Wednesday's edition of "GMA3: What You Need to Know," leaving Holmes to host the show solo. On Thursday, the pair cohost together for the first time since the photos surfaced -- but made no mention of the headlines surrounding them. They began the show with Holmes asking both Robach and Dr. Jennifer Ashton, "Who's looking forward to the weekend?"

"Ah, me!" responded Robach, raising her hand. The rest of the show continued without addressing the elephant in the room. Holmes, as many pointed out, was not wearing his wedding ring -- while Robach reportedly hadn't been wearing hers in recent social media posts.

After the DailyMail report, both Robach and Holmes deactivated their respective Instagram accounts.  One of Amy's most recent posts on there with Shue before shutting it down showed the pair with Holmes, as the cohosts trained together for the New York Marathon back in March.

Shue's Instagram page also appears to have been purged of any photos of Robach, though one post from November 2020 is still up in which he referred to her as his "running partner." Many of his posts have been flooded with messages of support for the actor.

Fiebig's page, meanwhile, has been set to private.

So far, Robach, Holmes, Shue nor Fiebig have commented publicly on the headlines.