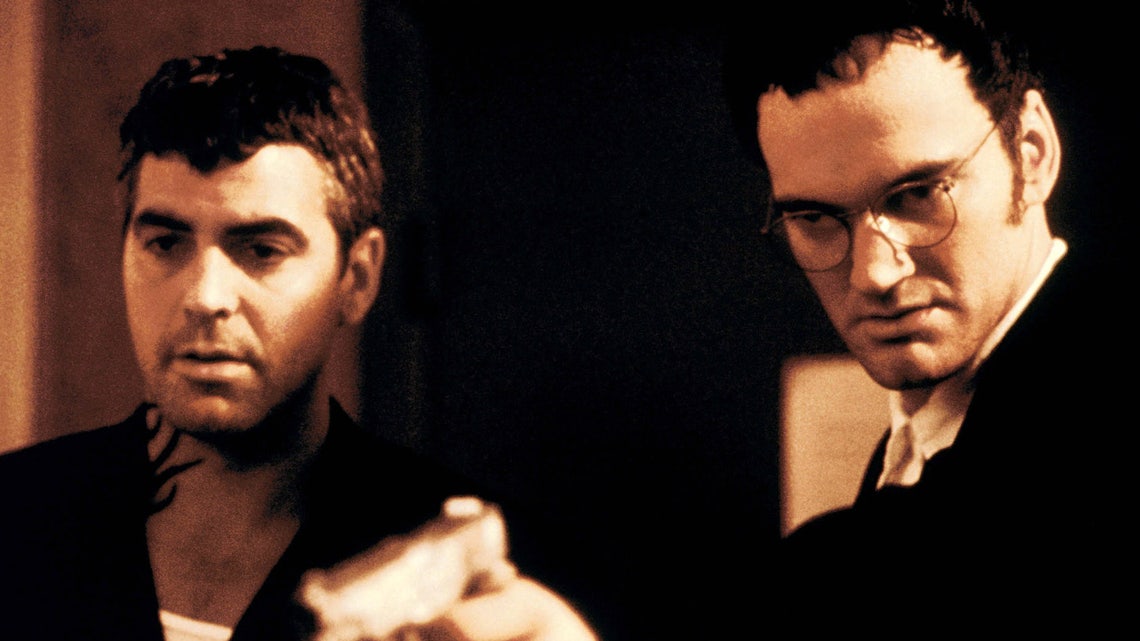 Everett Collection
Directed by Robert Rodriguez and written by Quentin Tarantino, "From Dusk Till Dawn" hit theaters January 17, 1996. In the 25 years since the Gecko Brothers had quite the run in with the amazingly-named Santanico Pandemonium and her vampire stripper friends, the stars of the film have continued to find massive success in the entertainment industry. Keep reading to see how they look now and what they've been up to!
1 / 11
George Clooney
Clooney was still appearing on "ER" when he starred in the horror flick, before leaving TV behind for film stardom. He headlined the "Ocean's Eleven" films, directed, starred in and earned two Oscar noms for "Good Night, and Good Luck," and won Best Supporting Actor for "Syriana" in 2006. He was praised for performances in "Michael Clayton," "Up In the Air" and "The Descendants" and produced the Oscar-winning "Argo." Following relationships with Renee Zellweger, Elisabetta Canalis and Stacey Keibler he got engaged to and married Amal Alamuddin. They're parents to twins Ella and Alexander. 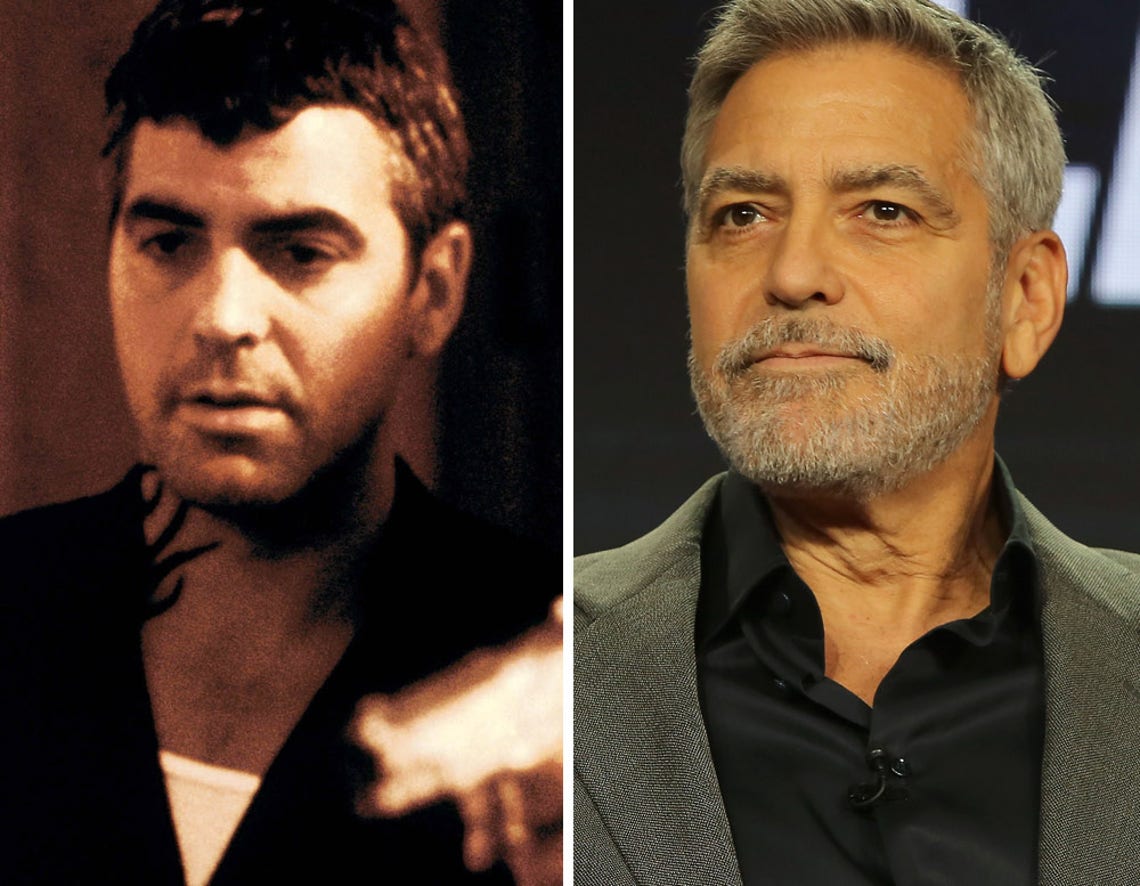 2 / 11
Quentin Tarantino
After playing Richard Gecko in the film, which he also wrote, Tarantino would write and direct the critically acclaimed films "Jackie Brown," the two "Kill Bill" movies, "Grindhouse: Death Proof," "Inglorious Basterds," "Django Unchained," "The Hateful Eight" and "Once Upon a time In Hollywood." He married Daniella Pick in 2018 and the two welcomed son Leo in 2020. 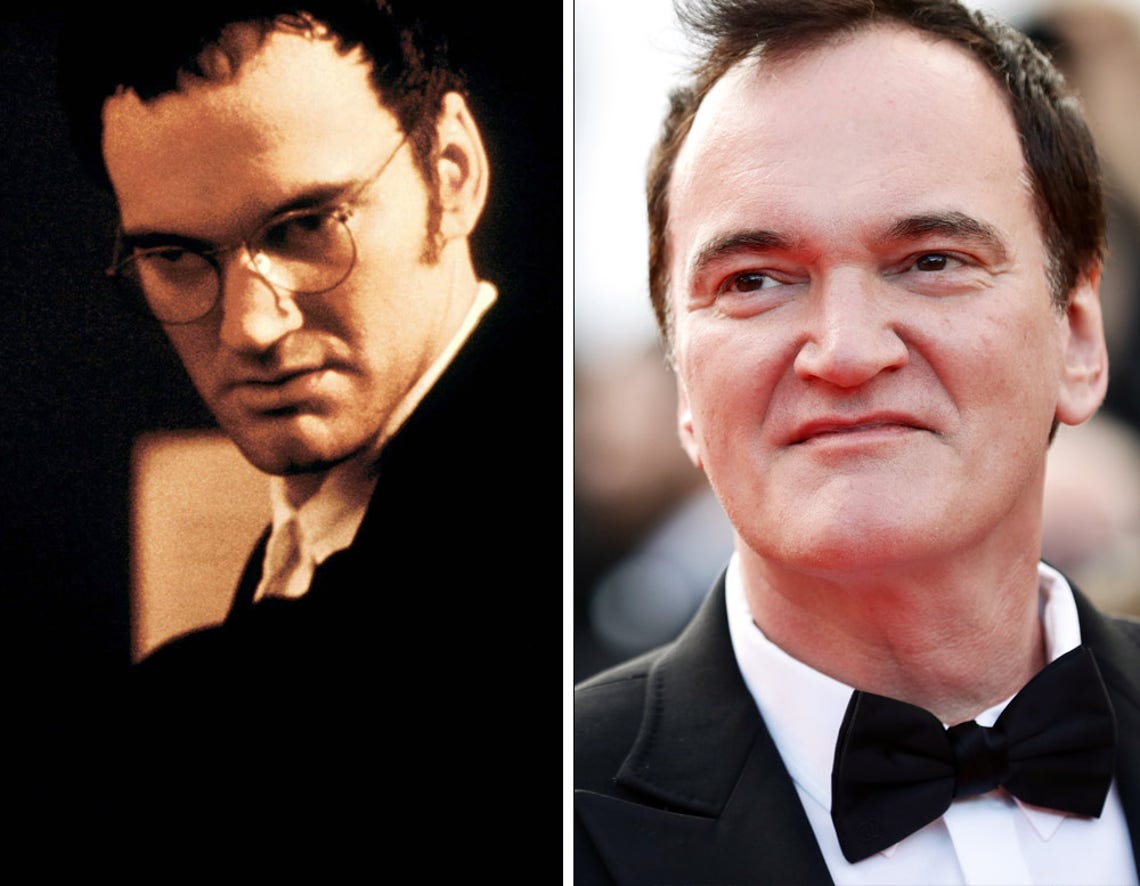 3 / 11
Harvey Keitel
After starring as priest Jacob Fuller, Keitel went on to appear in "Cop Land," "U-571," played Satan in "Little Nicky," the "National Treasure" films, "The Ridiculous 6," "The Grand Budapest Hotel" and "The Irishman." In 2001 he welcomed son Hudson with Lisa Karmazin and married wife Daphna Kastner the same year. They welcomed son Roman in 2004. He also shares daughter Stella with ex-wife Lorraine Bracco. 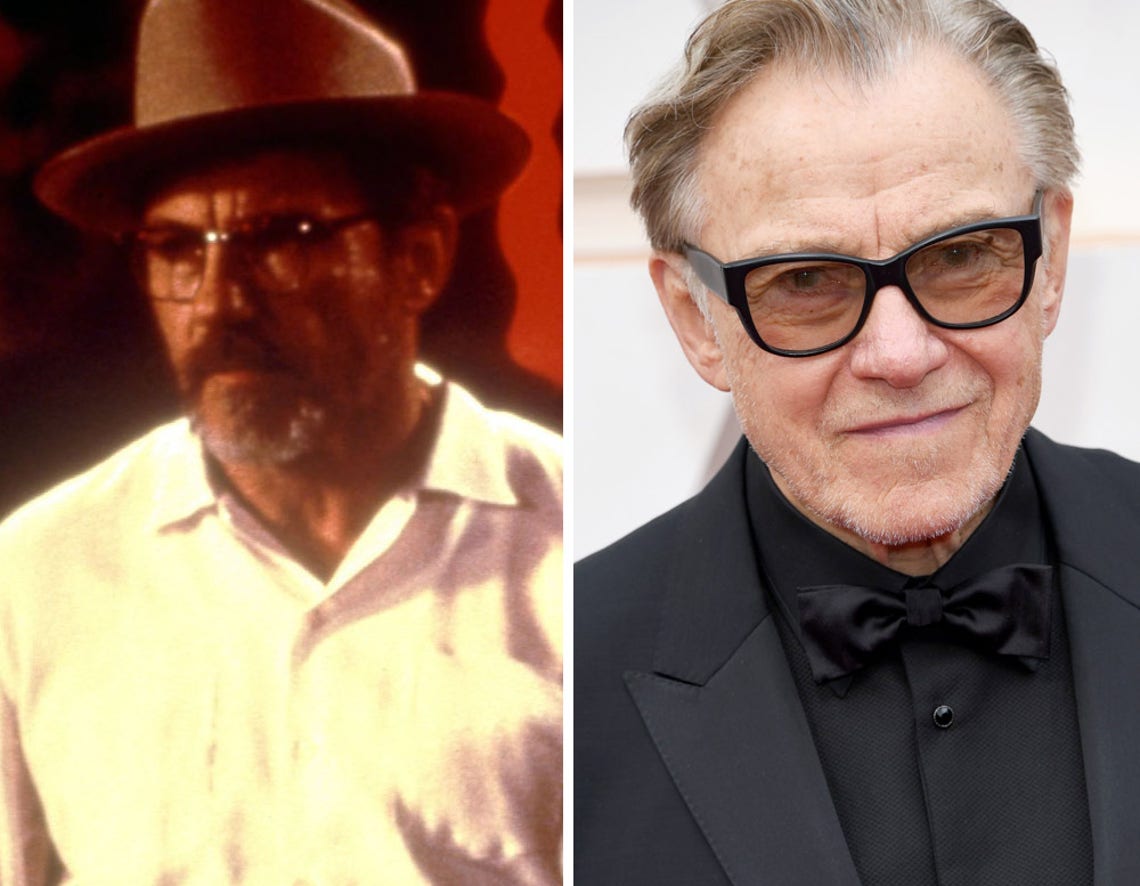 4 / 11
Juliette Lewis
After starring as Kate Fuller in the "From Dusk Till Dawn," Lewis starred in "The Other Sister," "Old School," "August: Osage County" and "Ma." On the TV side, she also appeared in "The Firm," "Secrets and Lies," "Wayward Pines," "The Conners" and "Filthy Rich." Lewis is a Scientologist and also a musician -- and has released five albums. She was married to skateboarder Steve Berra from 1999-2003. 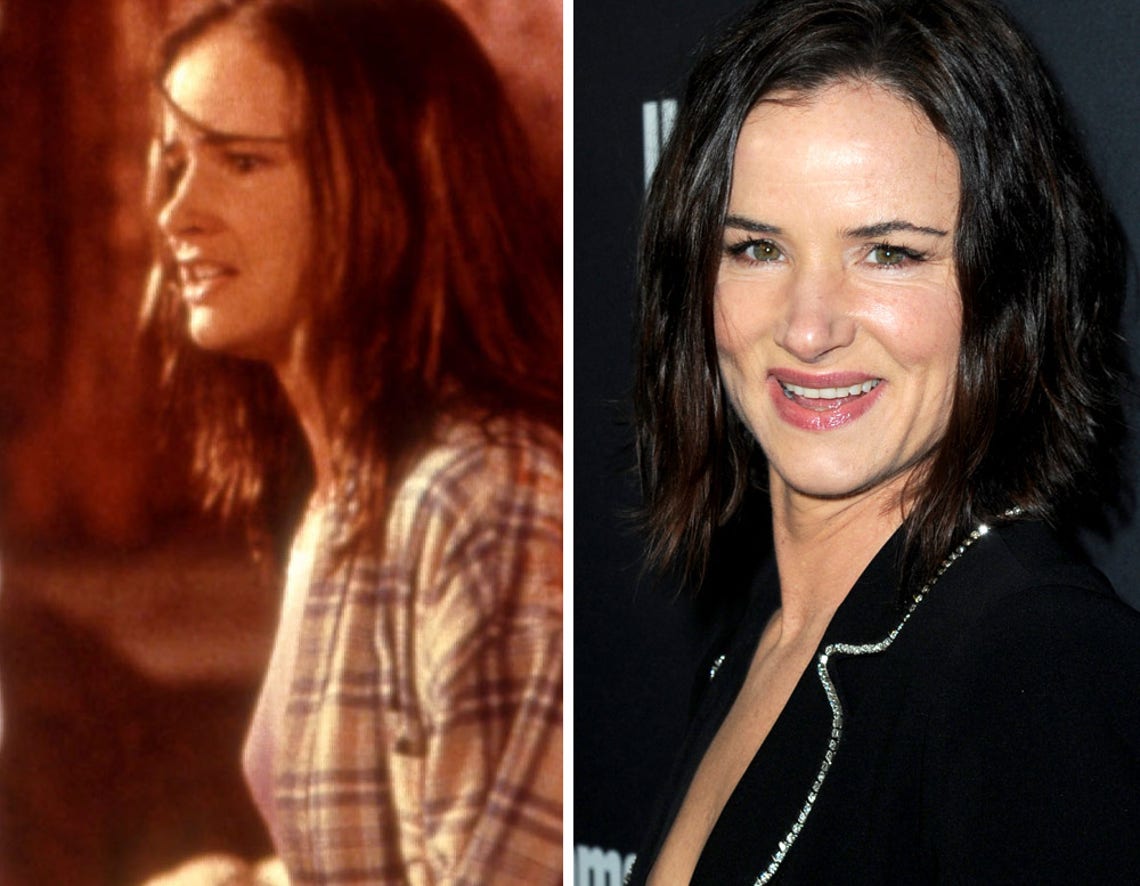 5 / 11
Salma Hayek
After stealing the show as Santanico Pandemonium, Hayek would work with director Robert Rodriguez again for "The Faculty," "Sky Kids" and "Once Upon a Time In Mexico." She was nominated for an Oscar for her work in "Frida" and has appeared in films including "Fools Rush In," "Grown Ups," "Savages" and the upcoming Marvel film "Eternals." She and François-Henri Pinault welcomed daughter Valentina in 2007, before tying the knot in 2009. In 2017, she claimed Harvey Weinstein sexually harassed her and threatened to kill her during the making of "Frida." 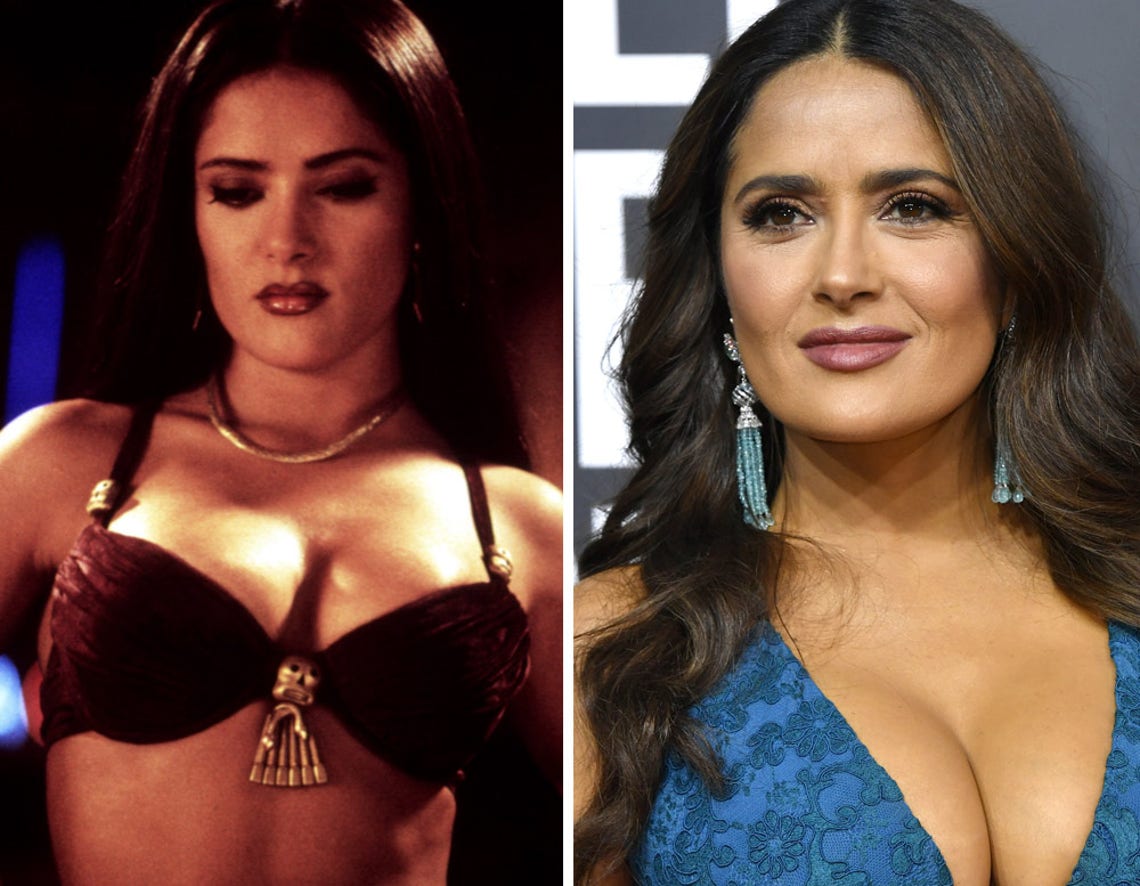 6 / 11
Cheech Marin
Marin had multiple roles in the film and later appeared in Rodriguez's "Sky Kids" films, "Machete" and "Once Upon a Time In Mexico." He also starred on "Nash Bridges" and voiced "Beverly Hills Chihuahua," a heyena in "The Lion King" and Ramone in the "Cars" movies. He released a documentary about the Chicano Art Movement in 2019. Marin -- who has been divorced twice and has three children with his exes -- married Russian pianist Natasha Rubin in 2009. 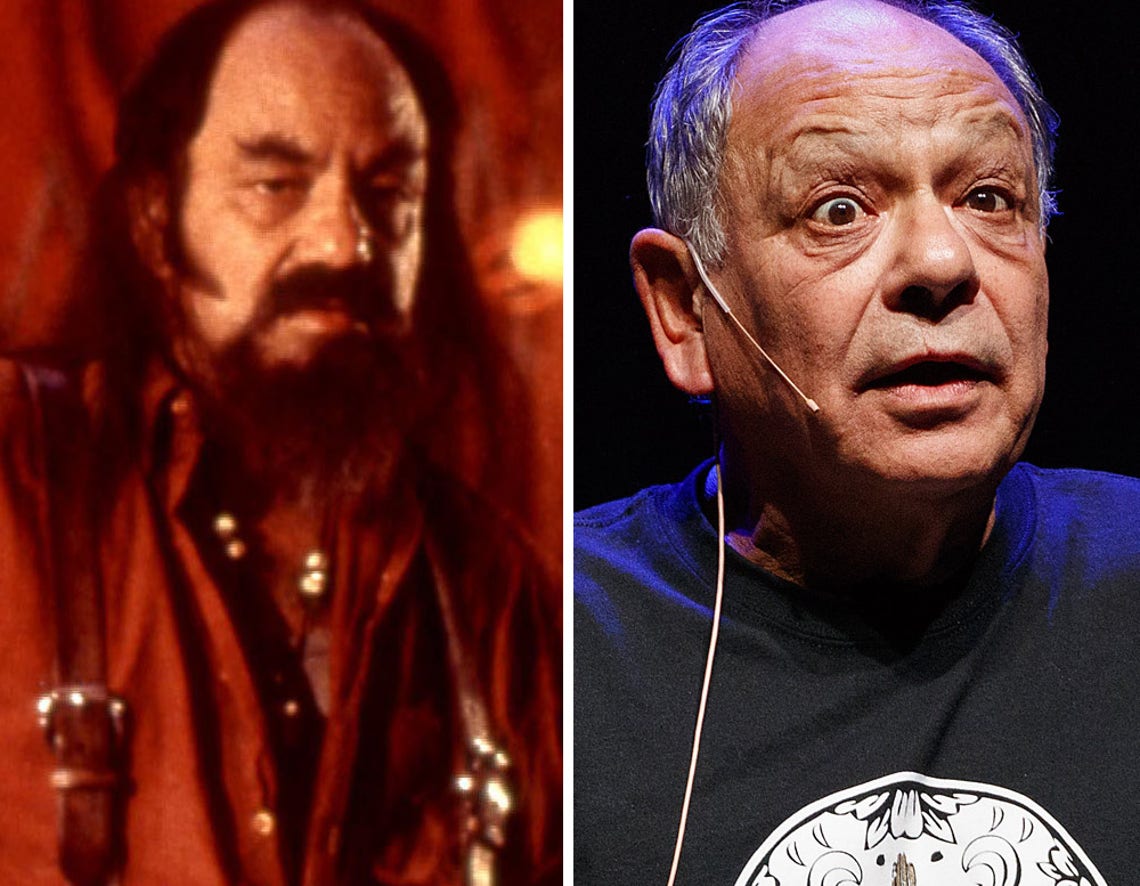 7 / 11
Danny Trejo
Trejo is one of Robert Rodriguez's most constant collaborators, appearing in "Spy Kids," "Once Upon a Time In Mexico," "Machete," "Machete Kills" and "Predators," which Rodriguez produced. He's also appeared in numerous Rob Zombie projects, "Sons of Anarchy" and both the "From Dusk Till Dawn" sequels and TV reboot. He's also a restauranteur, with both taco and donut shops in Los Angeles. 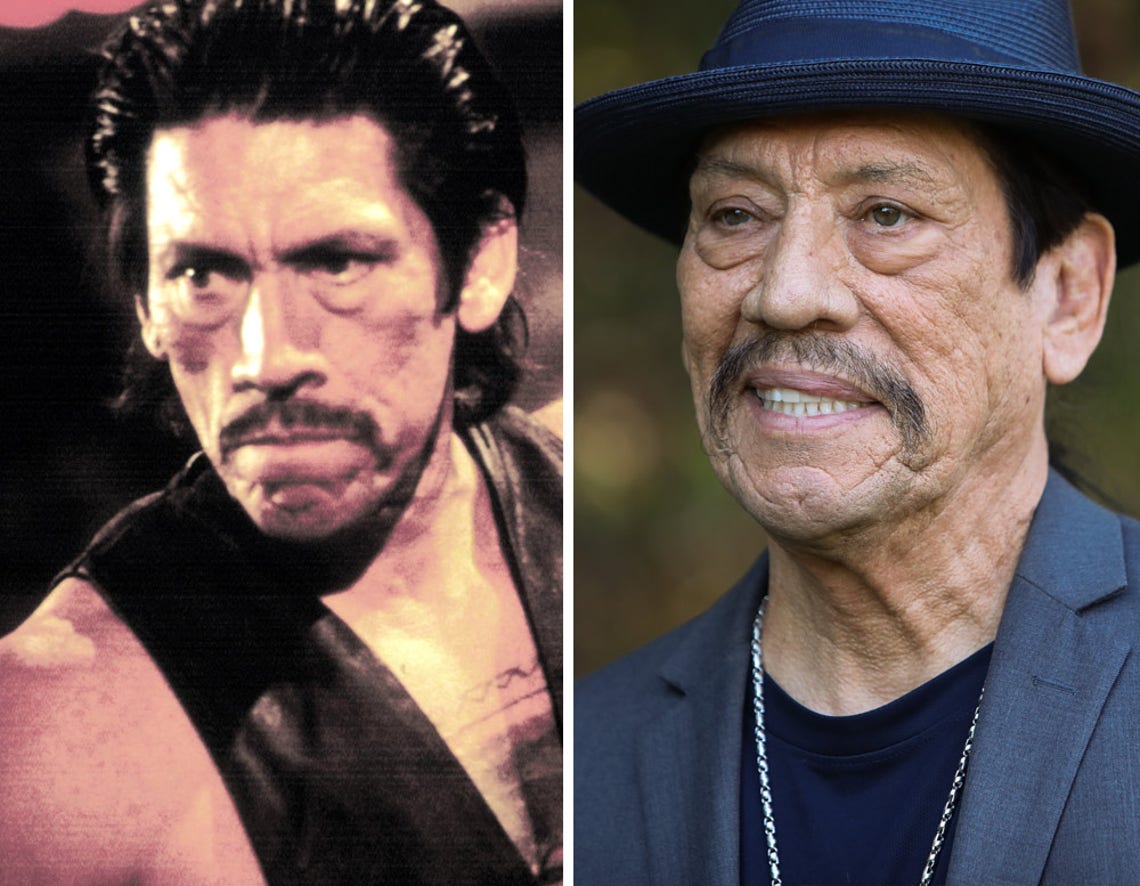 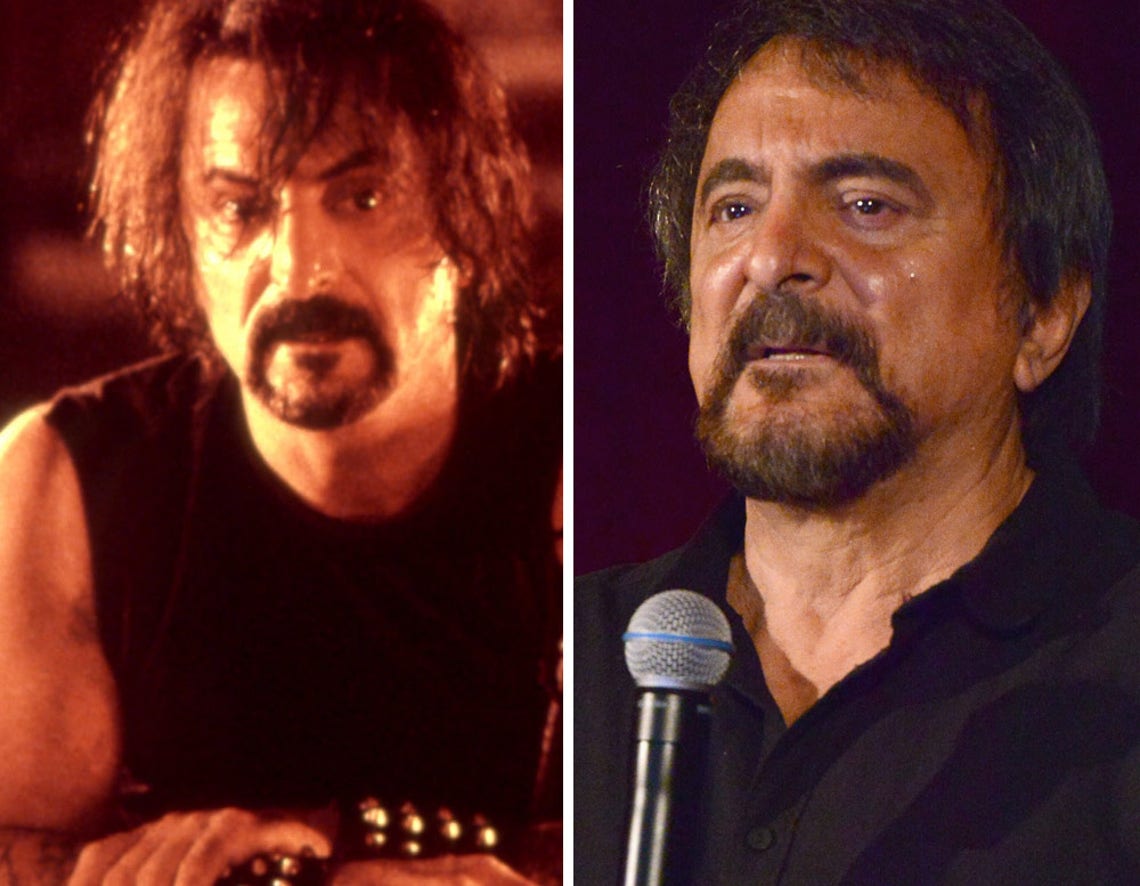 9 / 11
Fred Williamson
After playing Frost, Fred Williamson went on to appear on the TV series "Fast Track" and "Being Mary Jane," as well as films including "Whatever It Takes," "Carmen: A Hip Hopera," "Starsky & Hutch" and "VFW." Williamson was accused of groping an assistant costume designer while filming "VFW," but denied anything "inappropriate" happened. He also introduced Donald Trump at an Indiana rally in 2016. 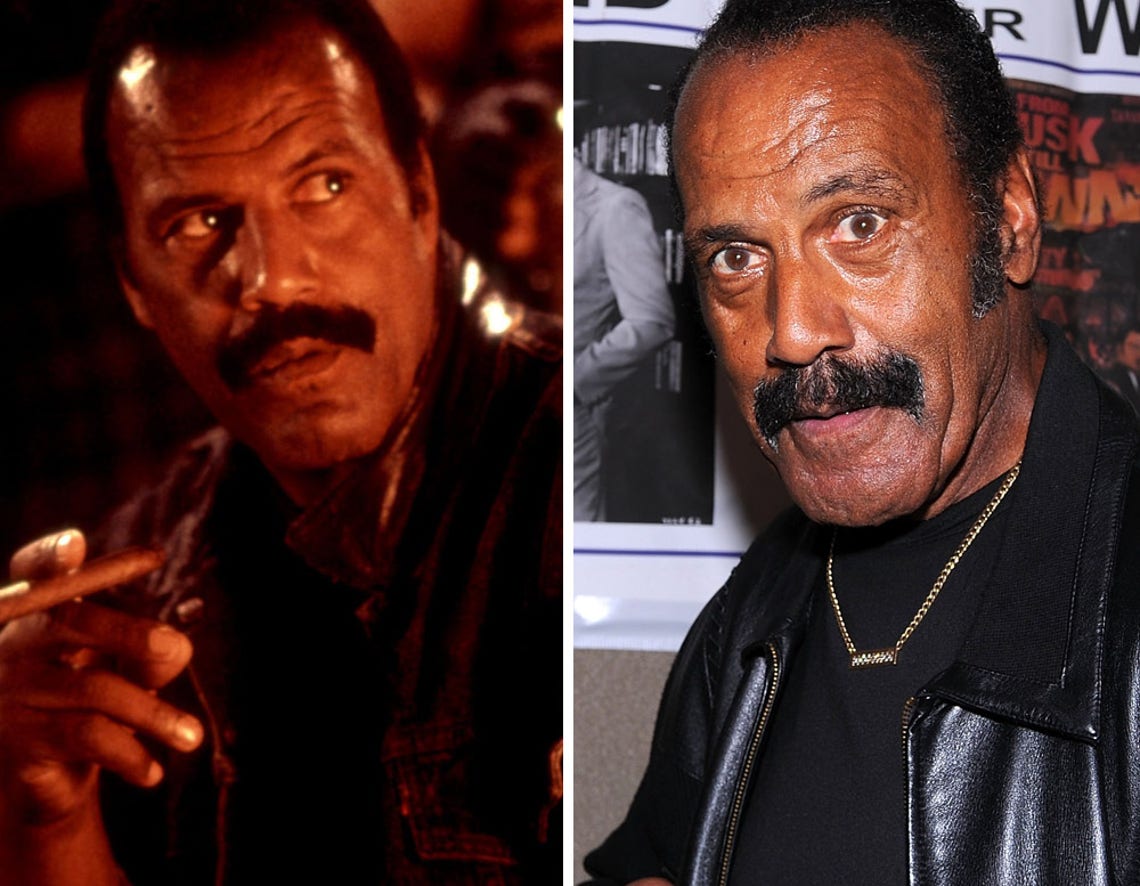 10 / 11
Kelly Preston
Kelly Preston briefly appeared as newscaster Kelly Houge in the film, before appearing in "Jerry Maguire" later that year. She also starred in "Jack Frost," "What a Girl Wants," "The Cat In the Hat," "Sky High" and "Gotti" with husband John Travolta. She and Travolta -- who were both Scientologists -- had three children; daughter Ella, son Benjamin and son Jett, who died in 2009. Preston died at the age of 57 in 2020, after a private breast cancer battle. 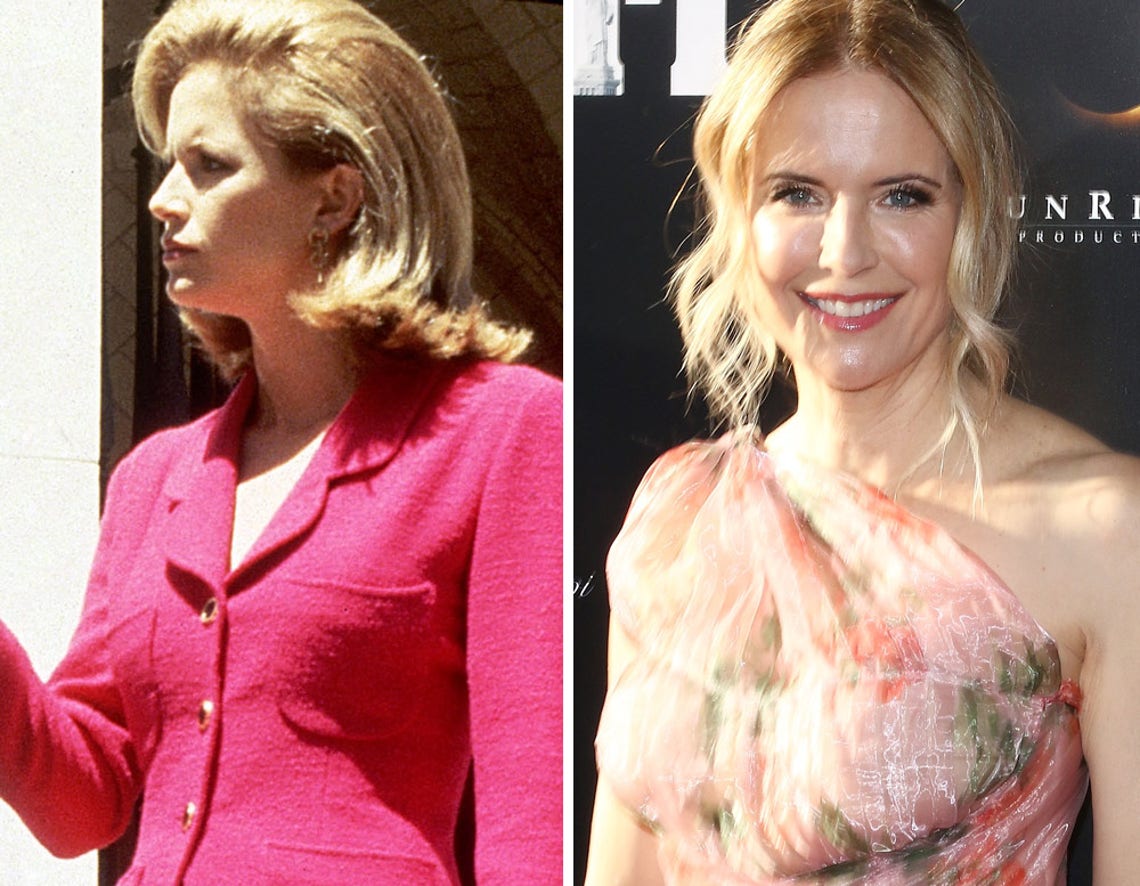 11 / 11
Robert Rodriguez
After directing "From Dusk Till Dawn," Rodriguez would direct other genre films including "The Faculty," "Spy Kids," "Once Upon a Time In Mexico," "Sin City," "Grindhouse: Planet Terror," "Machete" and "Alita: Battle Angel." He also directed the "From Dusk Till Dawn" TV show, episodes of "The Mandalorian" and will helm the upcoming "Book of Boba Fett" series. He and wife Elizabeth Avellan split during the making of "Grindhouse," during which he reportedly started dating Rose McGowan. They split in 2009. He also walked "Spy Kids" star Alexa Vega down the aisle during her 2010 wedding. 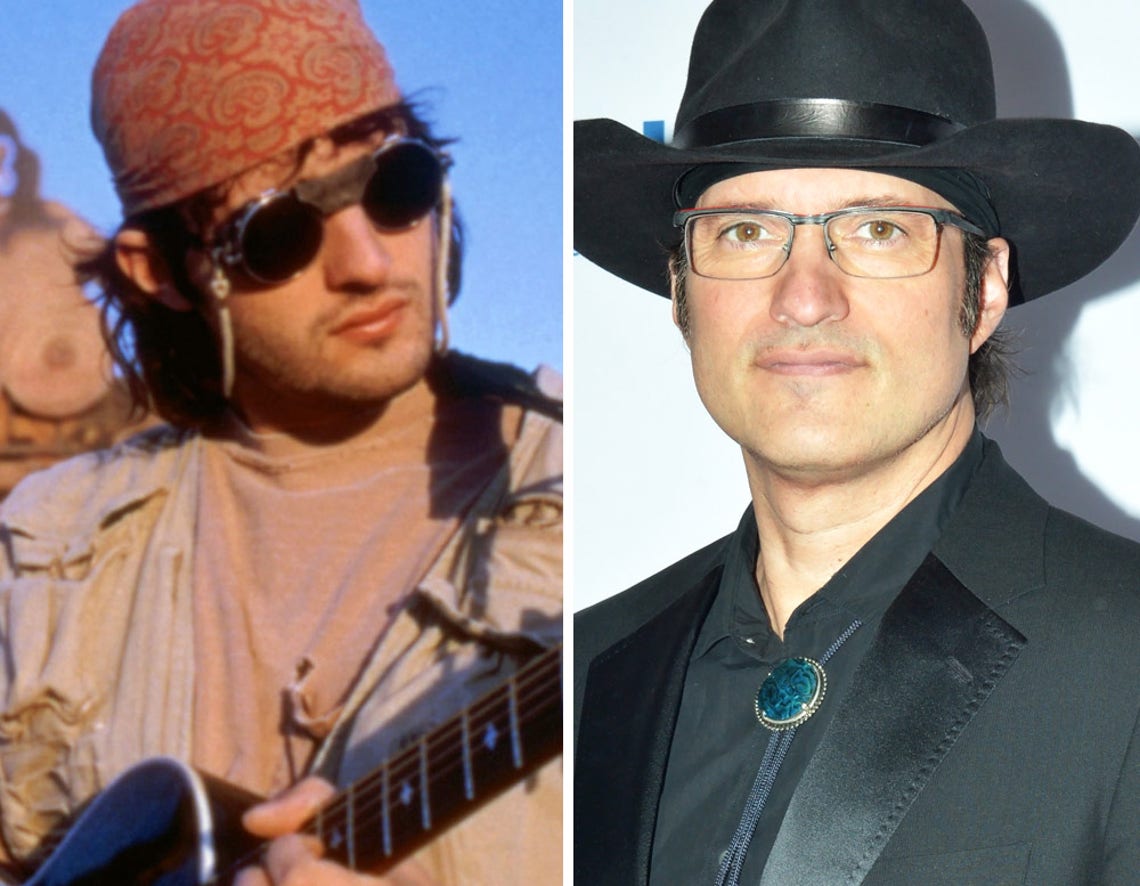 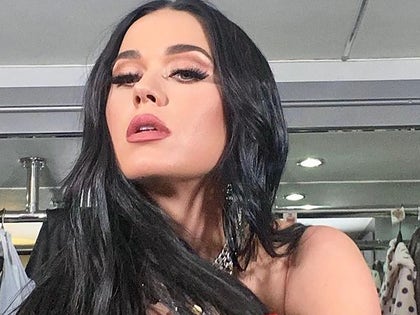 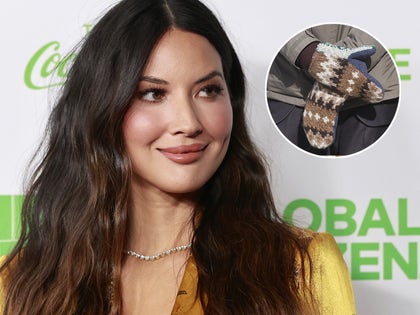 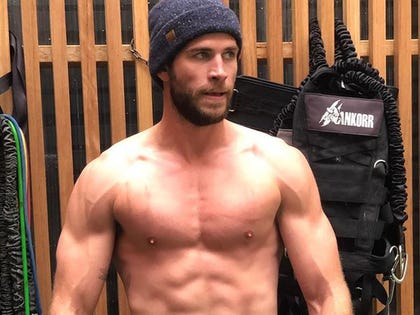 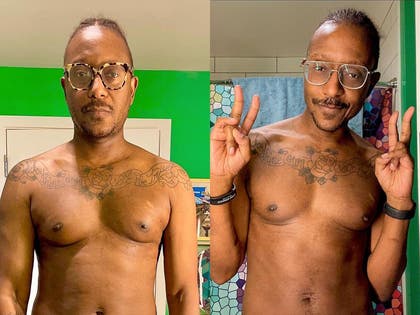 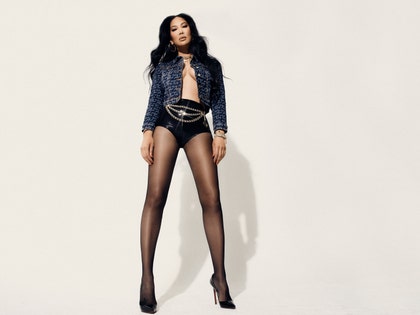