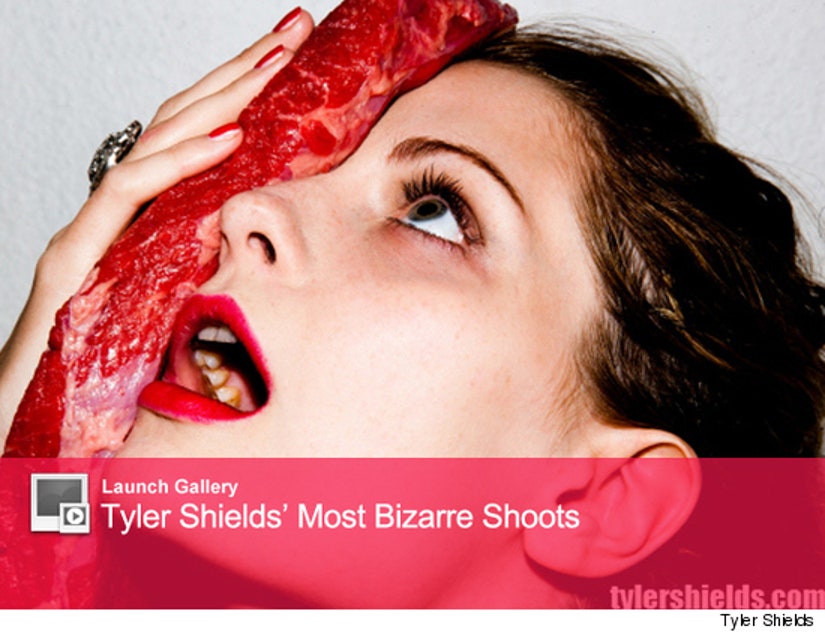 The former "OC" star recently posed for sometimes-controversial photographer Tyler Shields -- where she's seen chewing on steak and pressing it against her face ... and the animal rights group is none too pleased.

PETA tells TooFab "This raw meat stuff is getting old and may not only hurt and kill cows, it may hurt Mischa, because so much meat is infected with salmonella, E. coli, and campylobacter that licking it is like licking a toilet."

The statement continues, "In addition to this being completely unoriginal, it's completely callous—flesh from a tortured animal isn't a joke, isn't camp, and isn't cool. Meat is full of blood, is produced with violence, and causes great suffering. So if that's the look they were going for, too bad: They could have taken a leaf out of the playbooks of Pamela Anderson and Alyssa Milano, two PETA pinups who have shown off their natural beauty in outfits made of lettuce leaves for PETA's "Let Vegetarianism Grow on You" campaign."

In an exclusive statement to TooFab, Shields says "I did not kill the cow, I just bought the meat. If they feel like I should be using lettuce instead of meat, I will see if I can work that into something."

He adds, "I don't attack them for being non-meat eaters so I hope they can respect my choice as a human to eat it."

Shields is no stranger to controversy: His shots of Heather Morris with a black eye were criticized for glamorizing violence towards women, his racy session with Alex Pettyfer led to Alex's split from Dianna Agron and the shoot with the cast of "Vampire Diaries" ended with them all getting arrested for flashing.

Check out more of his unique celebrity portraits above.

Whose side are you on here? Sound off below.