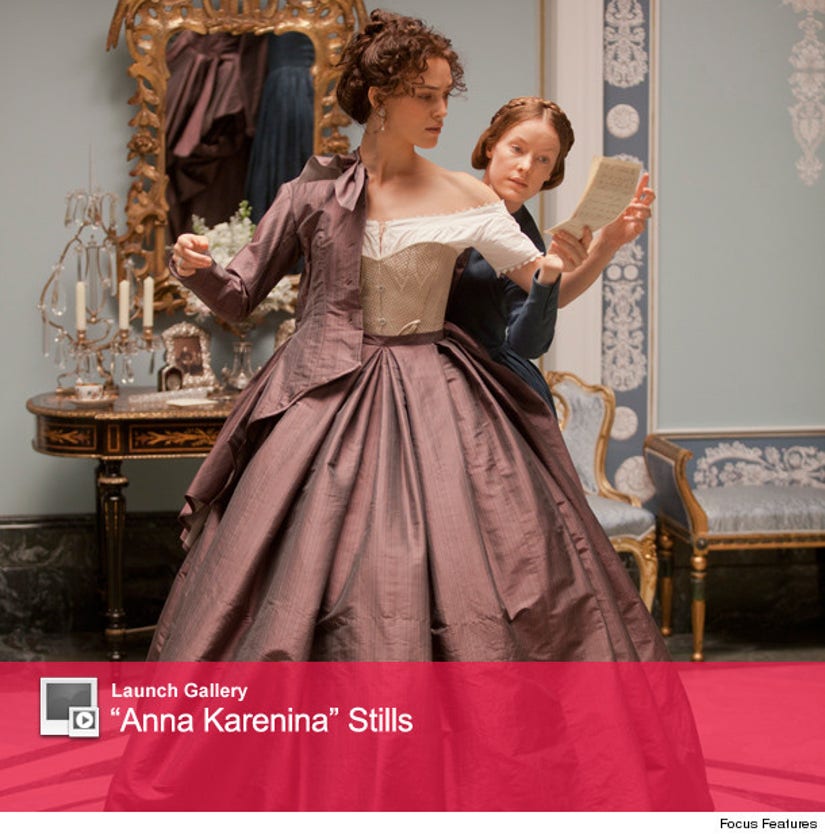 "F--k no," Keira Knightley said with a laugh.

That was the "Anna Karenina" star's reply when asked if she loved wearing the costumes from the film.

The process of transforming the British actress into Leo Tolstoy's Russian socialite took three hours per day: two hours in hair, make-up and costume before shooting, and an hour to get out of the elaborate looks afterwards.

The rigorous process is par for the course for period pieces, and Knightley joked that she didn't want to do a period film for awhile. But all kidding aside, Keira and costume designer Jacqueline Durran put a tremendous amount of work into dressing Anna and the supporting cast, making clothes an integral part of the storytelling.

"Every one of those costumes have an amazing amount of symbolism," Knightley told toofab and other select journalists. "They were all totally part of telling that story: the idea she was a caged bird, the cage [hoop skirt] underneath the dress; the idea of keeping death close to her at all times, she's wrapped in fur and she's got dead birds in her hair; the jewelry is the hardest of stones that can slit her throat at any moment; keeping sex there all the time, the dresses that look like lingerie." 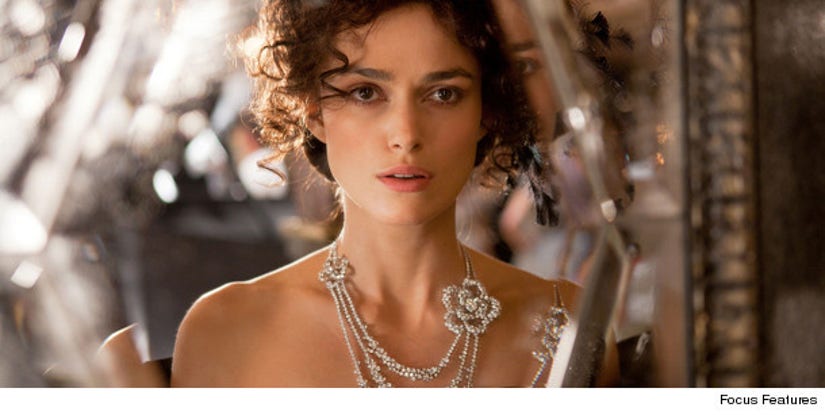 "That's why i love working within fantasies," the actress said, wistfully adding "I would like to keep the diamonds."

And rightfully so...all of the lavish jewelry used in the film was real.

"[Anna] lived in this rarefied world of late 19th century Russia where there was an extraordinary amount of wealth," Durran explained. "It seemed to play into the setting of her world, and into the vanity of Anna as a character to have a wide range of jewelry and to wear it extensively."

"Once we decided she was going to be wearing diamonds and pearls a lot, we approached Chanel -- with whom Keira has a relationship -- and they were more than willing to help us. We went to Paris and they gave us free reign to chose any pieces that we wanted."

That freedom made Knightley feel like a kid in a candy store.

"In the morning, Keira would be presented with a tray of diamonds from which to choose what to wear for the day," Durran continued. "That exact excitement [Keira felt] about luxury and glamour feeds into the idea of Anna. I loved watching the jewels on screen. Nothing sparkles like diamonds."

You can see the result of Durran's work by clicking "Launch Gallery" above, and also on the big screen. "Anna Karenina" opens in theaters nationwide today.