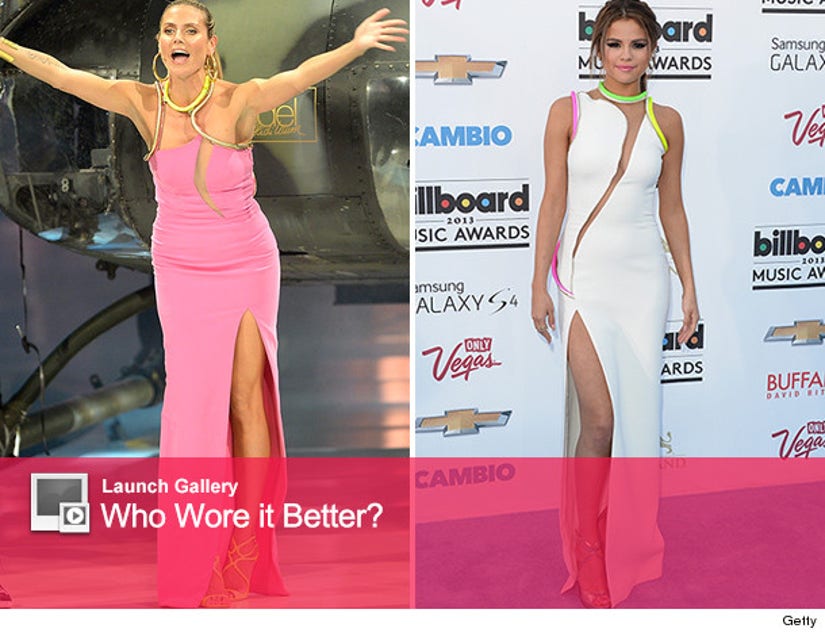 Heidi Klum wore a pink version of this Atelier Versace Spring 2013 dress on the "Germany's Next Top Model" finale (where she was accosted by topless protestors) on Thursday. The 39-year-old supermodel paired it with neon Jimmy Choo "Lance" sandals that matched the piping around her neckline. A pulled-back ponytail and giant hoop earrings completed her look.

Selena Gomez wore a white dress from the same collection with the same details -- neon piping, cut-out bodice and sky-high slit -- to the Billboard Music Awards earlier this month. The 20-year-old also opted for a ponytail, but wore silver Jimmy Choo sandals instead.

So who wore it better? Personally, we're not huge fans of these dresses -- they're a little too much Coachella meets couture. Versace is known for it's impeccable detailing, but the neon piping looks like glowsticks.

Heidi may be twice Selena's age, but her body is still rocking. Unfortunately the color and giant hoop earrings are a bit too tacky for our taste. So Selena gets the nod from us, even though her hair wasn't our favorite.

It's your vote that counts, though. Cast it and see other dueling dresses by clicking the "Launch Gallery" above!