Cussing, finger pointing, and dramatic exits? No, we're not talking about "The Real Housewives." On Thursday's episode of "Project Runway," things got so heated one designer was ejected from the competition -- permanently.

For this week's challenge, the contestants had to create garments incorporating bowties from Tie The Knot, an organization co-founded by "Modern Family" star Jesse Tyler Ferguson. Tie The Knot supports marriage equality through online sales.

Normally, the contestants with the top three and bottom three designs are held back for judges' evaluations -- the rest are safe and ushered away. Designer Sandro Masmanidi found himself in the safe group, but after weeks of being frustrated with a lack of feedback, he wouldn't leave the stage until he got some. Sandro's disruption didn't sit well with judge Zac Posen, resulting in this extremely uncomfortable exchange:

"It was shocking," Jesse told toofab's Lawrence Yee in a call earlier this week. "Zac was distraught over [Sandro's] outburst." The "Modern Family" star could tell something was up even before the runway show. "Tim [Gunn] wanted to show people how to tie a bow tie and [Sandro] came up. And I thought he was extremely charming and handsome and was like, 'Oh this will be fun.' But then I saw eyerolls from the group and knew there's stuff going on her between this guy and everyone else."

Things got even more intense when Sandro and the other safe contestants gathered backstage. When designers Helen Castillo and Ken Laurence chastised Sandro for speaking out of turn, that set him off. Watch his camera-smashing exit:

Sandro was ejected from "Project Runway" but the episode did end on a high note. Designer Bradon McDonald -- who won the Tie The Knot bowtie challenge -- took his moment in the spotlight proposed to his boyfriend of 18 years. Watch the touching moment below:

"I was moved to tears," Jesse told toofab. "It was stunning to see such an act of love. I can't wait to see an update."

"We didn't wear one of our [Tie The Knot] bow ties because we felt like the groom should no have the danger of possibly wearing the same bowties with anyone else in the room," Jesse joked, instead opting for suits and ties by Band of Outsiders. A custom bowtie with their names and wedding and the date of their wedding was handed out as a favor.

Which moment was more dramatic? Sandro's exit or Bradon's proposal? Tell toofab in the comments below and check out the exclusive shot of Jesse, Nina Garcia, Heidi Klum and Zac Posen from "Project Runway" below! 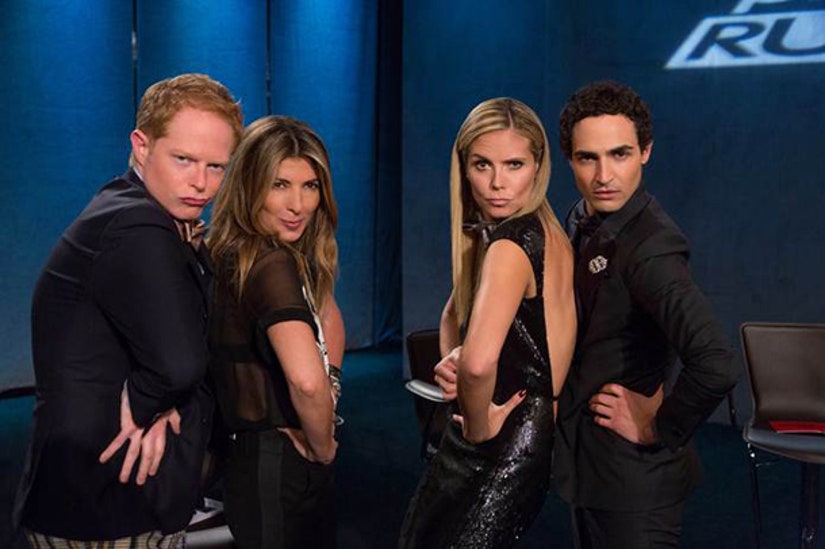