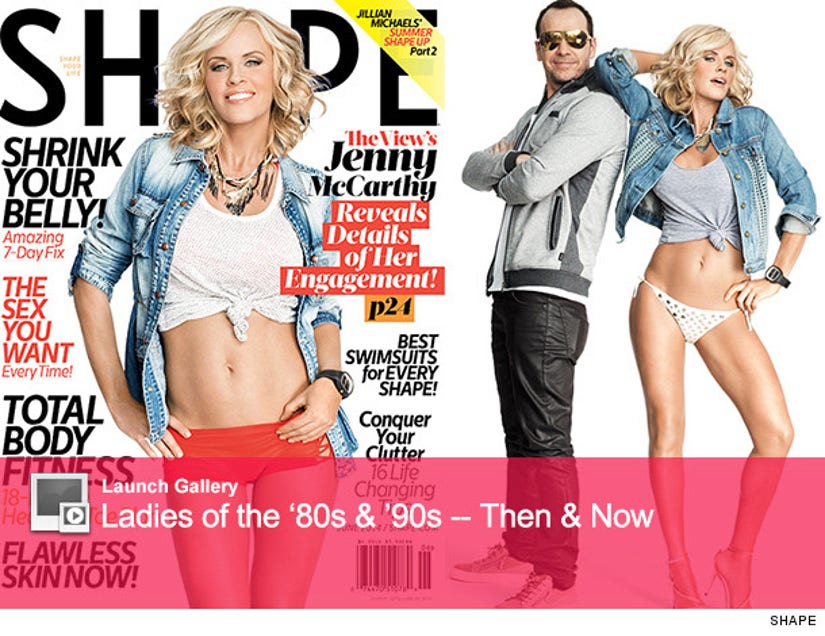 Jenny McCarthy is fit and fabulous!

"The View" cohost graces the cover of the June issue of SHAPE magazine, where she's talking about everything from family and fitness to her fiance Donnie Wahlberg.

The 41-year-old beauty, who shows off her hot bod in a red booty shorts and a white crop top, admits that she doesn't depend on a scale to maintain her weight.

"The last time I weighed myself was 12 years ago, when I left the hospital with my newborn son, Evan, and I was 185 pounds," she tells the mag. "Now I measure by how my jeans fit. But I want to be real here and tell you that my weight goes up and down a lot."

So, how does she drop those unwanted pounds? "I was definitely up after the holidays last year, so I tried what everyone always says to do: running. I was on that treadmill every day for 45 minutes," she explains. "I didn't do anything fancy with intervals to spike my pulse rate, because I have palpitations and my heart can't handle the intensity. I did a moderate pace and kept it there the whole time. After a few weeks, the extra weight dropped off."

The blonde bombshell also opens up about the first time she saw her hubby-to-be.

"The very first time I saw him, I was in eighth grade and New Kids on the Block was on MTV. I was like, 'Who are they?' I thought Donnie was the hottest one but too tough for me, because I was this goody two-shoes," she reveals. "But now when I look at him, I think, 'I'm totally marrying a New Kid on the Block.'"

What do you think of Jenny's candid comments? Tell toofab in the comment section below, and click "Launch Gallery" above to see more of your favorite ladies from the 80's and 90's, then and now.