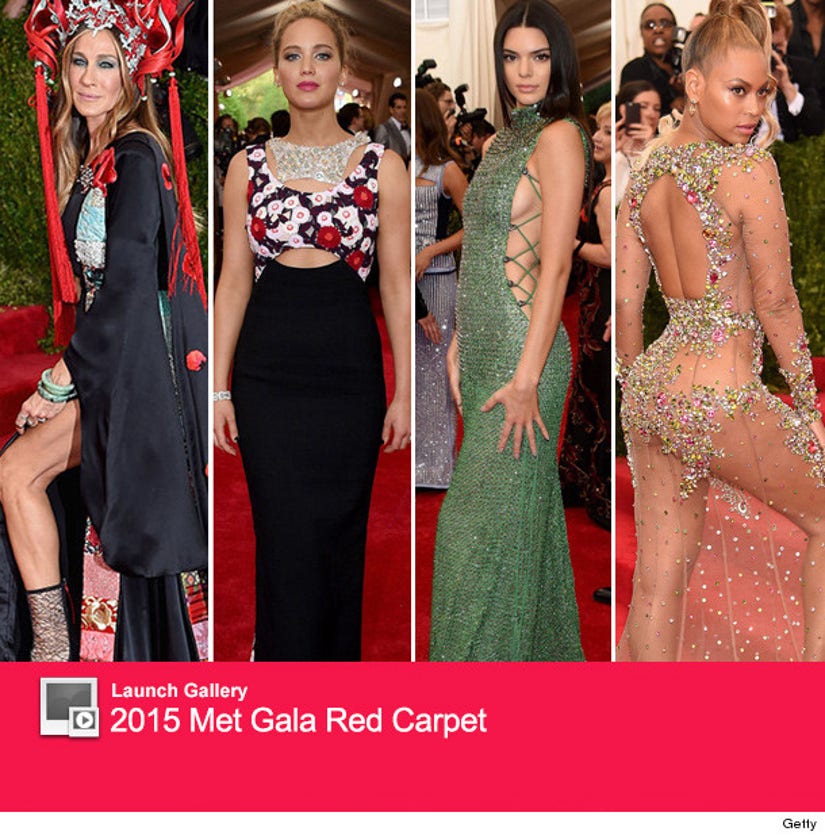 The Super Bowl of fashion is here!

No, not the Oscars ... the annual Met Gala, where only the most stylish stars show off some killer couture on the red carpet.

The theme of this year's event is China: Through the Looking Glass, emphasizing how the country's fashion has influenced style around the world. Jennifer Lawrence, Gong Li ("Memoirs of a Geisha"), Yahoo! CEO Marissa Mayer, Wendi Murdoch, and Vogue's Anna Wintour all serve as co-chairs for this year's big night.

J-Law was one of the first to hit the red carpet, wearing a poppy-covered Dior dress that showed off a hint of her tight tummy. The "Hunger Games" star wore her hair up and sported a pink lip for the event.

Sarah Jessica Parker arrived shortly after, going all out with the drama by wearing a show-stopping headpiece from Philip Treacy. As for her equally-dramatic dress, she reportedly designed it herself with the help of H&M.

Kendall Jenner was gorgeous in green, showing some serious side-boob in the lace-up frock from Calvin Klein ... while Beyonce showed even more skin in a glittery gown that barely covered all her lady bits. 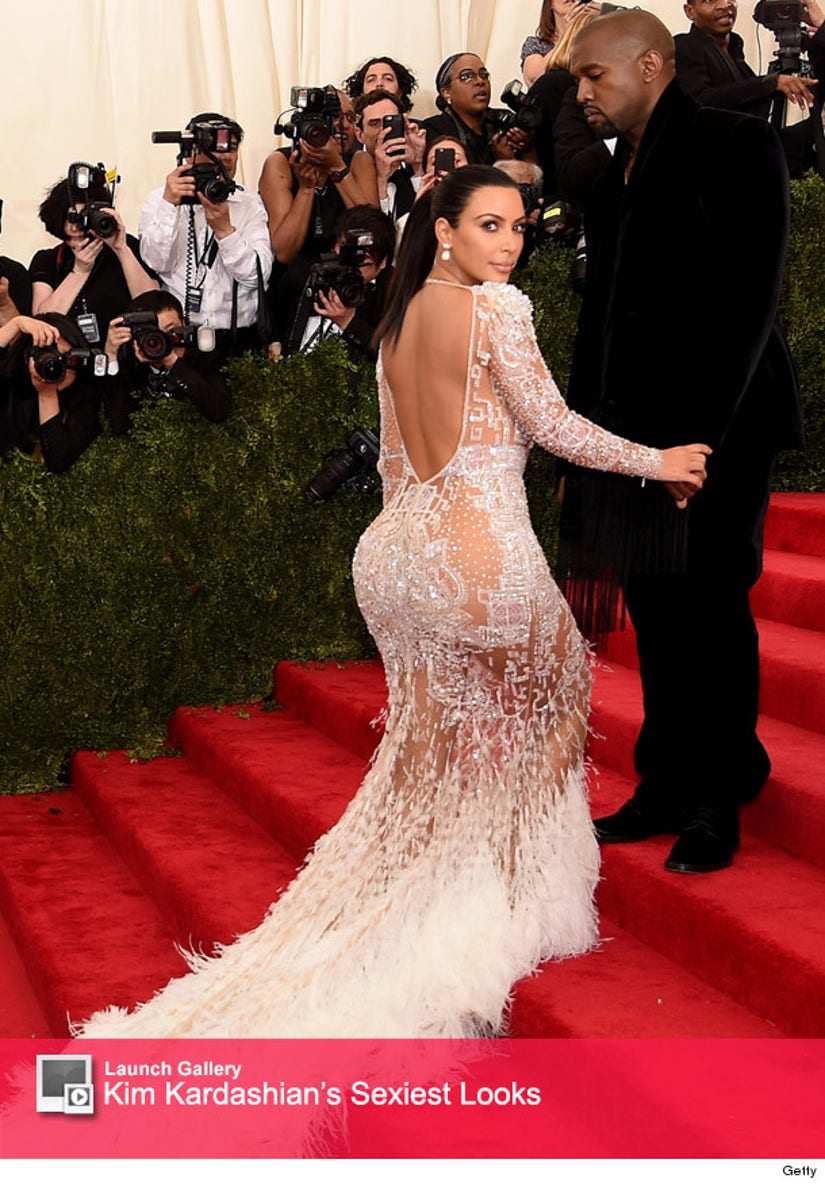 Sister Kim Kardashian put her booty on display in this one-of-a-kind design from Roberto Cavalli. Between the sheer material to the feathers and exposed back, we barely noticed Kanye West in this photo!

The reality TV star has some a long way from her disastrous pregnancy look back in 2013. 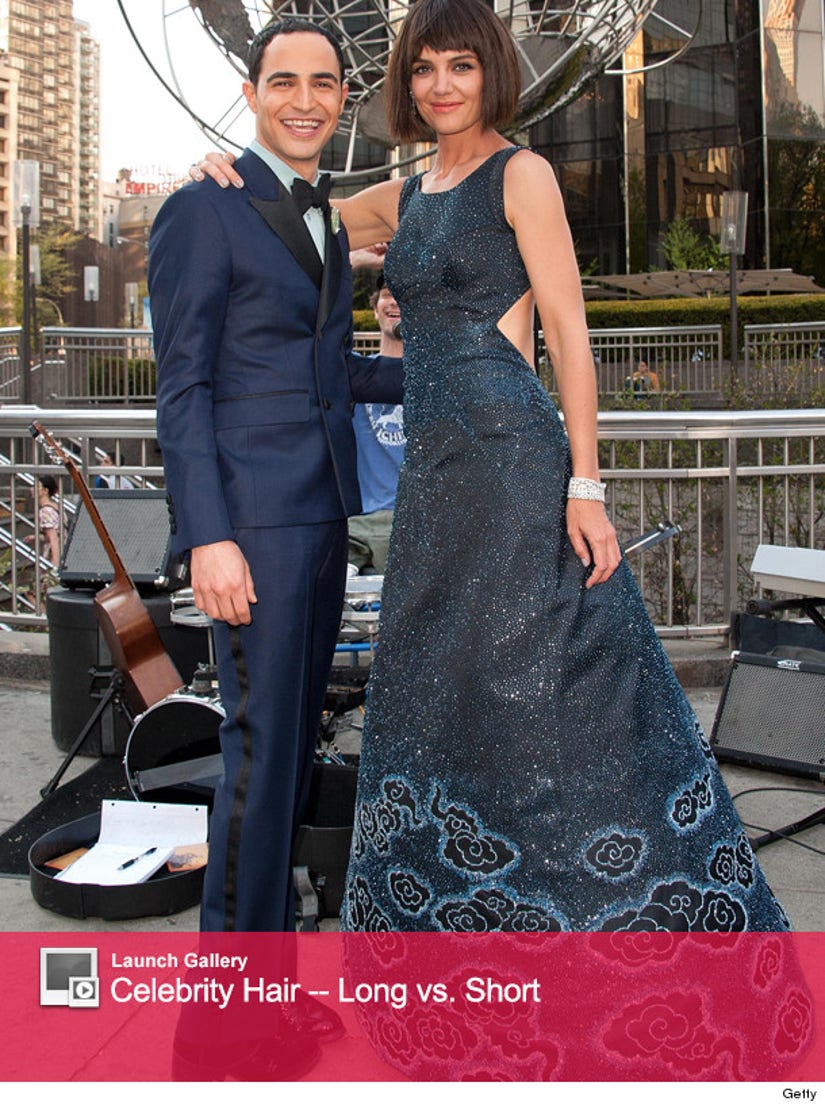 Katie Holmes shocked us all by showing up with a dramatically different 'do. Dressed in a navy metallic Zac Posen creation, the actress rocked a very short bob ... one that was very reminiscent of the look daughter Suri Cruise used to sport!

There's been a wild debate online about whether it's her real hair or just a wig. While she did post a ton of Instagram pics teasing a new cut, many think this new style is only temporary -- think it's legit? 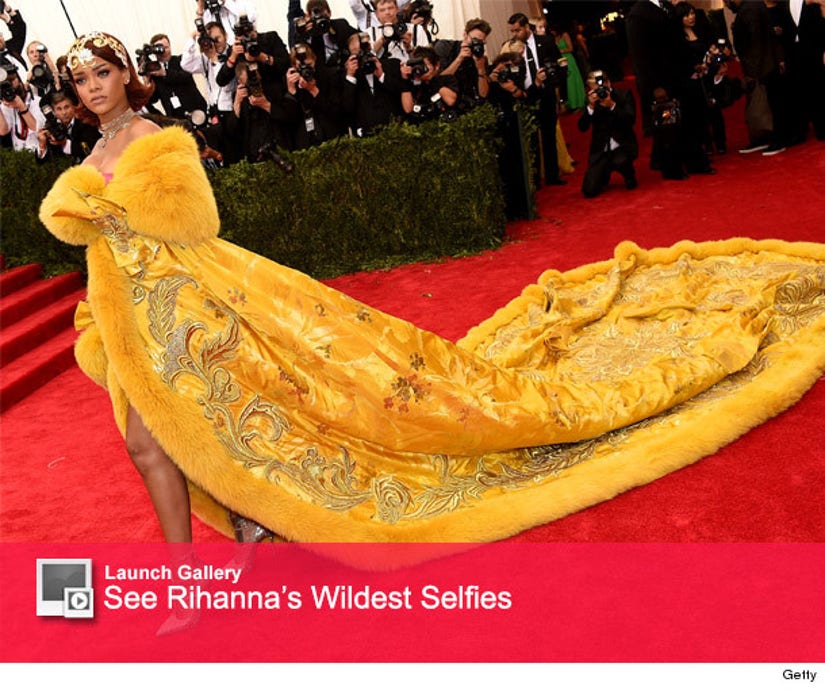 Rihanna made quite the entrance in this giant yellow number. The singer sported a look from Chinese designer Guo Pei, one of the designers actually featured in the Met Gala showcase.

While everybody will be talking about this look tomorrow, many on Twitter have already compared it to both pancake batter and an omelette in a frying pan. Who's hungry? 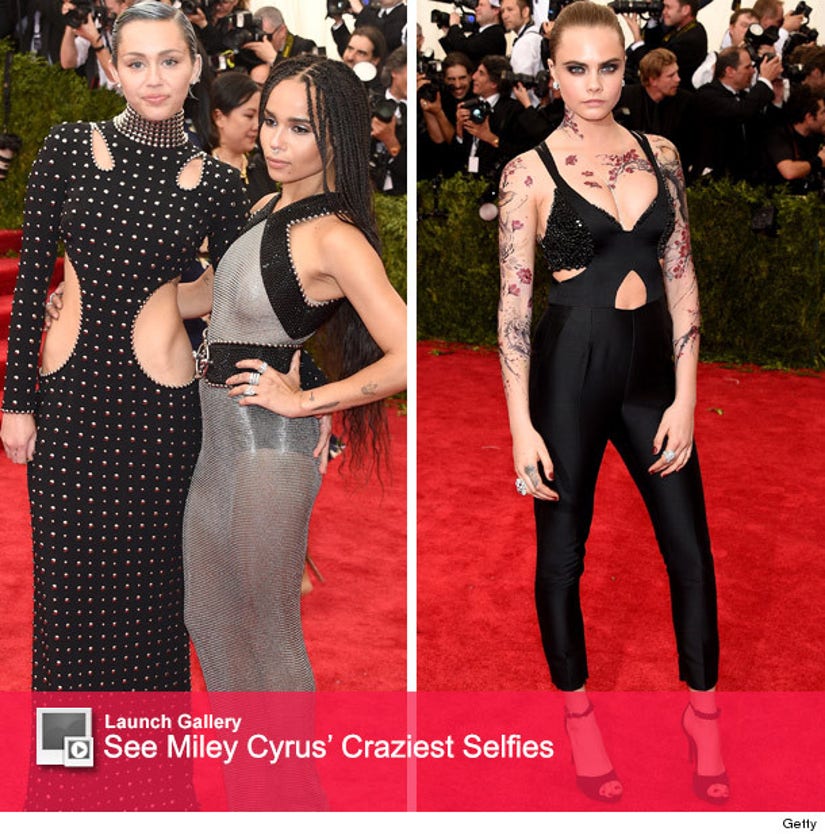 Miley Cyrus, Zoe Kravitz and Cara Delevingne all went punk/goth with their looks.

The three all wore black and silver. The "Wrecking Ball" singer stunned in a studded-dress with cutouts around her hips, while Lenny Kravitz's daughter also showed some skin in a see-through chain mail dress with studded embellishments.

While Delevingne's outfit was relatively demure, it was all those crazy floral tattoos that had us doing a double take! 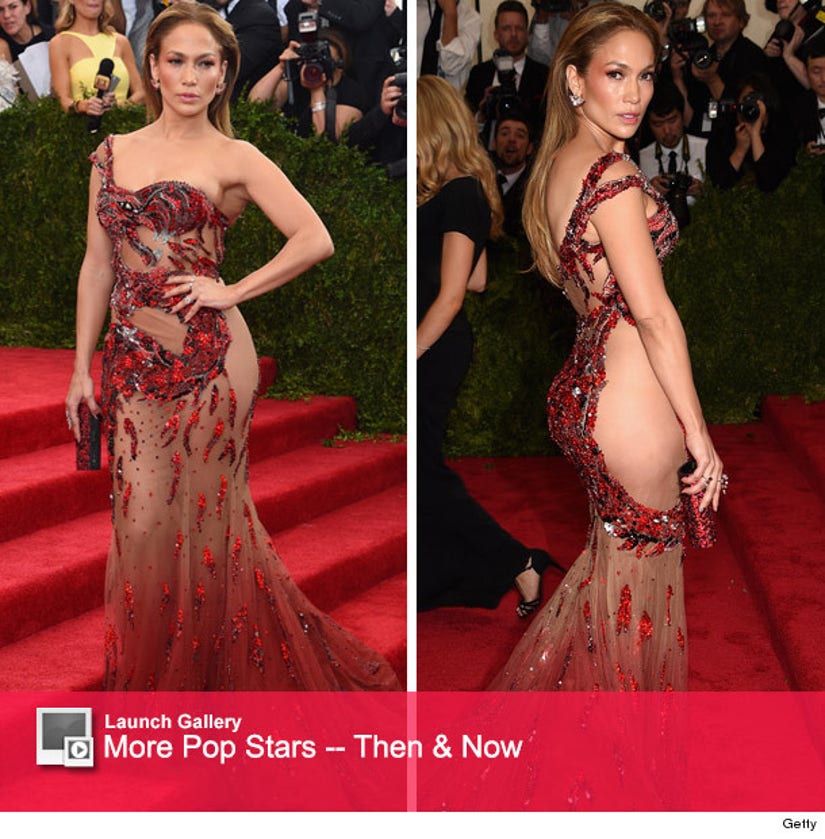 Not going the demure route: J.Lo.

Jennifer Lopez put her most famous assets on display in a sheer gown as well, rocking the hell out of a Versace number only she could pull off. 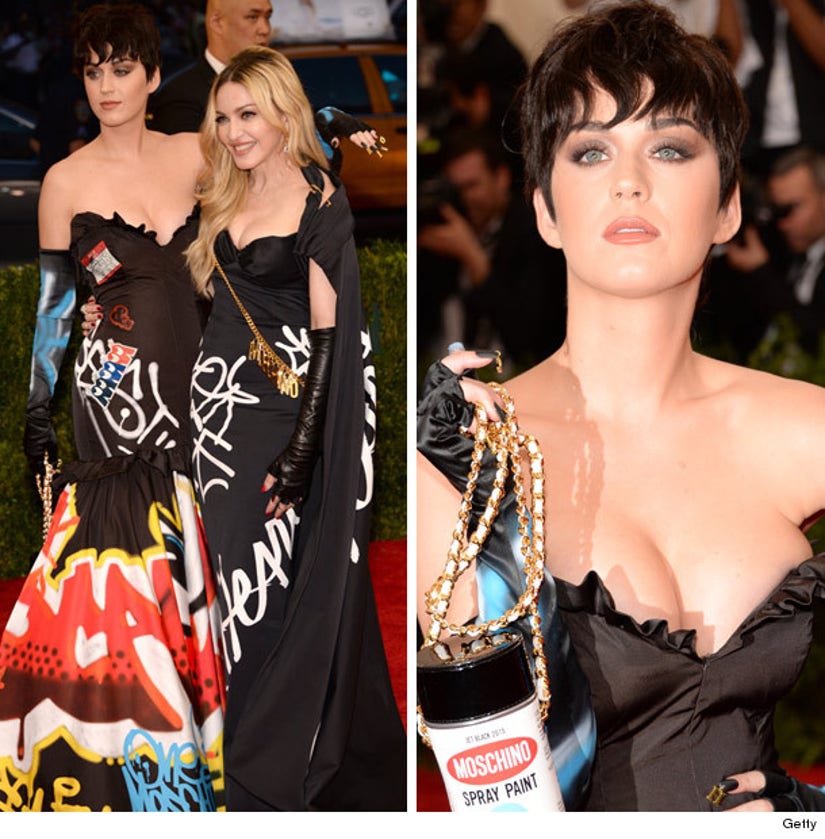 Madonna and Katy Perry matched in Jeremy Scott, the two wearing a pair of dresses that are sure to get them on some Worst Dressed lists tomorrow.

The graffiti-covered creations were adorned with the words "Rebel Heart," Madonna's most recent album.

Way to pimp out that new music! 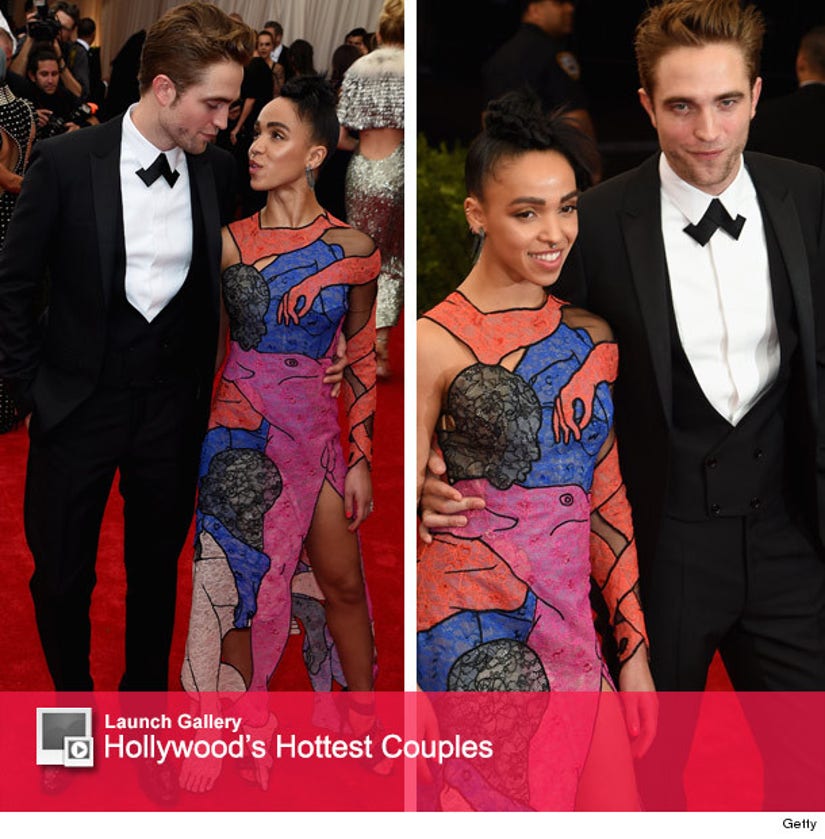 And rounding out our must-see celebs are the newly-engaged Robert Pattinson and FKA Twigs.

This might be the most handsome the former "Twilight" star has looked in a long time -- he's seriously dapper here!

Other standouts included Keri Russell in a feathered Altuzarra dress, Selena Gomez showing some cleavage in a revealing Vera Wang, Jessica Chastain's golden goddess gown and Solange Knowles in an indescribable mini. Seriously, you have to check it out in the gallery at the top!

Hard to believe it's been a full year since Beyonce's sister got into a fight with Jay Z in an elevator after the 2014 event. Hopefully everyone behaves themselves this time around!

To find out who was partying with who after the event, check out the gallery below: 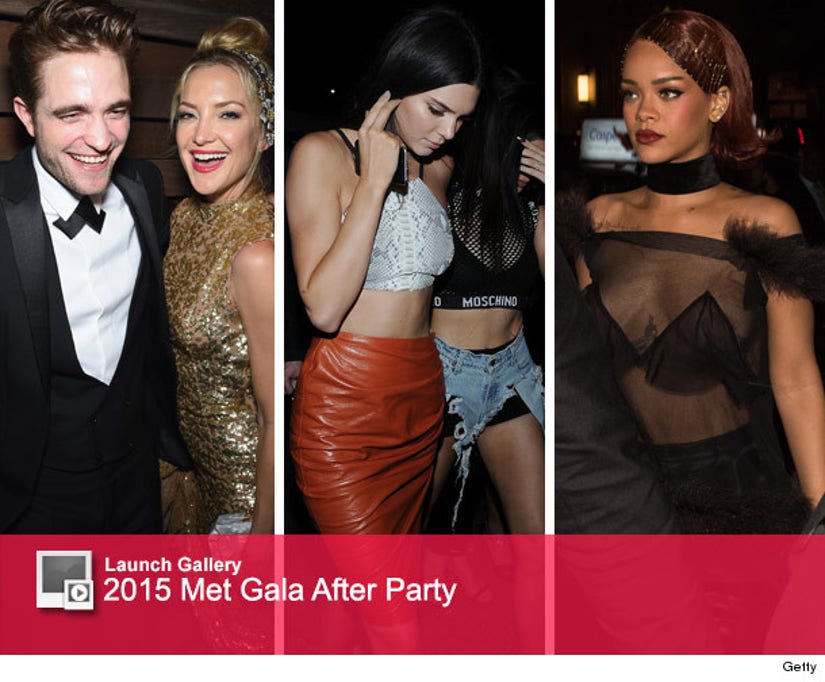 And be sure to check out all of our Met Gala coverage below:

2015 Met Gala: Check Out All the WILD After-Party Pics!
J.Lo, Kim, Kendall and Beyonce -- Who Wins Battle to Show Most Skin at Met Gala?!
Katie Holmes Chops Off Her Hair for 2015 Met Gala ... Or Did She?
Solange Knowles Returns to Met Gala After Last Year's Fight Fiasco
Amal Clooney Looks Ravishing in Red at Met Gala -- See Who Else Wore the Fiery Color
Blake, Beyonce & More -- See The Best (And Worst) Looks From Past Met Galas

And see some of the best and worst dressed stars of all time in the gallery below! 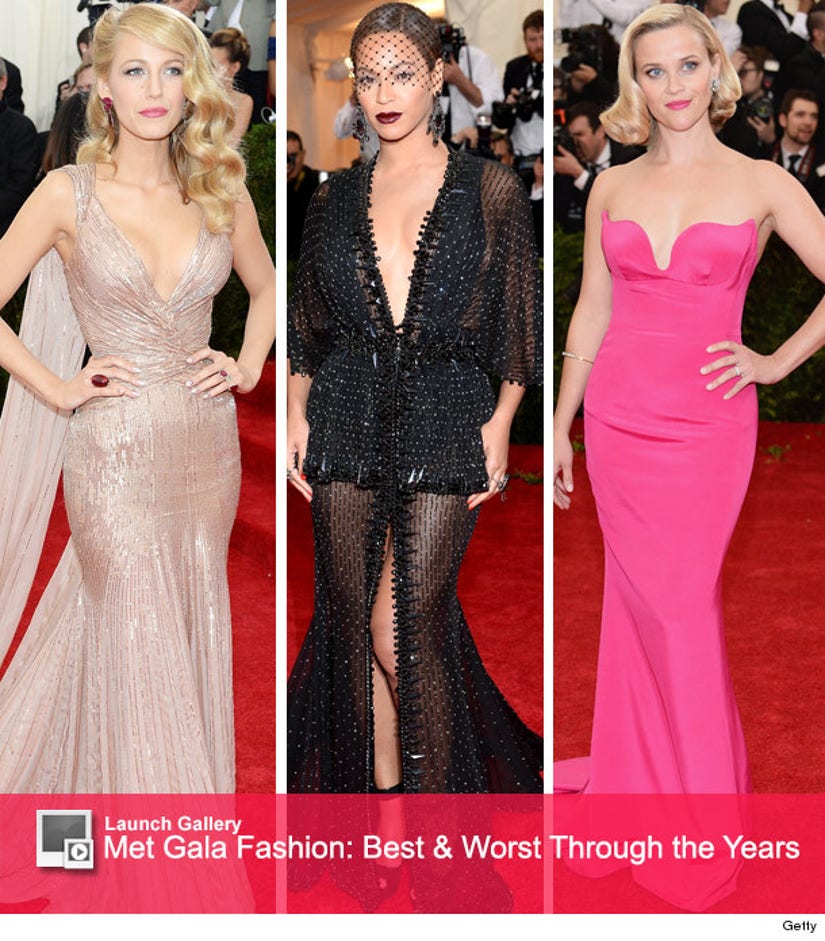