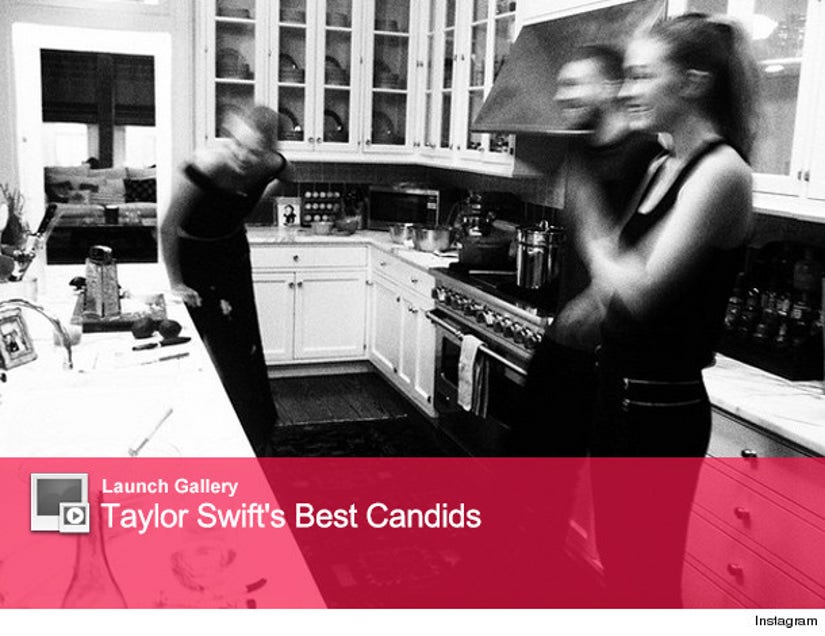 The "Blank Space" singer just snapped (and shared) the first photo of her "Feel So Close" DJ beau via Instagram on Monday.

Taylor took to Twitter to celebrate National Best Friends Day with the super cute photo. "I took a photo of my favorite people--they were laughing so hard, the lens couldn't capture it fast enough," the blonde beauty captioned the pic, which was also posted on her model pal Gigi Hadid's Instagram account.

In the candid snap, Calvin is pictured with the 20-year-old beauty as they are spotted cracking up in the kitchen together. It's blurry, but we know it's him.

Taylor and the 31-year-old DJ were first linked romantically back in March, and have been spotted on numerous dinner dates together since and even showed some major PDA at the 2015 Billbaord Music Awards in May.

Earlier this month, Swift's fellow pop star pal Ellie Goulding opened up about Taylor and Calvin's relationship while chatting with U.K. newspaper, "The Sun," and revealed that she set up the cute couple.

"I did play matchmaker, that's true," she told the publication. "Calvin is a really great mate and he's so fantastic, and Taylor is such a cool person who I love. I thought, 'They're both really awesome and both really tall, they'll be brilliant together.'"

We couldn't agree more with the "Lights" singer!

What do you think about the "Bad Blood" songstress' new photo? Sound off below and check out the gallery above to see more of Swift's best candids!