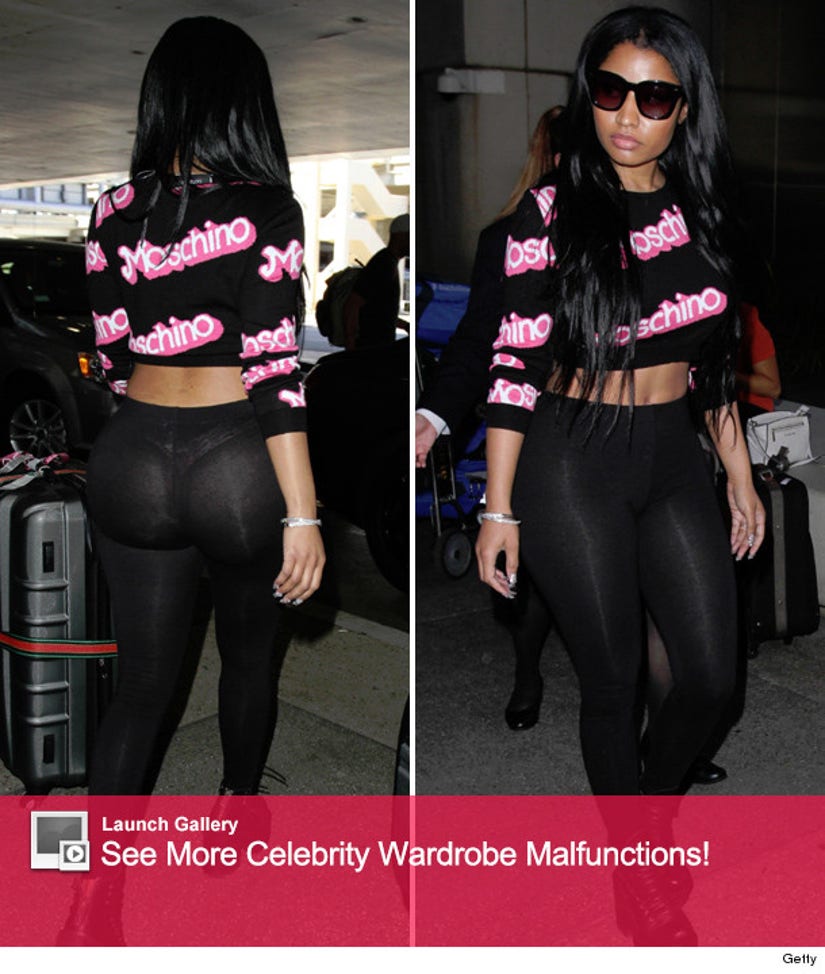 Nicki Minaj showed off a little more than she probably wanted while leaving LAX in Los Angeles on Monday.

The rapper looked comfy and casual as she made her way out of the airport rocking black leggings, a black and pink Moschino sweatshirt, platform combat boots and giant sunglasses.

But under the flash of the camera, the "Starships" singer's booty and matching black thong were accidentally exposed.

It's not like the rapper has a problem with showing some skin, though! The brunette beauty stunned on the July issue of Cosmopolitan magazine earlier this month in a sparkly bodysuit, where she also opened up about "demanding orgasims."

"I demand that I climax," the "Anaconda" singer told the mag. "I think women should demand that. I have a friend who's never had an orgasm in her life. In her life! That hurts my heart. It's cuckoo to me. We always have orgasm interventions where we, like, show her how to do stuff. We'll straddle each other, saying, 'You gotta get on him like that and do it like this.' She says she's a pleaser. I'm a pleaser, but it's 50/50."

The 32-year-old also opened opened up about her desire to start a family one day, too.

"Ten years from now, I will have two children, unless my husband wants three. I will be into my fitness a lot more, I will stop yo-yo dieting, and I'll be a housewife with careers that I can run from home," Minaj revealed. "I want to be able to cook for my children, bake cookies for them, and watch them grow up. I just want to be Mommy. Take them to school, go to the parent-teacher conference, help them with their homework, and put their work on the refrigerator."

What do you think about Nicki's latest revealing look? Sound off below and check out the gallery above to see even more celebrity wardrobe malfunctions!