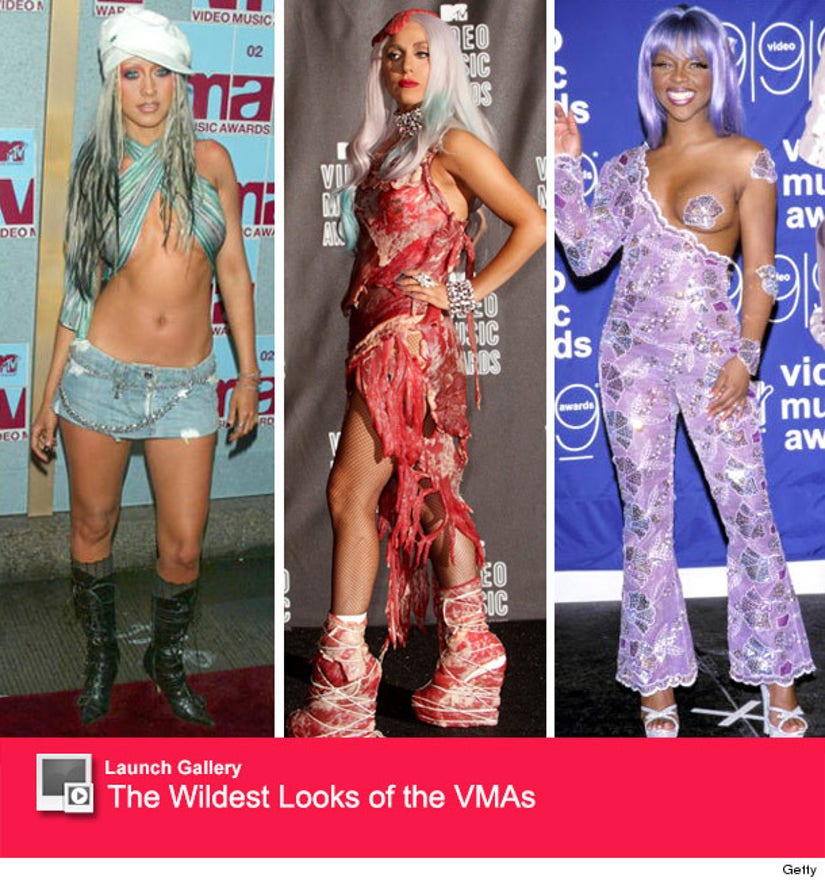 The 2015 MTV Video Music Awards air tonight, meaning we're in for some crazy celebrity fashion, wild antics and a ton of musical guests -- and we're taking a trip down memory lane with some of the wildest fashions from the show's vibrant history.

Back in 2002, Xtina was at the height of her "Dirrty" days and showed up to the red carpet revealing a whole lot of skin! The singer donned a micro mini skirt and flaunted some major underboob in a tiny criss-crossed halter top!

Always a risk-taker, Lady Gaga took one of her biggest fashion risks of all time at the 2010 show, where she donned a dress made entirely out of raw beef. The ensemble, designed by Franc Fernandez, understandably got Gaga in some hot water with animal rights groups.

And, who can forget Lil' Kim's infamous 1999 look, that left one of her breasts nearly exposed. The star attempted to cover up with a shell pastie and donned a wild purple wig to complete the look.

Some of our favorite stars have made very glamours transformations at the VMAs over the years.

In 2005, Beyonce was a far cry from the Queen Bey we know and love now. The "Drunk In Love" singer looked fresh out of the '70s in a shiny gold number and over the top hair. Flash-forward to 2014 and the star killed it in a Nicolas Jebran ﻿gown with tons of sheer panels!

And, Miley Cyrus went from innocent tween to twerking queen in just a matter of five years!

The star was adorable on the 2008 carpet with her long curls and Zac Posen frock. But in 2013, she introduced the world to the Miley we know now, with her tongue and twerk-filled performance of "We Cant Stop" with Robin Thicke. She stepped out on the red carpet in a vintage Dolce & Gabbana number and accessorized with her famous facial expression.

We can't wait to see what the "Wrecking Ball" singer has in store for us when she hosts this year's show!

Which wild look is your all time favorite? Sound off below then click "Launch Gallery" to relive all the fashion from shows past!