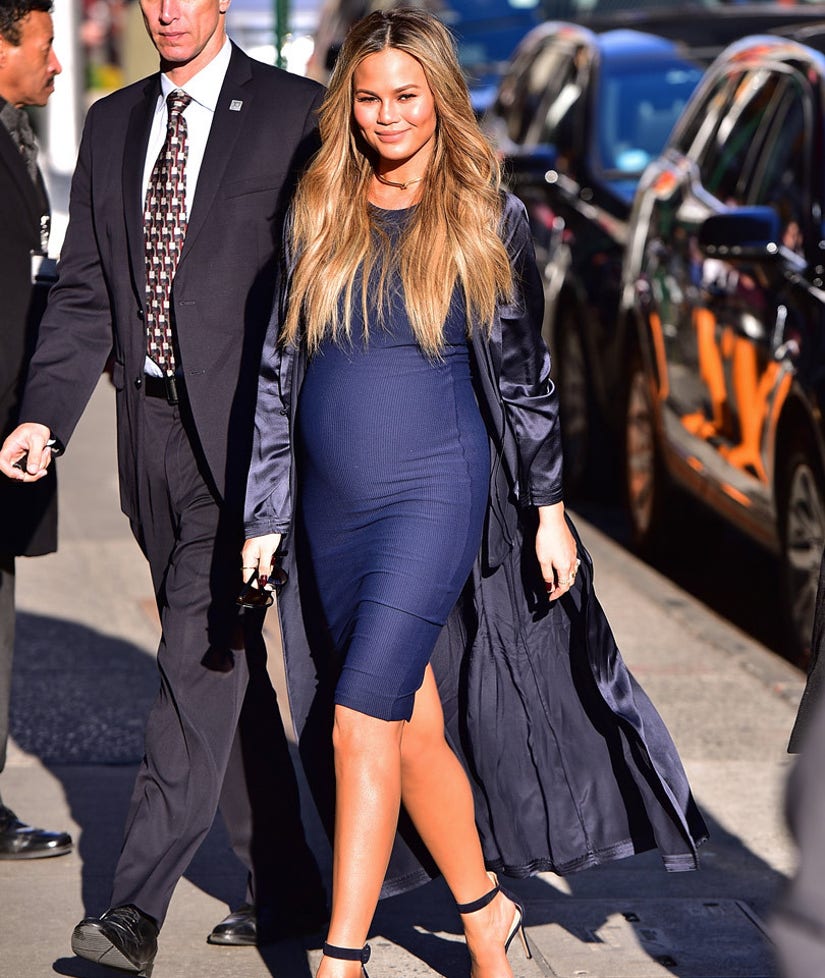 Chrissy Teigen has perfected the art of dressing her baby bump!

The "Cravings" author put her growing belly on full display in New York City on Tuesday, showing off her curves in a blue, long-sleeved body-con dress. She completed her picture-perfect look with black strappy sandals, a silk duster coat and tousled waves.

The Sports Illustrated stunner, who looked gorgeous on the red carpet at the Oscars on Sunday, made headlines for her cringe-worthy reaction to Stacey Dash's unexpected on-stage cameo. In true Chrissy form, she laughed off all the memes.

"Our whole area was still talking about it well into the Sarah Silverman segment because we were just so floored by the silence, and it was so funny to see Chris [Rock] and Kevin [Hart] both look at each other like, 'Oh man, that was weird.' It was so funny to us," she told Robin Roberts on "Good Morning America." "I gotta show my face, I can't hold it in. My phone was going insane. I was like, 'What have I done now?' Because you can't tell when the cameras are on. There's no red light here. You have no idea. I love seeing my Instagrams right now though because people are turning it into all sorts of different memes. I love it."

In case you missed, check out the awkward moment below!

Mrs. John Legend also created buzz for admitting that she chose the gender of baby during IVF.

"I didn't realize that this is so not really talked about," she explained. "In my world it is, because everyone I know has gone through this. So I said it so casually that I didn't anticipate all the people who had never heard of such a thing before. It's interesting to spark conversation and get people talking about it, and we're happy with our decision and we're proud of it and we're glad that we're living in a time where we could do such a thing. But it's weird, we definitely didn't anticipate any kind of backlash from it."

Chrissy also revealed why the couple chose to have a baby girl, explaining that her husband "deserves" a daughter. "He's so good to be me obviously and he's just going to be the most doting, amazing father to a baby girl. A baby boy too, but we all know boys love their mommy, so I'll give him this time first and then next time it'll be mine."

We can't wait to see their new addition, can you?!