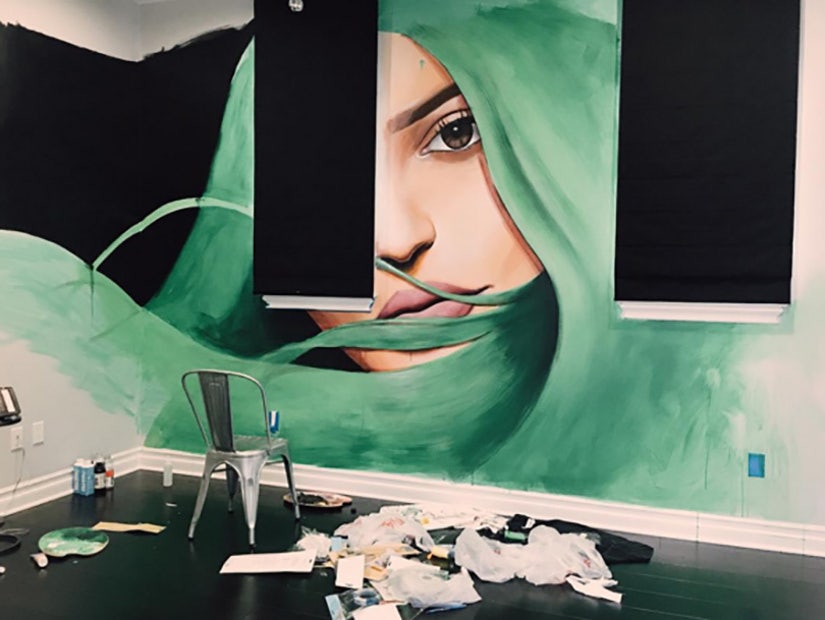 Now we know a little more about that unique mural inside Kylie Jenner's home.

The reality TV star made headlines earlier this year after posting photos and video of a mural being painted inside her mansion. But this wasn't any regular wall decor. No, the face covering the wall belonged to someone very familiar: Kylie herself!

Fans and foes alike started commenting about the seemingly-vain decision to get a mural of her own face plastered on the plaster -- and now, the man responsible for the artwork is speaking out.

Joshua Woods, an L.A. based tattoo artist and brother to Kylie's BFF Jordyn Woods, agreed to do the piece as a favor. And, according to him, making it a portrait was all his idea, not Kylie's.

"I just happened to be a friend that painted and she gave me the opportunity," he tells toofab of his work, which shows Jenner sporting vibrant green hair and her signature plump lips.

"She wanted a goddess/mother nature theme mural for that space," he elaborates. "I actually decided to do the mural with her as the subject. I'm about self empowerment and what better way to do that with a badass mural of yourself?"

He says that the 18-year-old fashionista hasn't said a word about the online reaction to the piece.

"It's always been full of positive vibes and she has been really cool to work with," he continues. "We both respect each other's vision and she just lets me do my thing."

While it's nearly finished, Joshua will certainly have some fun stories to tell when he's all done.

So, what's been the craziest moment about working inside the Jenner abode?

"Doing a random makeup video while I was waiting for paint to dry," he reveals. Back in February, Kylie had both Josh and buddy Harry Hudson try to do a tutorial on her app.

"I don't know a single thing about make up!" he tells us ... though, in the sneak peek above, she seems impressed!

What do you think about the mural? Sound off below!