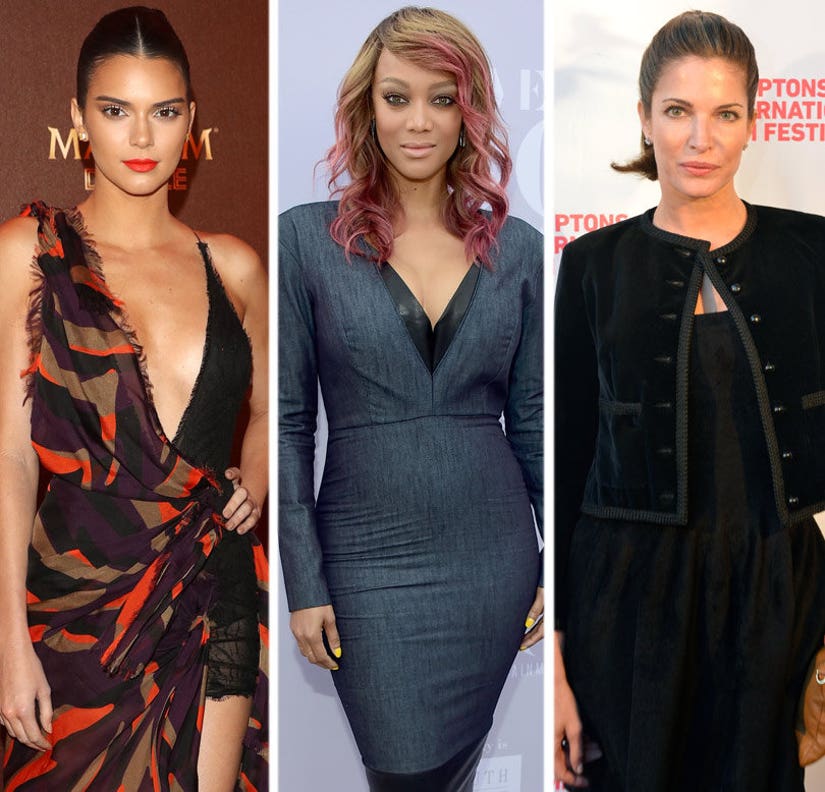 Tyra Banks is taking a stand against the "model war" that has erupted between Kendall Jenner and Stephanie Seymour.

In case you missed it, Seymour was recently asked by Vanity Fair about how the industry has evolved in recent years. "Supermodels are sort of the thing of the past. They deserve their own title," she told the publication. "[Kendall and Gigi Hadid] are beautiful girls, and I support all of them, but they need their own title."

As for what their title should be, she said, "Bitches of the moment! That would be a good title for them."

This response did not settle well with Kendall, who spoke out against Seymour. "Gigi sent me the most recent rant and I'm disappointed," she wrote on her website. "If you're going to tell us not to be in ''your moment,' then don't be in mine! This moment is all about being supportive—NOT cyberbullying. But, if you choose to be a cyberbully, I'm going to stick up for myself."

"No one is trying to steal Stephanie Seymour's thing, or trying to be her," she added. "I actually looked up to her. She has a daughter! I guarantee you that she didn't imagine someone so publicly shaming her daughter when she made those comments about us being 'bitches of the moment.'"

Now that you have the background, here is what Tyra had to say about all the drama:

MODEL WARI LIVE IN THE MIDDLE OF A CERTAIN WAR THAT IS RAGING RIGHT NOW. A MODEL WAR.

Why do I feel in the middle? I'm a model that started my career in high fashion, that transitioned to the girl-next-door sexy Supermodel, and then created a modeling reality show that catapulted my career and personal brand further than I could have ever imagined. I'm not 100% couture, nor am I 100% TV star. So, yes, I exist in the middle. A sort of hybrid. There's a level of poetic first-hand experience and understanding that I have and want to share about this escalating battle between Supermodels of the past and present.

First, I want to speak to the original Supermodels… my sisters… my girls…

We worked runways and shot magazine spreads together, schlepped to countless go-sees, used pay phones for on-the-go communication, and subways for transportation around the globe – no cell phones, Ubers or Lyfts around. Our GPS were huge, awkward maps in Italian and French that we pulled out when lost and scared. We started out by booking low-end work for janky magazines that no longer exist and walked in way too many showroom fashion shows at the local mall. And, after all that hard work, dedication, sacrifice, sidewalk pounding, map folding, metro riding, model apartment living… after all the blood, sweat, fears and floods of tears… we finally were bestowed with the coveted title of Supermodel!

Fast forward to present day, and some of us are in a state of shock. We witness young girls on reality shows and super popular girls on social media now being called Supermodels and think, "WHAT?! It's not fair! Is that kind of success even real?" I've gotta be blunt.

There is insanely high demand for these girls from the public, and yes, from the intimidating, elusive fashion industry too. I know you're thinking, "But HOW can the industry justify them? They didn't sweat and SUFFER like I did!!!"

But, I beg to differ.

The "Top Model" star goes on to say this new generation are running around just as much, under the glaring light of Twitter, Facebook, Snapchat, Vine, Periscope, Facebook Live, pinterest ... all day, every day. "I see you," she tells them, "You're kicking ass, working hard."

"You're on countless covers, rule all the campaigns, walk everyone's runway, have top designers on speed dial and everyone knows your name," she continues, before saying it's "obvious" whether they're "Supermodels" or not.

She concludes her rant by saying all models should stick together. "Yesterday's 'Trinity' is today's #Squad. And what we all must remember is that we are stronger together than apart. I hope we can start to act like it."