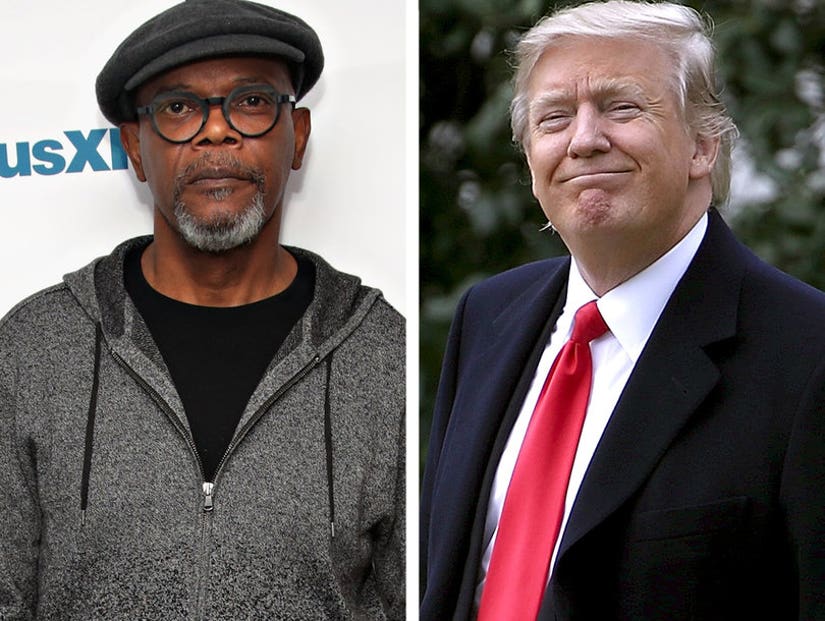 Samuel L. Jackson made a bold claim about the Trump administration this week.

Minutes before criticizing "Get Out" for casting a black British actor to play the role of an African American, the Oscar winner told New York radio station Hot 97 what he thinks Donald Trump's campaign slogan "Make America Great" really means: systematic oppression of people of color.

"I'm not shocked by the new administration or how dude ran his campaign. When I hear 'Make America Great Again,' I just kind of smile. I know what that means," Jackson said. "Because I was there when they thought America was great — or when it was great for them. Once they get all the Muslims out of the country and move the brown people back out of the country where they want them, the next thing they're going to want is to see us bent over in the cotton fields singing spirituals."

The comment came after the 68-year-old "Kong: Skull Island" star talked about growing up in the racially segregated south.

“I grew up in Tennessee in segregation, so from the time I was born until I left Tennessee, I had another idea of what America was,” he said. “I grew up in an America where there were places I couldn't go or things I couldn't do. I saw the 'whites only' signs on water fountains.”

Jackson urged American citizens concerned about Trump's agenda to "continue to resist" and pointed out a more sinister reason why the country should be opposed to another major war.

"Worry about them starting a war, because the only way they can clean out Chicago, Detroit, Watts and all these other places is to reinstate the draft and put all these young brothers on the front line and hope they get killed and don't come back home," Jackson said. "And then they can have another part of 'making America great,' because then they start decimating the population to make sure we're not procreating."

"There's a lot of stuff people need to wake up to and think about and look around and see that they need to resist and fight," he added. "Now, even if we get rid of dude, the dudes behind him are just as bad or worse because they're actually kinda smart ... He's reactionary and kind of twisted mentally, but these guys are calculating, those are the guys we gotta worry about."

Watch the entire interview below. Jackson begins talking about his experience growing up in a segregated America at the 20-minute mark.