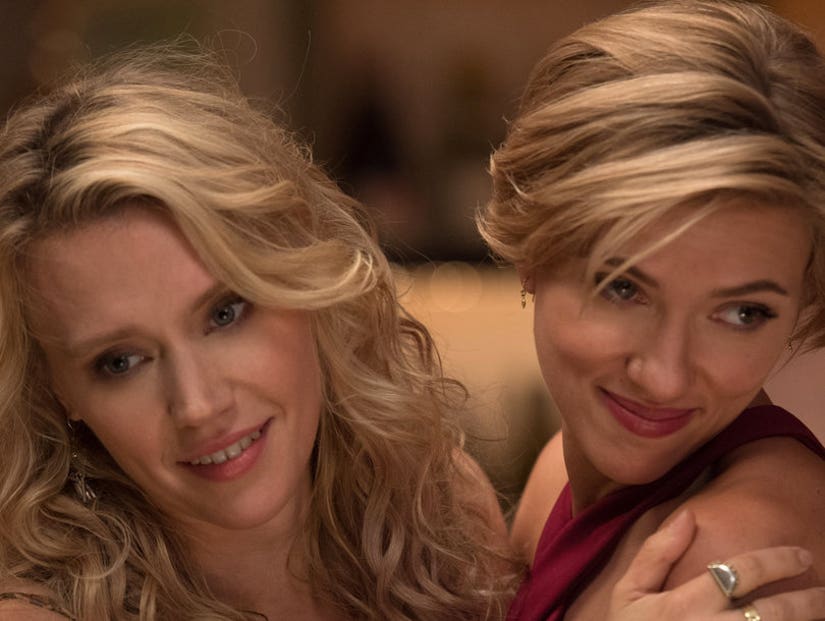 “Rough Night” is exactly the kind of movie you'd expect to fly by, propelled by the manic and dependably hilarious antics of big-hearted outcasts played by the likes of Rebel Wilson or Melissa McCarthy. But neither of those talented actresses, who played those kind of roles in “Pitch Perfect” and “Bridesmaids,” are in this new ladies' weekend comedy, and there's no one even trying to emulate their whirlwind energy and set piece expertise. And so “Rough Night,” even at just an hour and 40 minutes, feels a little bit long and formulaic, even if it executes the formula with precision.

There is plenty enough to enjoy in the movie, which stars Scarlett Johansson as Jess, a former wild child now domesticated, on the brink of marriage and election to public office. For her bachelorette weekend, she reunites in Miami with her best friends from college: Alice, played by Jillian Bell, is the sort of bossy and desperate one planning the whole weekend, while Blair (Zoe Kravitz) is the well-to-do success story, and Frankie (Ilana Glazer) is the radical protester. They're joined by the friend Jess met during a semester in Australia named Pippa, who is played by Kate McKinnon. 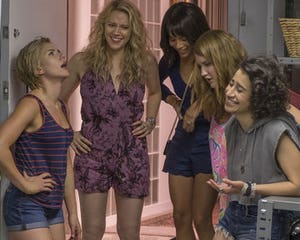 The ladies have a weekend filled with debauchery planned, but all that soon goes to hell when a stripper they order for Jess slips in their gigantic rented house and cracks his head, dying in a pool of his own blood. Most of the movie is centered on their desperate attempt to get rid of the body, which had the potential to create a whole lot of big, ridiculous situations across Miami, like a darker “Weekend at Bernie's” update. But instead, most of the action is contained to the beachfront mansion, with the women making futile attempts to drive the body into the ocean and other silly half-assed efforts to dump a corpse.

Pippa is the closest “Rough Night” comes to approximating the energetic, loving weirdo dynamic, and McKinnon's performance is one of the movie's highlights. She's got some strange habits, all chalked up to the fact that she's Australian, and darts her expressive eyes all over the place, suggesting a deeper strangeness that we never really hear about.

The movie was co-written by Lucia Aniello and Paul W. Downs, who cut their teeth writing for “Broad City,” which naturally has a smaller scope and budget than a major studio movie. Aniello also directed the movie, and you can really tell that she's got a background in TV. The conversations — while funny — are often long, there's a lot of talking about what they're going to do instead of actually doing it, and the follow through generally takes place in a confined space. Not to say that they needed to romp around the city, “Hangover”-style, but some more action would have helped. 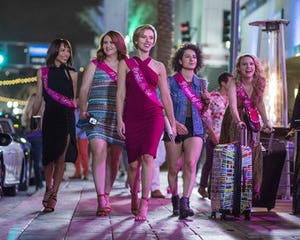 Ironically, it's Downs, who plays Peter, Jess's fiance, that gets the most ambitious plot. When Jess calls him and accidentally suggests she's getting cold feet, and then accidentally has her phone destroyed, Peter decides to drive all night from Virginia to Miami to win her back. He goes the full “sad astronaut,” a reference to the former astronaut Lisa Nowack who drove cross-country in an adult diaper to seek revenge on an ex; Peter doesn't want to murder anyone, but he does piss in his seat to save time.

The best part of “Rough Night” is that, while it's not zippy or uproariously funny, it's told from a woman's point of view. Finally, this sort of raunchy comedy is told through a different lens; we can get a glimpse of what older millennial women are concerned about and how they envision their future, and both the inevitable self-indulgence and despair feel authentic, not like they were cooked up by a male screenwriter who was just guessing.