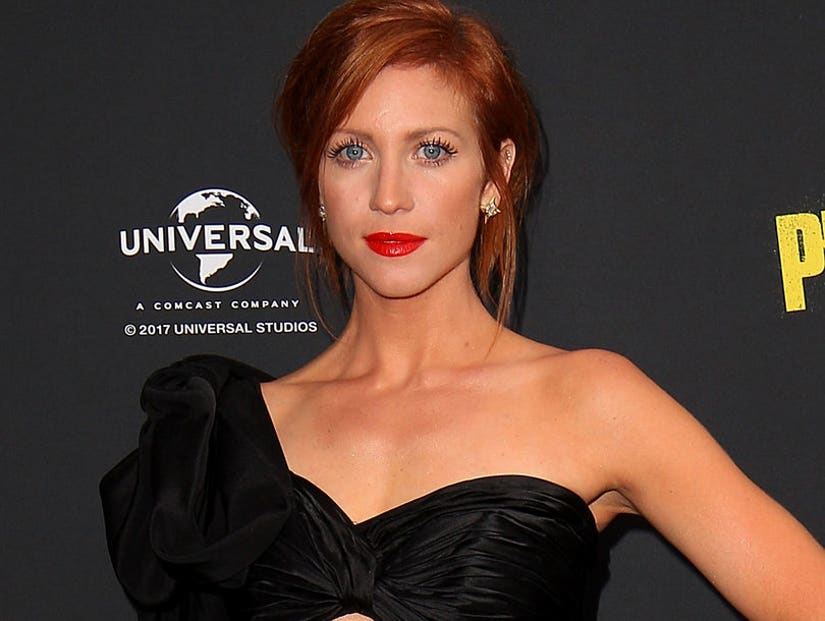 You've heard plenty of Brittany Snow's singing voice in the "Pitch Perfect" movies, but never quite like this.

The actress stopped by the "Allegedly with Theo Vonn & Matthew Cole Weiss" podcast this week to share her incredibly impressive Britney Spears impersonation, chat about the importance of the #MeToo social media campaign and spilled some secrets about Rebel Wilson's wild behavior on set of the latest film.

Snow revealed Britney Spears' "Toxic" was added to the third film after producers heard about her hidden talent.

"I sing the lead very much in a Britney Spears-esque sounding tone," Snow said, explaining how she recorded many different versions of the song, ranging from her regular voice to the "most Britney Spears" sound she could muster.

Snow volunteered to sing a verse during the podcast -- and it's everything. Hear it around the 9:10 mark below:

Why She Joined the #MeToo Movement

As allegations of sexual harassment and assault continue to flood Hollywood, Snow said that she too has experiences harassment on the job.

"Not to the degree where I could come out publicly and say anything against anyone who specifically has done that," Snow said. "But there have been instances, of course, and I would be shocked if any actress in this business hasn't had something happen that stifles their thinking or their confidence. And I think a lot of that comes off as maybe a fleeting thing that is overlooked, but it is harassment for someone to diminish you because they feel they have more power and it just, a lot of times, is men.

"And I think that's why I came out and said a 'Me too' too because there's been many times that that's happened. But my heart goes out to and I have so much respect for the women who have come out with their stories of being sexually harassed," she continued. "I think it's a great thing that people are feeling so honest and truthful right now because there's a stigma around being honest sometimes. You get seen as maybe you're doing it for attention or feeling like its a vanity thing."

"What we can do now is that we are all having a conversation about it and I think that's what is the great thing about this movement, that people are starting to really consider and think about their actions in this regard on both sides, and I think that for men especially," she added.

Snow said the best prank pulled on set during filming of the third movie was courtesy, surprise surprise, the hilarious Rebel Wilson. Snow said Wilson pretended to fall down the steps of her trailer and injure herself, complete with fake blood, on April Fool's Day.

"She held up production for a little bit," Snow explained. "It was elaborate and quite scary. I guess that's not really a funny 'haha' prank, but I liked the commitment."

The actress explained that the likelihood of a fourth "Pitch Perfect" movie really depends on how well the new installment performs in theaters.

If a "Pitch Perfect 4" does get the green light, Snow said she'd love for one of the characters to get married and have some "Hangover" hijinks go down in Las Vegas.

"Somebody has to sing their way out of a cabaret show, we're in Vegas, we get in trouble and mischief ensues," she joked.

When asked the most annoying character Snow has ever had to play, she sighed and said, "There's been so many. I'm not joking."

"You know it's funny... people love me being the damsel in distress and also not knowing whats going on or being a little bit flighty," she added. "Because of those types of roles, I really work hard to make my character have a little bit more of a point-of-view, and an arc, and a strength to them. But I can only do what the script and what the producers and the directors allow me to do, and what it cuts together. And then I see it and I say, 'Oh wow, she is so annoying. I would never want to hang out with who that is!'"

About her first big movie "Prom Night," she added, "I mean it was a cool movie, but I dont know if it was necessarily a good movie."