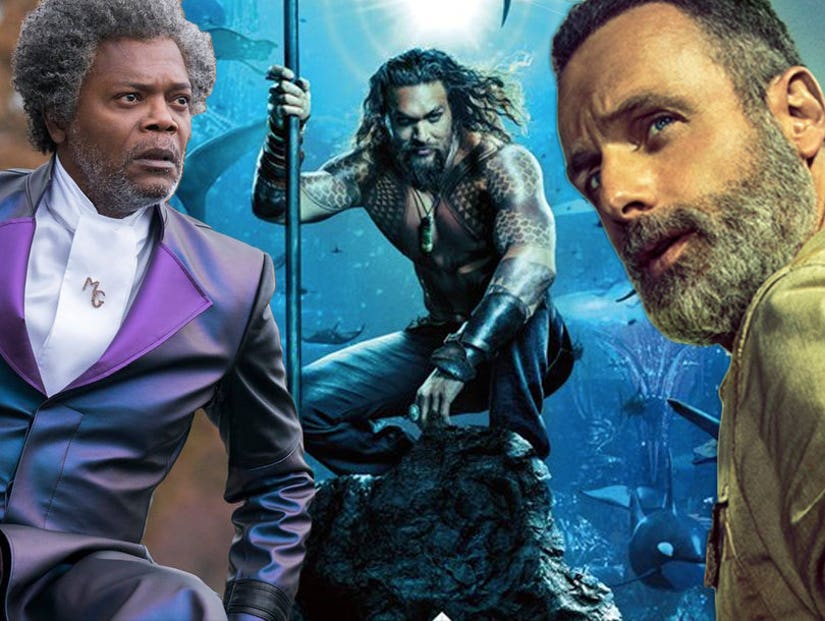 Comic-Con is officially underway in San Diego and the goodies are already dropping online from your most anticipated film releases, favorite returning TV shows and a few new ones, too.

After the events of "Infinity War" left Marvel holding its cards close to its chest for what's to come from their future slate, the company sat this year's celebration out, leaving room for other releases to dominate this weekend's headlines.

The first trailers for "Aquaman" and "Glass" will drop on Friday, while fresh looks at movies like "Wonder Woman 84," "Shazam!" "Godzilla: King of the Monsters," "Fantastic Beasts: The Crimes of Grindelwald," "Halloween," "Venom," "Transformers" spinoff "Bumblebee," and "Spider-Man: Into the Spider-Verse" all expected as well.

On the TV side, "The Walking Dead" will debut a trailer for Season 9, "Fear the Walking Dead" will tease the back half of Season 4, Arrowverse shows including "Arrow," "The Flash," DC's Legends of Tomorrow" should drop sneak peeks, while "Riverdale" is also expected to give a glimpse at Season 3.

We'll update this post as trailers, sneak peaks and even sneak peaks at trailer's are dropped. Keep checking back! 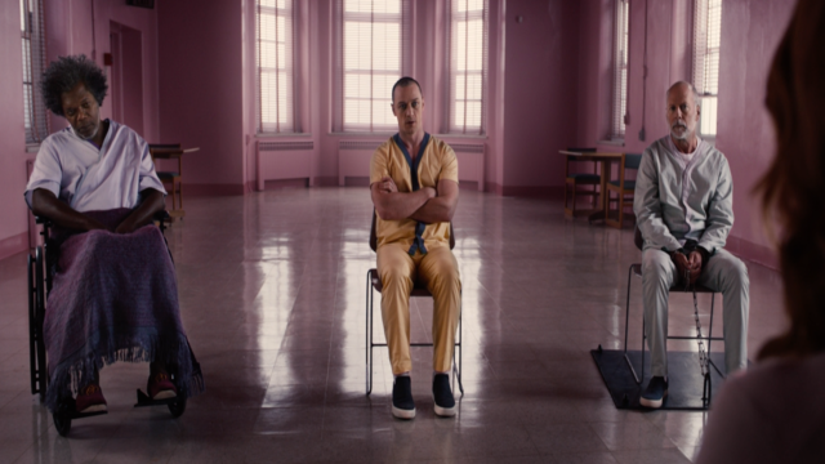 The M. Night Shyamalan universe is HERE, as the characters from "Unbreakable" and "Split" cross paths in the new film, "Glass."

"From Unbreakable, Bruce Willis returns as David Dunn as does Samuel L. Jackson as Elijah Price, known also by his pseudonym Mr. Glass," explained Universal. "Joining from Split are James McAvoy, reprising his role as Kevin Wendell Crumb and the multiple identities who reside within, and Anya Taylor-Joy as Casey Cooke, the only captive to survive an encounter with The Beast."

"Following the conclusion of Split, Glass finds Dunn pursuing Crumb's superhuman figure of The Beast in a series of escalating encounters, while the shadowy presence of Price emerges as an orchestrator who holds secrets critical to both men."

Sarah Paulson also stars in the film as a psychiatrist, who, in the trailer, attempts to talk all three of them out of believing they have super powers.

The full trailer for the ninth season of "The Walking Dead" premiered during its Hall H panel on Friday and it's insane!

With both Andrew Lincoln (Rick) and Lauren Cohan (Maggie) leaving at some point during the season, as their characters go head to head over how to lead in the zombie apocalypse, the show will really shake things up when it returns in the fall.

It begins with a shot of Rick sitting down for a chat with Negan in his cell. "It wasn't that long ago, we were fighting just to stay alive, but its not like that anymore," Rick tells him. "We're building, we're growing."

All the communities are seen working together, but it's not all peachy keen. There are still power struggles in place, as nobody can really agree on whether the Saviors are redeemable. Expect face offs between Rick, Daryl and Maggie.

There's also much talk about putting new rules in place. "Like this is how we treat each other and this is what happens when you don't," says Michonne. Other shots included Carol and Daryl getting a little snuggly and that damn helicopter again.

A whole new group is also introduced at the very end, including Yumiko and who appears to be Magna, who comes straight out of the comics. The trailer ended with some whispering zombies, meaning the Whisperers from the source material are also on their way. Robert Kirkman confirmed that Samantha Morton would be playing the role of Alpha, the next Big Bad.

Also, Maggie is seen holding a baby, so she finally gives birth.

The trailer was all kinds of exciting, showing that a damn Zombie-nado is on its way, as the survivors not only have to survive against the threat of walkers, but nasty weather that literally sends the undead flying through the air.

The group seems fractured, as the storm seems to drive a wedge through them and have an affect on their walkies. There are also a few new faces, including Aaron Stanford and Mo Collins. According to Goldberg, they'll bring "humor," "hope" and some will, of course, also "take away that hope." The show will also introduce its first cast member in a wheelchair when it returns.

While they didn't get specific about upcoming adversaries, the showrunners also teased that you do see a peek at this person or people in the trailer and they "have insights into [the main group] they don't even know yet." Goldberg said another state will also "be explored" near the end of the season.

The second half of the season premiere airs on August 12.

The "Star Trek" crew will be back on CBS All Access for a Season 2, kicking off in early 2019. During the show's panel, they also announced there would be a series of mini-episodes released in the fall.

The trailer shows us the debut of Anson Mount's Captain Pike, Captain of the Enterprise who takes control of the Discovery. Once there, he and the rest of the crew investigate a series of red bursts across the galaxy, linked to Spock.

The production value on the second season looks insane, which also seems to amp up the action and comedy.

"Heidi Bergman (Roberts) is a caseworker at the Homecoming Transitional Support Center, a Geist Group facility helping soldiers transition back to civilian life. Walter Cruz (Stephan James) is one of these soldiers, eager to begin the next phase of his life," reads a release. "Overseeing Heidi and the facility is Colin Belfast (Bobby Cannavale), an ambitious company man whose manic demands point to questionable motives."

After she leaves the support center, years later she's forced to reexamine her past. It debuts Friday, November 2.

Danny Rand and his Iron Fist are back in action in the date announcement trailer for Season 2 of the Netflix series. While the video only gives us a glimpse of his title move, the streaming service also released some details about the plot.

Season 2 furthers the transformation of Danny​, a character with a fish out of water coming of age story making his way in a harsh new world, battling to work out who he is. This season, Dann​y​ has promised that with Matt Murdock gone, he will step up and protect his city. ​But a sinister plot twist threatens his very identity ​and he must conquers his villains to protect the town and people he holds close to his heart.

As the AMC show enters its fourth season, the timelines of "Better Call Saul" and the series it was spun from, "Breaking Bad," will start "bending" more than ever before.

The familiar faces from the OG show will only grow ... and we think it's only a matter of time until we see Bryan Cranston or Aaron Paul show up. Could this be the season where it happens?

The show returns on Monday, August 6.

Godzilla: King of the Monsters

While only a teaser, a trailer for the next "Godzilla" film will drop during Warner Bros. panel on Friday. The clip shows star Millie Bobby Brown attempting to reach Monarch, the agency tasked with tracking "massive unidentified terrestrial organisms." Judging by the noises on the other end, things don't sound too good for the organization.

This time around, more creatures will be thrown into the mix, as three-headed dragon King Ghidorah, Rodan and Mothra will all battle the title bad guy. The movie also stars Vera Farmiga and Kyle Chandler and will hit theaters May 31, 2019.

BBC AMERICA dropped the first teaser footage for the brand new season of "Doctor Who," featuring Jodie Whittaker taking over the title role as the first female doctor.

The show premieres this fall.

Though "Titans" doesn't have a panel itself, the DC Universe streaming service is going all out with "half a dozen immersive, interactive experiences" in the Gaslamp Quarter to promote its upcoming shows.

Clearly taking place during the early days of the Titans team, Dick Grayson appears as Robin (before he took on the Nightwing mantle) in the series, but this isn't the pun-making Robin of the 1960s series. When asked where's Batman, Robin had a very clear answer: "F--k Batman." Starfire, Beast Boy, Raven and even Hawk & Dove make appearances in the trailer.

In addition to "Titans" and "Doom Patrol," DC Universe will be the exclusive home of the live-action "Swamp Thing" series, as well as an animated series for "Harley Quinn" and the continuation of the popular "Young Justice" series.

The "Sons of Anarchy" saga continues with FX's new series, "Mayans," which also dropped its very trailer online before its panel on Sunday at Comic-Con.

"Set in a post-Jax Teller world, Ezekiel “EZ” Reyes (JD Pardo) is fresh out of prison and a prospect in the Mayans M.C. charter on the Cali/Mexi border," reads the network press release. "Now, EZ must carve out his new identity in a town where he was once the golden boy with the American Dream in his grasp."

"Star Wars" fans got a big surprise at a panel celebrating the 10th anniversary of "The Clone Wars" TV series, as it was announced the show -- which was canceled in 2013 -- would return for 12 new episodes.

The show will air on Disney's upcoming direct-to-consumer streaming service, which is set to launch in 2019.