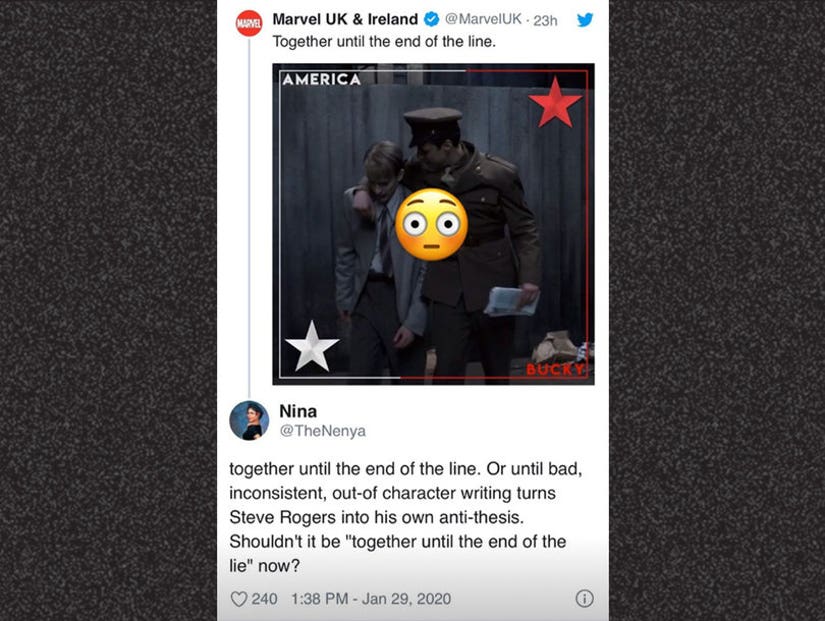 Not everybody was satisfied with how Captain America's arc concluded in "Avengers: Endgame"... including, it seems, the Winter Soldier.

Sebastian Stan appeared to throw some low-key shade at his employers Marvel on Thursday when he re-shared a post critical of the Russo Brothers' superhero finale.

The Twitter account Marvel UK & Ireland shared a montage celebrating the bond between Chris Evans' Captain America and Stan's Bucky Barnes, with the caption: "Together until the end of the line."

But a follower called @TheNenya appeared to take issue with how the writers had ended their friendship: with Steve Rogers abandoning his team, his duty and his best friend to remain in the past with the love of his life Peggy Carter.

Her post was liked 1.3k times, and caught the attention of Stan himself, who posted a grab of it to his Instagram Stories, with a flushed face emoji added.

While "Avengers: Endgame" came in for near universal praise, as well as $2.8billion at the box office, some fans weren't happy with the apparent U-turn in conscience that saw Rogers choosing his own happiness over helping others, which had been his raison d'être up to that point.

Following Stan's post on Thursday, his name quickly trended on Twitter, with 19k people wading into the conversation.

Boyega famously criticized the storytelling in "Star Wars: The Last Jedi" — the other mega franchise acquired by Disney — admitting he wasn't happy when plot lines in "The Force Awakens" were apparently abandoned.