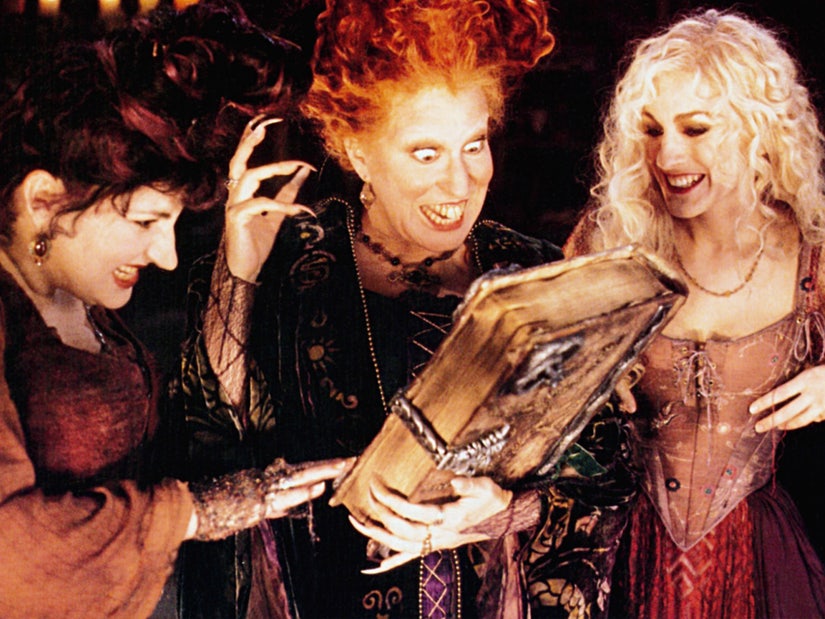 Getting into the Halloween spirit doesn't always have to be scary!

Scary movies aren't for everyone but that doesn't mean you should be excluded from having a Halloween movie marathon! Don't fret -- not every Halloween flick will leave you covering your eyes or hiding under the blankets.

Tons of films have been released that are fitting for the spooky season, from Tim Burton classics like "Corpse Bride" and "Nightmare Before Christmas" to iconic Halloween films like "Hocus Pocus." We can't forget family-friendly options like "Halloweentown" and "ParaNorman" -- and we know "Boo! A Madea Halloween" will keep you laughing.

Leave the horror and gore behind and find out what you should be watching this Halloween season ...

The "Halloweentown" series has become an essential part of any Halloween movie marathon as they follow Marnie and her siblings after they find out they come from a family of witches. The four film saga follows the crew from their first visit to Halloweentown - filled with warlocks, vampires and more - all the way to Marnie's decision to attend Witch U!

Tim Burton is the king of Halloween films and "Corpse Bride" is no exception. The beautifully animated flick follows Victor, who accidentally marries a dead bride while rehearsing his wedding vows. Stuck in the Land of the Dead, Victor must get back aboveground before his real bride-to-be marries the villainous Barkis Bitter.

One of the most iconic Halloween flicks, "Hocus Pocus" follows a trio of kids who accidentally free a coven of evil witches who were hung during the Salem Witch Trials 300 years prior. They must now stop the witches, played by Bette Midler, Sarah Jessica Parker and Kathy Najimy, from taking over Salem and becoming immortal.

"Nightmare Before Christmas" also comes from Tim Burton and follows the misadventures of Jack Skellington, the beloved pumpkin king of Halloweentown. Bored with the same annual routine, he accidentally stumbles on Christmastown and with a new lease on life, he plots to bring Christmas under his control by kidnapping Santa Claus. Have too many movies to watch in October? This one works in December, too!

In the Halloween installment of Tyler Perry's "Madea" flicks, she finds herself crashing a Halloween party when the teens in attendance decide to scare her with a series of pranks involving ghosts, ghouls and zombies. And if you love the film, make sure to also catch the sequel!

In the first "Hotel Transylvania" flick, Dracula invites a crew of creatures to his hotel to celebrate the 118th birthday of his daughter Mavis. Things take a turn when an ordinary human ends up at the party and falls in love with Mavis. Viewers can follow up with the antics occurring at the hotel in the second and third movies, with a fourth slated for 2021.

"The Little Vampire" follows only child Tony who doesn't quite fit in after moving to Scotland with his family. Stuck in his miserable new life, Tony meets a kid vampire named Rudolph. The two quickly become close but their friendship seems to be doomed when a vampire hunter threatens the entire vampire race.

1990s supernatural film "The Craft" is getting a Gen Z update in the sequel that's set to debut on October 27th. Like its predecessor, the film will follow an eclectic foursome of aspiring teenage witches who get more than they bargained for as they discover their new powers.

Another Tim Burton special, animated flick "Frankenweenie" follows young Victor Frankenstein, who brings his beloved dog Sparky back to life after his untimely passing. All is well until Victor's classmates steal his secret and use it to resurrect other dead animals, which has monstrous consequences.

In "Twitches," twin witches Alex and Cam are reunited on their 21st birthday and realize that their unusual powers double in strength when they're together. They must use them to save the world in which they were born, where their birth mother still lives. In the film's second installment, "Twitches Too," the girls try to live a normal life until they discover their biological father may still be alive.

"Casper" the friendly ghost peacefully resides in a haunted mansion in Maine. When a specialist arrives to communicate with the spirits inside, Casper falls in love with his teenage daughter Kat.

Tim Burton's iconic "Beetlejuice" film follows two ghosts who enlist the help of a rambunctious spirit named Beetlejuice to drive out the unbearable humans living in their home. Things take a turn when his help quickly becomes dangerous for both the ghosts and the family inside.

In "Fun Size," high school senior Wren is left to look after her younger brother Albert on Halloween night. When she gets distracted by a party invite, Albert disappears into a sea of trick-or-treaters, leaving Wren and her friends to set out on a frantic search to find him.

"ParaNorman" follows young Norman Babcock, who has the ability to speak with the dead. He soon discovers that there is a centuries-old witch's curse on his town and only he can stop it. Along the way, zombies rise from their graves and he must summon his courage to save his fellow townspeople.

Mockumentary "What We Do In The Shadows" chronicles the adventures of three vampires struggling with the mundane aspects of everyday life like paying rent and dealing with roommates. If you love the movie, also be sure to check out the TV show on FX.

Perhaps one of the spookiest families in entertainment, the Addams family has been featured in plenty of films and television shows. In 1991, they hit the big screen in a live action flick, which followed the family as they faced two men who were conspiring to swindle the Addams' fortune.

"Coraline" follows a young girl of the same name who discovers a secret door in her new home. Behind lies an alternate world that closely mirrors her own but, at first, appears to be slightly better. She enjoys her new world until her alternate universe mother tries to keep her there forever.

Cult classic "The Rocky Horror Picture Show" chronicles what happens when sweethearts Brad and Janet end up at the eerie mansion of Dr. Frank-N-Furter. Their discovery leads to a wild night of music and some eccentric characters like a rocking biker and a creepy butler.

In the film that inspired the "Buffy the Vampire Slayer" series, Buffy Summers learns that it's her fate to hunt vampires. While she's a quick study, she soon must take on a very dangerous vampire.

In musical "Little Shop of Horrors," flower shop assistant Seymour discovers an unusual plant that feeds only on human flesh and blood. While the growing plant attracts a great deal of business for the previously struggling store, Seymour must also come up with more bodies for the increasingly bloodthirsty creature.

The two witch sisters in "Practical Magic" don’t dabble in magic ... that is until one of their boyfriends dies and they need to get a crash course in witchcraft. Along the way, the girls inadvertently possess him with an evil spirit which threatens to destroy their family line.

A young Fred Savage stars in "Little Monsters," which sees his character Brian befriending a wild-eyed boogeyman. At night he joins him in the netherworld of monsters and the pair have a blast until Brian realizes he’s turning into a monster himself.