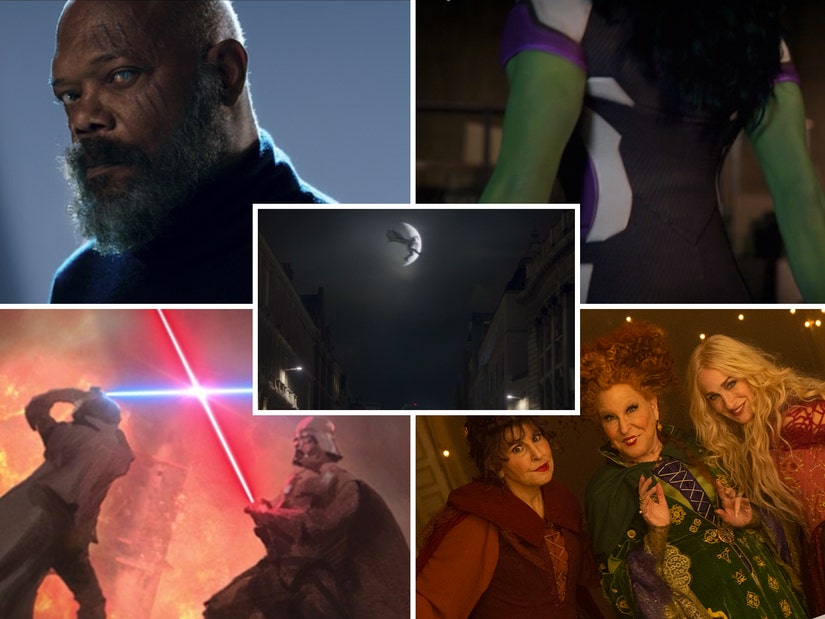 Disney+ is here and ready to break the Internet.

As a thank you to its global subscribers, The Walt Disney Company announced the first annual Disney+ Day earlier this year -- and today, Friday, November 12, it all went down.

The event, unrolling all over the streamer's various social media accounts and on the app itself, featured a number of sneak peeks at their upcoming projects across their many brands -- including Disney, Pixar, Marvel, Star Wars and National Geographic.

Fans hoping for new glimpses at upcoming MCU shows like "Moon Knight," "She-Hulk," "Hawkeye" and "Ms. Marvel," as well as Star Wars series including "Obi-Wan Kenobi" were in luck, as footage, concept art and logos were all revealed -- as well as a few surprise series, like the revival of the '90s "X-Men" cartoon and an animated "Spider-Man" show.

The streamer also added films like "Shang-Chi and The Legend of the Ten Rings," "Jungle Cruise" and the fan favorite "Enchanted" to its library on Friday, and premiered new projects including the "Home Alone" sequel "Home Sweet Home Alone," "Olaf Presents" and the "Luca" short "Ciao Alberto."

Below is a full breakdown of the day's big reveals:

And who better to kick off the #DisneyPlusDay adventure *together* than Dwayne Johnson (@TheRock) and Emily Blunt?! pic.twitter.com/304BmMasYm

The Rock and Emily Blunt kicked off the festivities with some of their trademark banter in a video not only starting the day but also reiterating that their film, "Jungle Cruise," is now available on the streamer.

From there, Disney+ confirmed that a new "Ice Age" movie is coming very soon, sharing the first trailer for "The Ice Age Adventures of Buck Wild," which drops January 28th. Star Simon Pegg also shared a message to fans.

We can’t see it, but we’re 100% certain @SimonPegg’s ice sculpture was one for the ages. #DisneyPlusDay @IceAge pic.twitter.com/jO9ER2q6Ey

The streamer then confirmed that a "Baymax" series is coming in Summer 2022, following the events of "Big Hero 6."

A new "Cheaper By the Dozen" movie, starring Gabrielle Union and Zach Braff, is also coming in March 2022. According to Union, the movie will follow a "multiracial, blended family of 12 navigating their home life while managing their family business."

.@ItsGabrielleU and @ZachBraff are giving you a dozen reasons to be excited this #DisneyPlusDay. pic.twitter.com/r8Sr0nQmQ7

To celebrate the arrival of "Enchanted" dropping on Disney+, Amy Adams and Patrick Dempsey also shot a video not only reiterating it's availability, but also confirming the sequel "Disenchanted" is coming out in Fall 2022.

An animated "Diary of a Wimpy Kid" is also hitting the streamer on December 3, with the first poster getting its big reveal. Another film in the franchise, "Rodrick Rules" will also drop in 2022.

Amy Adams and @PatrickDempsey are sharing a bit of magic straight from Andalasia! #DisneyPlusDay #Disenchanted pic.twitter.com/gOdflzQWWs

Also coming soon to the streaming service: Peter Jackson's three-part event, "The Beatles: Get Back" on November 25th and an animated Rescue Rangers movie starring John Mulaney and Andy Samberg as Chip and Dale in Spring 2022.

Samberg promised the movie isn't a "reboot," but a "comeback" ... whatever that means!

We also got our first look at Bette Midler, Sarah Jessica Parker and Kathy Najimy back in costume as the Sanderson Sisters as they film "Hocus Pocus 2," hitting Disney+ in Fall 2022.

Chris Hemsworth, meanwhile, teased his upcoming six-part NatGeo series "Limitless with Chris Hemsworth," showing him pushing himself to the limits by doing some completely crazy stunts in the wild.

Will Smith is getting his own six-part NatGeo series too, titled "Welcome to Earth," which sees him traveling to the ends of the earth. The series takes him into the ice, the jungles and deep into the ocean. The show premieres December 8.

Follow @WillSmith to the ends of the Earth, literally. Welcome to Earth, an Original Series from @NatGeo, is streaming December 8 only on #DisneyPlus. #WelcomeToEarthSeries #DisneyPlusDay pic.twitter.com/eanWnNNGKX

Disney+ is also reviving "The Proud Family" for a new series, "The Proud Family: Louder and Prouder," with episodes starting February 2022 and featuring the voices of Lizzo, Tiffany Haddish, Gabrielle Union, Lil Nas X and Cedric the Entertainer.

While "HSMTMTS" was previously renewed for a third season, Disney also confirmed it will debut in 2022. No additional details were revealed. The streamer also confirmed that a new live-action series based on "The Spiderwick Chronicles" is on its way, before sharing some concept art.

Lace up and dream. #Sneakerella, an Original Movie, premieres February 18 only on #DisneyPlus. #DisneyPlusDay pic.twitter.com/gzliCS3MjO

They’re 🗣louder🗣 and 🗣prouder🗣 – and on their way! #TheProudFamilyLouderAndProuder, an Original Series, starts streaming February 2022 only on #DisneyPlus. #DisneyPlusDay pic.twitter.com/5nVUiiCVif

Your field guide to a world of fantasy. #TheSpiderwickChronicles, a new live-action Original Series based on the best-selling books, is coming to #DisneyPlus. #DisneyPlusDay pic.twitter.com/AbDkEPntZV

Warwick Davis made an appearance from the set of Disney+'s upcoming "Willow" series, a followup to the 1988 movie. He then introduced the rest of the cast, which includes "Spider-Man" star Tony Revolori, "Falcon and the Winter Soldier" alum Erin Kellyman -- who was in "Solo" with Davis --Ruby Cruz, Dempsey Bryk, Amar Chadha-Patel, Ellie Bamber. The show will premiere in 2022.

Disney+ Day dropped its first Star Wars goodies two hours into the event, sharing a trailer for "Under the Helmet: The Legacy of Boba Fett." The documentary special is already available on the streamer, giving viewers a full breakdown of the fan-favorite character from his first appearance in the films ahead of the "Book of Boba Fett" series, which drops later this year.

You know his name. Revisit his story. Under the Helmet: The Legacy of Boba Fett, an Original Documentary Special, is now streaming on #DisneyPlus. #DisneyPlusDay pic.twitter.com/TJzMeRNKCp

The goodies kept coming as a behind-the-scenes look at Ewan McGregor's "Obi-Wan Kenobi" series was dropped on the streamer itself -- but wasn't immediately made available online.

"The fans have been waiting long enough," said McGregor, as concept art from the series was shown. "This is quite a dark time we're coming into with him," teased director Debroah Chow, "Just being a Jedi, it's not safe, there are Jedi hunters out there." Chow added that Obi-Wan protecting Luke Skywalker is the starting point for the show, adding, "the interesting thing is going to be where it goes from there."

The two also teased the return of Hayden Christensen as Darth Vader. "Have another swing at each other, might be quite satisfying for everybody. We hope you enjoy it as much as we enjoyed making it," added McGregor. You can watch the teaser here if you have Disney+.

A "Cars" series featuring Owen Wilson and Larry the Cable Guy as Lightning McQueen and Mater, respectively, dubbed "Cars on the Road" will also premiere in 2022. Check out some of the concept art below.

Rev your engines: Owen Wilson and Larry the Cable Guy return to voice Lightning McQueen and Mater in the #DisneyPlus Original Series: Cars on the Road, streaming in 2022! #DisneyPlusDay pic.twitter.com/NQCu5tW4we

Pixar will also drop feature-length documentaries about its upcoming features "Turning Red" and "Lightyear" in 2022, as well as an animated series called "Win or Lose" in Fall 2023.

A "short-form" series called "Zootopia+" will also debut next year.

The streamer also shared the first concept art for a "Princess and the Frog" followup musical series titled "Tiana" -- dropping in 2013 -- and a preview for the new series "Intertwined," which is available now.

Go back to the fast-paced mammal metropolis of Zootopia in Zootopia+, a new short-form series coming to #DisneyPlus in 2022! #DisneyPlusDay pic.twitter.com/BPyiK5nKog

Her future depends on the past… Disney Intertwined (Entrelazados), an Original Series, is now streaming only on #DisneyPlus. #IntertwinedSeries #DisneyPlusDay pic.twitter.com/RAdWMnoCPz

Getting into some Marvel territory, Disney+ is also reviving the '90s "X-Men" cartoon with a new animated series titled "X-Men '97." The series won't debut until 2023.

They also dropped a logos for "Moon Knight" -- which will star Oscar Isaac in the title role and likely feature Kit Harington -- and "She-Hulk," starring Tatiana Maslany. Disney only said both would be "coming soon."

The streamer also confirmed that an animated "Spider-Man: Freshman Year" series is on its way, as well as an animated series titled "I Am Groot." We also got logos for "Ironheart" starring Dominique Thorne as Riri Williams and "Agatha: House of Harkness," which will see Kathryn Hahn reprise her "WandaVision" role -- both series "Coming soon."

Marvel fans will also be getting an animated "Marvel Zombies" series and dropped the first "Secret Invasion" logo. Again, all "coming soon." The latter will star Samuel L. Jackson as Nick Fury, as well as Ben Mendelsohn as Talos.

We've missed you, too. See you in 2023 with all-new episodes. 🥲 #XMen97 #DisneyPlusDay pic.twitter.com/6NrXHDxBeD

While it was not made available online, the streamer also debuted a 15-minute sneak peek at its upcoming slate to the app itself. The first half of the footage was a sizzle reel of the shows which have already debuted, before an extended sneak peek at "Hawkeye."

The brief "Moon Knight" footage showed Oscar Isaac in costume, as he pummeled someone on the ground. There was also a quick shot of him leaping across buildings.

The "She-Hulk" teaser put the spotlight on Maslany's Jennifer Walters ... a not so normal lawyer who just happens to turn green when she's angry. Mark Ruffalo also popped up in the footage, as both Bruce and the Hulk.

"Ms. Marvel," meanwhile, showed Kamala Khan trying on her homemade Captain Marvel costume and jumping into action -- while saying, "It's not usually the brown girls from Jersey City who save the world."

Amid a sizzle of footage and logos, there was also a money shot of Samuel L. Jackson as Nick Fury for "Secret Invasion." Watch the special now right here.