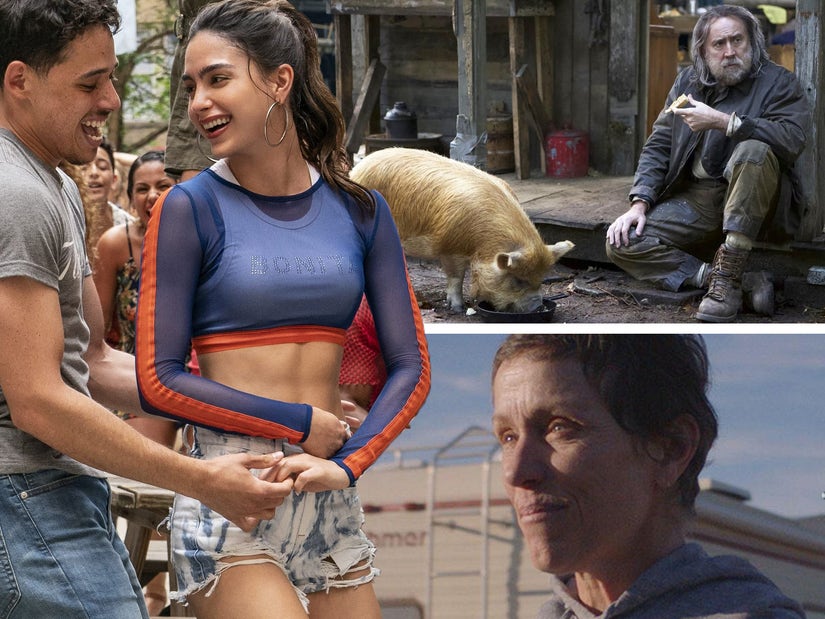 Here are the least ROTTEN movies of 2021

In 2021, movie fans returned to theaters after a year of watching flicks at home. Some long-awaited films finally made their big screen debut while viewers also got their first taste of films that were created in the middle of the pandemic. The year also brought about a shift in how movies were released, with questions still remaining about the best ways for films to reach audiences. But no matter how the landscape changed, one thing was for sure -- 2021 was a good year for movies.

Film critics took a deeper look into the best of the best, ranking the ultimate top 10 movies released in the past 12 months. As for how the list was curated by Rotten Tomatoes? Each movie had to have at least 40 critic reviews and took into account the exact "number of reviews, the year of release, and the average Tomatometer scores of other films released contemporaneously."

Animated flick "The Mitchells vs. The Machines" follows a quirky, dysfunctional family along their road trip which gets cut short when they find themselves in the middle of a robot apocalypse -- and suddenly become humanity's last hope! Critics said the heart-warming family-friendly film will have you crying tears of joy, sadness, and laughter.

"It's the kind of movie you immediately want to watch again and again," Thrillist wrote.

Disney's "Raya and the Last Dragon" captured the attention of both children and grownups, taking viewers on an epic journey to the world of Kumandra, where long ago, humans and dragons lived together in harmony. When an evil force threatened the land, the dragons sacrificed themselves to save humanity and now, 500 years later, the evil has returned. It's up to a lone warrior named Raya to find the legendary last dragon to bring peace to the fractured land and its divided people. Critics praised the film's "gorgeous animation" as well as Awkwafina's starring role in the flick.

"It's…the best kind of feminist film in that it's one that doesn't clobber you with the message. Raya is allowed to be awesome without the script shouting about it all the time and it's better for it," the Associated Press wrote.

"The Power of the Dog" may have only been released in December but it quickly rose to the top of the list of 2021 releases. The film follows domineering rancher Phil Burbank and his brother George, whose lives change after they meet widowed proprietress Rose. When George marries her and brings her back to the ranch along with her son, Phil is cruel and cunning towards the new family. But one day, his mockery of the young man changes and he appears to take him under his wing -- but it's unclear if it's a kind gesture or part of a scheme. Reviews praised Benedict Cumberbatch's commitment to his role and the film's exploration of toxic masculinity.

"Broken into chapters, it starts as a nicely observed period piece, darkens into a psychological drama, then becomes an exercise in dread," Newsday wrote.

"CODA" tells the story of seventeen-year-old Ruby, the sole hearing member of a deaf family -- a CODA, Child of Deaf Adults. She spends much of her time acting as an interpreter for her parents and working on the family's fishing boat every day before class, but at school, she finally finds a passion of her own. When she joins the choir club, she discovers a gift for singing and is encouraged by her choirmaster to apply to a prestigious music school. But her obligations to her family leave her feeling torn about whether she can pursue her own dreams. Star Emilia Jones was a standout in the film, earning comparisons to Winona Ryder and Kate Winslet.

"Each performance breathes life and nuance into what could easily have been a misfire. Instead, the result is tremendously sweet, uproariously funny and one of the best crowd-pleasers this year," the Observer wrote.

Nicolas Cage stars in "Pig," which follows a truffle hunter who lives alone in the wilderness of Oregon. When his beloved foraging pig is kidnapped, he must journey into Portland to recover her, coming in contact with his long-abandoned past. Critics were impressed by Nicolas' performance, which they deemed could be pulled off by very few other actors.

"If you have an open mind, you will be rewarded with a melancholic and poignant story, and a superb, triumphant performance from Cage who has no trouble reminding audiences that he is an Oscar winner capable of incredible range and depth," News.com.au wrote.

5. "Summer of Soul (...Or, When the Revolution Could Not Be Televised)"

In his debut as a filmmaker, Questlove created "Summer of Soul (...Or, When the Revolution Could Not Be Televised)," a part documentary, part music film looking back at ​​the summer of 1969. Over the course of six weeks, The Harlem Cultural Festival was filmed in Mount Morris Park, celebrating Black history, culture and fashion. Questlove compiled the largely forgotten footage which serves as a testament to the healing power of music during times of unrest and features never-before-seen concert performances from Stevie Wonder, Nina Simone, Gladys Knight & the Pips and more.

"Summer of Soul is both a tribute to the artists and, just as importantly, their audience -- which is what makes it not just a great concert film but a great documentary, period," Rolling Stone wrote.

"In The Heights" was brought from Broadway to the big screen by Lin-Manuel Miranda and Jon M. Chu in a musical celebration of a tight-knit Washington Heights community. Amid a kaleidoscope of dreams in the vibrant neighborhood, is a likable and magnetic bodega owner who hopes, imagines and sings about a better life. Almost every aspect of the film received acclaim, from star Anthony Ramos' performance to the choreography to the musical performances.

"Unpeel the song-and-dance romance and escapism and there's a socially engaged, issue-led drama under the sparkle and pizzazz," The Guardian shared.

"The Father" follows Anthony, an 80-year-old man defiantly living alone. He repeatedly rejects the careers that his daughter encouragingly introduces despite the fact that help is becoming a necessity. With Anne unable to make daily visits and Anthony's grip on reality unraveling, he clings to his memories and the pieces of his past. Meanwhile, Anne heartbreakingly grieves the loss of her father while he's still living. Critics commended the "devastatingly empathetic" portrayal of dementia while praising Anthony Hopkins' starring role.

"The Father could well be the first film to truly convey what it must feel like to be falling into the grips of dementia and is as heartbreaking as it is brilliantly innovative in a narrative sense," The Jewish Chronicle wrote.

2. "Judas and the Black Messiah"

Oscar nominated "Judas and the Black Messiah" tells the true story about the betrayal and assassination of Black Panther Party Chairman Fred Hampton. He was just 21-years-old when the FBI coerced a petty criminal named William O'Neal to infiltrate the Black Panthers and provide intel on Fred. And despite the fact that he was ultimately assassinated, his message was not silenced and echoes to this day. The film received overwhelmingly positive reviews and was recognized as a "major triumph for its director and stars" for its "impressive, explosive and gut-wrenching" plot.

"Judas and the Black Messiah is a film whose focus on racial politics and the horrors of corrupt power are no mere history lesson, but a strong, emotionally compelling tale of humanity with an urgent contemporary message," ABC Radio wrote.

"Nomadland," which took home Best Picture at the Oscars, follows a woman in her sixties, who packs up her van and leaves her town in rural Nevada following the Great Recession. She sets off on the road to explore a life outside of conventional society as a modern-day nomad in the American West. Frances McDormand was celebrated for her outstanding portrayal, as evidenced in the film's stellar reviews and numerous award wins.

"'Nomadland' feels simultaneously like both a memory and a prophecy. [Director Chloé] Zhao has managed to marry these juxtaposing ideas in her film, which is the essence of bittersweet distilled into an arrow and shot straight through the heart," Tribune News Service wrote.