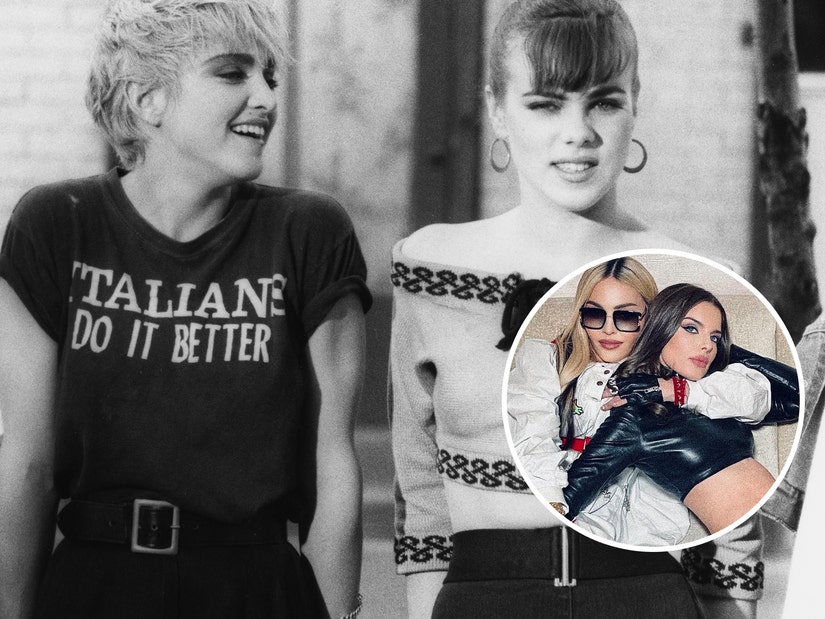 "She reminds me more of Madonna when we were young, then of myself."

Madonna is looking to cast her BFF -- and Julia Fox is apparently in the running.

The Queen of Pop is currently working on a biopic and shared on Instagram that she and the "Uncut Gems" star "went to dinner" to talk about the movie -- before EW confirmed Fox is being considered to play Madonna's longtime friend Debi Mazar in the project.

With media attention around Fox at an all time high thanks to her relationship with Kanye West, Mazar said her phone has "literally blown up this past week" following Julia's meeting with Madge.

"The press is asking me to verify rumors, and paparazzi are literally DM-ing me, to ask to photograph me so they can submit comparisons of Julia and I🤣" wrote Mazar, responding to the casting speculation.

"The one who looks exactly like me, is my 19 year old daughter Evelina, but she is not an accomplished actress ... YET ..." Mazar continued. "I find it all quite amusing, but what I find most interesting is that someone will be playing ME!🤣 It's surreal!"

She went on to say she has no idea what's in Madonna's script or who else the icon is considering for the movie.

"We have been friends for so dam long, I'm curious! It sure has been a journey.
Madonna has an epic story to tell (as do I ... more on that down the road)," she continued. "Our friendship is most precious to me and Madonna is a great visionary. I can't wait to see what she does!"

Mazar said she has interviewed Fox in the past, but the two have never met in person. She added that she'd "obviously be flattered" if the actress portrayed her on screen, saying, "I think she is gorgeous, smart and a very talented actress!"

She does, however, think Fox "reminds [her] more of Madonna when we were young, then of myself."

Wishing anyone who auditions for the role the best of luck, she joked, "If you need dance moves or accent coaching ,gimme a ring 📞 🤣:" -- and added, "Here's a few pics from the early period.I was 18, skinny and blonde. Ok..Now I can avoid the press questions on this matter."

Madonna and Diablo Cody worked together on a script for the biopic throughout 2020. The singer said the movie would highlight her "struggles as an artist trying to survive in a man's world as a woman."

No release date has been announced, though the project is set up at Universal.