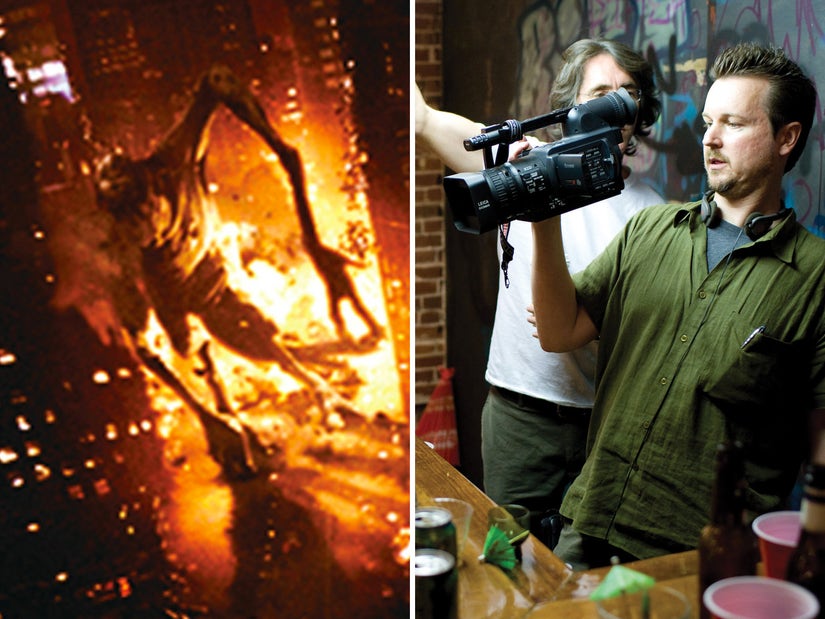 For the film's 15th anniversary, the director also reveals how it changed the trajectory of his career ... and reacts to the two monsters theory!

But when he directed "Cloverfield" back in 2008, he was most well-known as the guy who co-created "Felicity" with J.J. Abrams. While Abrams had already launched both "Alias" and "Lost" and had his "Star Trek" reboot on the way, Reeves hadn't yet made the jump into genre filmmaking.

With the release of "Cloverfield," however, everything changed.

In celebration of the film's 15th anniversary and 4K SteelBook re-release from Paramount Home Entertainment, Reeves spoke with TooFab about how much the movie really altered the future of his career ... even if it felt like sometimes felt like a train wreck during filming.

"This movie was huge for me. When I first agreed to do the movie, there was no script. Drew Goddard had written an outline and I was saying to J.J., 'Why don't I wait until the script is done?' and he said, 'Because we're shooting in 12 weeks.' I was like, 'Oh my god!'" Reeves recalled.

"Drew and I got together and I wanted to talk with him, work with him on the outline and that's how Drew and I became really close. We're close friends now. And I remember through that whole experience of feeling like, this is all by the seat of my pants, thinking this could fail in so many ways, this might be the end of my career," he shared.

Thankfully, it didn't. The movie was a huge success, bringing in more than $172 million at the box office off of a $25 million budget.

"When it worked out and when the movie actually connected, that was a very surreal thing. Obviously, it helped me in my career, but it also helped me creatively because when I first started as a filmmaker and when I was growing up, I loved genre films, but I never imagined myself as a genre filmmaker necessarily," Reeves continued. "But the industry has changed so dramatically, genre films, that's what gets made, that's what it is and 'Cloverfield' was the door that opened that for me, realizing that there was a personal path for me to go down and 'Cloverfield' was the beginning of that."

"It absolutely changed everything for me. It was the beginning of everything I've done since," he added. "'Cloverfield' was nothing like 'Felicity,' I'll put it that way!"

Though the monster movie -- about a group of 20-somethings trying to survive an attack in NYC -- was found footage, it blended some pretty impressive visual effects in with the cinéma vérité-style filmmaking, making for a "Godzilla"-meets-"Blair Witch" hybrid that was definitely new to Reeves. The most challenging scene to film, he says, was one that blended all those elements as the survivors venture onto the streets of the city and wind up smack dab in the middle of the Army and the titular monster.

"This movie, every day we had too much to shoot. All of the money had to go to VFX, so the shoot itself was super fast and you had to be really nimble and that entire sequence I had two nights for and it was in the summer, so I had two short nights," recalled Reeves.

"On the first night, I had to figure out how to stage everything and that wasn't [mapped out visually in pre-production] or anything, I had to figure out how to shoot it and that sequence is probably, maybe it's a minute ... The first night I spend just staging the shot and we ended up shooting about 12 seconds," he continued. "I was like, oh my god, I'm not even close to half. I shot 12 seconds. I literally thought my career was over. There was no coming back on a third day."

He even went home to his wife and said, "That's it, I failed, it's not going to work," leaving her very worried about the second day shooting the scene in question.

"The next day I went back and I remember specifically the VFX guy said to me, he said, 'Matt, don't be bummed out, man, this is the dream.' I said, 'You know what, right now for me, the dream is two people in a room talking. That I can probably finish,'" he joked. "I ended up pulling it all together and finished the rest of that shot."

"The funny thing is after, my wife said to me, 'You had tanks?!' You didn't tell me you had tanks. I felt so bad for you, I wanted to come to the set, I wanted to see tanks!'" added Reeves. "It was a pretty weird experience, but that was definitely the hardest. A lot of it was hard, but that was definitely hard because it was like, how are we going to bring all of these elements together."

After that sequence, the gang ventures into the subways, where they're swarmed by smaller creatures which fell off the larger one's back. Lizzy Caplan's character is bitten, badly, and succumbs to her injures in the most violent way possibly -- by basically popping into a pool of blood. It's a gnarly moment that didn't get the movie an R-rating thanks to some inventive shadow-puppetry that, again, nobody was certain would work.

"We were shooting in this closed down mall in Arcadia, everything was the seat of out pants, 'Is this going to work?' and they were doing this thing where they rigged up this thing where as you go by and you see her shadow, there's all this blood that you splash up against the screen," explained Reeves.

"One thing I did know, as we were shooting it, I knew that Lizzy's performance and what [costar TJ Miller] was doing ... she had this harrowing, she's screaming as they're pulling her away and everyone's freaking out. Okay, it's got the right tenor, but that effect of when the blood, is that going to work?" he recalled thinking. "It's one of those things where we shot it four times and one of them worked. You just don't know."

"What was really fun was to watch the movie with an audience for the first time and see them react to that moment. Nobody expects that she's suddenly going to erupt into an explosion of blood and so that was super fun," he added. "The whole thing was just like, you try things and go, is it going to work? I remember thinking, this could go wrong in almost every way in almost every scene."

In the years since the movie's release, it's spawned two quasi-sequels, neither of which Reeves wrote or directed. The latter film, "The Cloverfield Paradox" ended with a shot of a gigantic version of a similar monster, while fans online have long speculated that there are, in fact, two different monsters in the original film. According to that theory, the main creature we see throughout the film is a baby, while its mother can be seen during a bridge attack elsewhere in the movie.

Reeves, however, had never heard of the debate and stated they made the film as if the creature were a child.

"That to me was always the idea. You gotta direct a monster, okay, it's separation anxiety," he said. "The reason he's doing all this is because he's like, where's mommy? And he's in his own heightened state."

After hearing a breakdown of the two monster theory, he added, "I love that. As you asking me to confirm that? That sounds super cool! Love it."