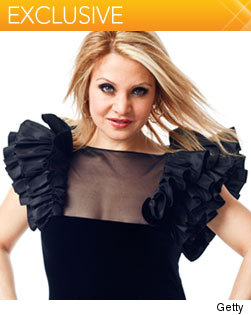 Tony Award-nominated actress Orfeh will kick off her five-week run in the off-Broadway play "Love, Loss And What I Wore" on Wednesday in New York City, but she doesn't even know her role yet!

"They don't assign the parts until you get there," Orfeh tells TooFab of the production, which is written by Nora Ephron and Delia Ephron and based on a book of short stories about women, by Ilene Beckerman. "I haven't done anything like this before. I'm really excited to do something where I'm not bursting into song in the middle of a scene."  (Orfeh was nominated for a Tony for "Legally Blonde," and has appeared in the Broadway productions of "Saturday Night Fever" and "Footloose," in addition to TV and movie roles.)

Even though Orfeh doesn't know the role she'll play, she isn't worried. "I've seen the show a couple of times so I have a really good idea what the whole structure of it is," she says. "It's a great show, and it's really poignant, and it touches you on a level that's kind of universal."

Luckily, Orfeh has a husband who understands the tumultuous world of acting: He's Andy Karl, star of the Broadway production of "Wicked." "We are definitely each others' coaches, when we have auditions, and we bring home the scripts. It's very difficult not to be able to hear the lines back. You need someone to be able to tell you the beat and the moment, so it's good to have another actor for sure."

And when she's not reading lines, Orfeh loves to exercise.  "I do a lot of free weight training," says Orfeh, who also spins at the New York City cycling studio SoulCycle.  "Many years ago, before it was really cool to do, I used to spin a lot. I've been doing that again, but now it's like the trendiest thing on the planet. I do a lot of things that will just keep your metabolism revved for well past the hour that you're in the gym."

Kim Goes Behind the Scenes of Kourtney Fight

Luann de Lesseps Has Forgiven Herself for Alcohol-Fueled Mistakes, Hopes Fans Can Too…