Everyone is talking about Jennifer Aniston's summer fling with Justin Theroux, and "Millionaire Matchmaker" Patti Stanger is adding her two cents. 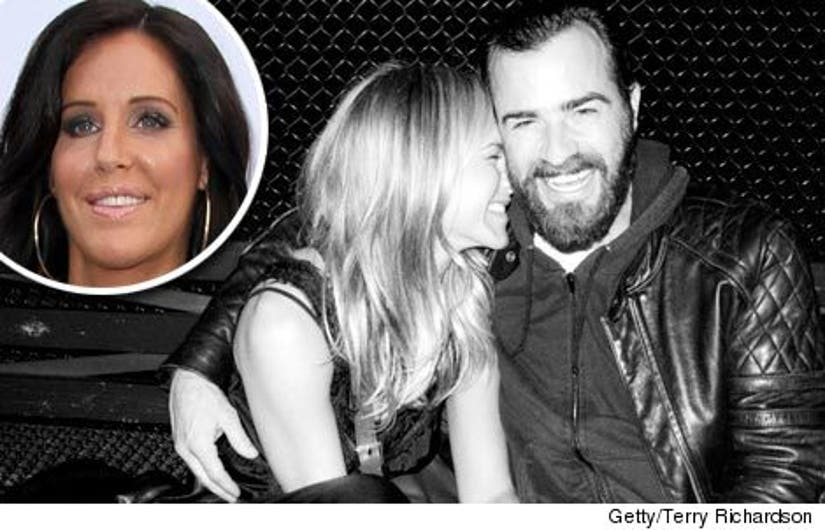 Stanger joined TooFab's Lawrence Yee to talk about celebrity couples, summer flings, and Season 5 of her hit Bravo show "The Millionaire Matchmaker." Check out the exclusive interview below.

TooFab: What do you think of Jennifer and Justin's whirlwind romance?

Stanger: I like him for her. I think he's a goodfit for her. But how you get a guy is how you lose a guy [referring to Theroux's 14-year relationship with his ex]. He was like, "Bye! You were my training wheels. Now I'm going off to get my real Schwinn." I mean what IS that? She's not a great picker -- she had John Mayer. C'mon, let's be serious.

TooFab: How do you feel about them moving in together?

Stanger: That's too soon. That's way too "I wanna marry you" creepy. And she needs to think about that. She makes way more money, there better be a pre-nup. He needs to court her first.

TooFab: What about Blake Lively and Leonardo DiCaprio? She has a big movie to promote ["Green Lantern"] and he just broke up with [Israeli supermodel] Bar Refaeli.

Stanger: First off, I love Leonardo. I'm a huge Leo fan. I don't really feel Bar is out of the picture. She always seems to surface. I think Blake has the whole Katie Holmes "when I was a little girl I lovedyou and I always wanted to marry you" thing. Now it MIGHT work, but I don't see it here. I think it's a flash in a pan. Very similarto Sean Penn and ScarJo. I'm rooting for him to get the Jew.

Stanger: Cleaning the pipes out? Absolutely. But you gotta be carefulas a girl because you can get oxytocin bonding which is a chemical in your bodythat's fueled by estrogen. So you can fall in love with a loser as well as a good guy.And if the good guy isn't a good guy you can get screwed.

TooFab: What are your three commandments for summer dating?

Stanger: You want to have a flirty cocktail that matches yourpersonality. Anything that says, “hey I'm different I'm not just a vodka soda”kind of girl [Stanger recommends Pucker Vodka, which comes in a variety of bold flavors]. Second, you want to take a girl somewhere that relaxes her; maybe a horseback riding, a cocktail at a Mexican restaurant. Third, you don't have to spend a lot of bucks.

TooFab: How do you know if a summer fling is the one?

Stanger: It's all about the kiss. You basically can tell by temperature reading if you like a guy the way he kisses you. That's when you begin to warm up. And that's when a guy knows he can get in.

TooFab: What's coming up on Season 5 of "The Millionaire Matchmaker"? You're back in L.A.

Stanger: I wanted to go to Miami but I don't think they'll ever send me on the road again.Casting was atrocious. Bravo is totally adamant about keeping me in L.A. They think the flavor in L.A. is different than anywhere else. We've got Tori Spelling on the show as an expert. We have Jenny McCarthy. And ... I'm single, so I had to do a mixer.

Stanger: There's a lot of crazy clients like we always have. There's not as many millionairesses this season, it's more about the men. A lot of great gays. We have FABULOUS gays. Wehave Frank Marino who headlines the Divas show in Las Vegas. One of the things I wanted to do with the show was teach you how to date week to week. You're going to get the tip of the week.

TooFab: Has the recession affected your clientele?

Stanger: It has never changed us. There is always a millionaire in every corner. Silicon Valley is still blowing up, and they have no women up there. So they're coming down here getting the L.A. connection.

TooFab: What else is going on?

Stanger: I'm writing a screenplay to my book "Become Your Own Matchmaker." I'm writing a cookbook called "Mancatcher Meals." I'm getting skinny on Sensa because I have to stay thin to be in this industry.

And Pucker Vodka, that's my favorite thing right now. Cosmos and margaritas are boring; I want something different. And they're low calorie too! Nothing is better than dating a guy two, three times and he orders your drink. That's the key, you want a guy who knows what you're eating from salad dressing all the way to your drink!