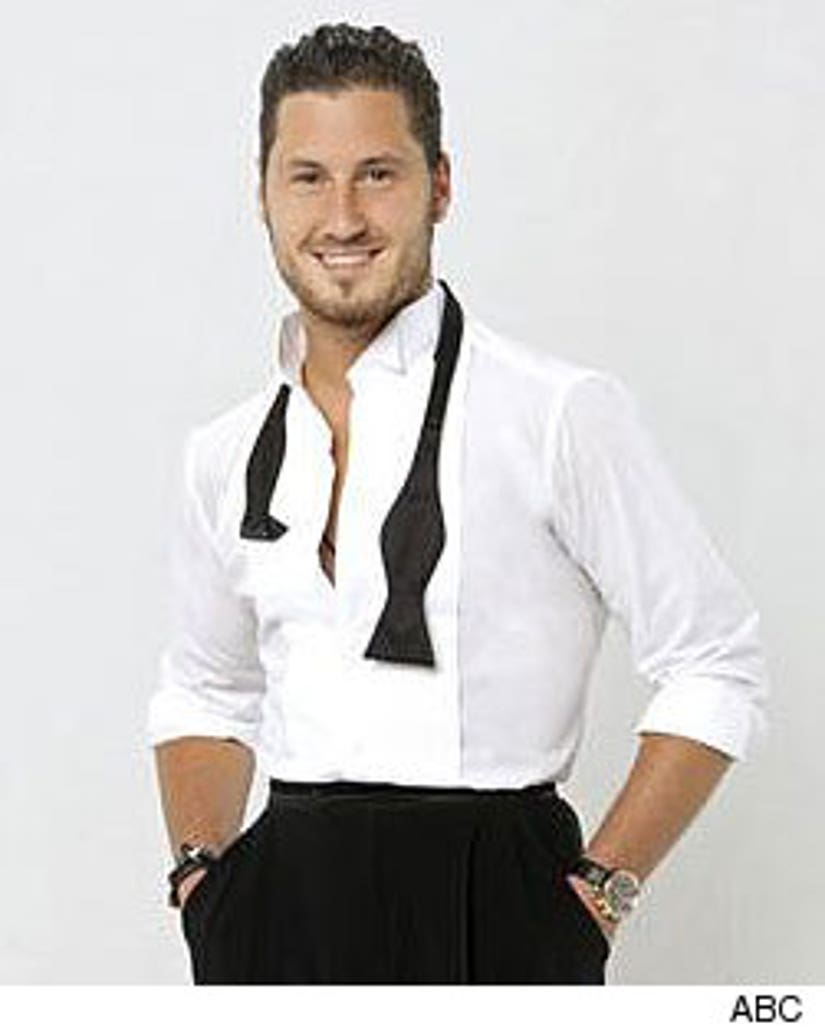 Valentin Chmerkovskiy is the younger brother to “Dancing With the Stars” pro Maksim Chmerkovskiy.

Although the two have never officially competed against one another, due to an age difference, Valentin insists there will be no competition.

TooFab's Jessica Adamovich and Anthony Dominic caught up with Valentin Chmerkovskiy to get the scoop on the pressure, his partner and Marilyn Monroe? Check out the exclusive interview below:

TooFab: So obviously your brother Maksim has been on the series since season two, how come you decided to join?

Chmerkovskiy: The show approached me in the past, about maybe two years ago, but I declined because I was a competitive dancer for 16 years and I had personal dreams that I wanted to achieve. I didn't want to pass up the opportunity for Hollywood, or do “Dancing With the Stars”. I made that sacrifice for a title you could say, and once I got that title I felt accomplished in my competitive career and felt like I was ready for that step.

TooFab: Did you and your brother compete a lot with each other growing up?

Chmerkovskiy:Well there is a 6 year age difference between Maks and I. He is six years older than me and fortunately for him we never had the ability to be in the same category. We never competed against each other but if there was a situation where we would have, we probably would have supported each other regardless.

TooFab: What are you most excited about?

Chmerkovskiy: I am most excited about doing a show with my brother. Its been five years since he has started the show and in those five years I have seen him fewer and fewer times. So to be able to work together and see him on a daily basis is exciting for me. This is such an amazing opportunity for me, because I have worked 16 years for this. To be able to have this exposure and this kind of talent that it takes to be on this show. To be able to perform in front of millions of people is a huge privilege for anybody and I feel very blessed to have this opportunity.

TooFab: If Elisabetta Canalis wasn't your partner, who from this season would you love to dance with?

Chmerkovskiy: Wow that's tough! If Elisabetta wasn't my partner, who I would want to dance with? Probably Chaz Bono because he has so much publicity.

TooFab: Is Elisabetta everything you expected her to be, considering no one knew much about her apart from being George Clooney's ex-girlfriend?

Chmerkovskiy: I am the type of person that really takes responsibility for his actions. I signed up for this show to be a great professional, choreographer and teacher and they are supposed to give me somebody to work with. I have met a lot of celebrities in the past, I'm not star struck I've worked on stage and TV for a long time. So you know, I know my job is to come in and teach a beginner how to dance. The beginner happens to be, Elisabetta, and it's a pleasure that I have met her and continue to work with her, and hopefully we continue to work together for the next three months all the way until finals. I didn't have any expectations of who I was going to get and it couldn't have worked out any better.

TooFab: There has been a lot of backlash against Chaz Bono performing, do you have any comment?

Chmerkovskiy: I think he is a great guy, and that's how I want to say it. Whatever choice people make in their life, you have to respect their choices and still wish them happiness. I wish him happiness in whatever form he chooses to be in. I am looking at him as a personality and an individual. He has a great personality and is a great individual. So you know that's all I am really thinking about.

TooFab: From what you have seen so far, who do you think the best celebrity dancer is?

Chmerkovskiy: The best celebrity dancer is … probably Brooke Burke (laughs). No, with the celebrities I think it's difficult to say, because we haven't had joined practices. We haven't seen everybody in the outfits and final dance form yet. That's why I think it's too early for me to say anything. But you know everybody has a chance, no one is perfect on the show. Everybody has their strengths and weaknesses so it's up to the coach to camouflage the weakness and explore the strengths.

TooFab: Is it hard competing against your brother? When egos come into play, who do you think has the bigger ego?

Chmerkovskiy: Oh out of the two of us? I think both of us are super humble guys with zero ego [laughs]. We don't have competition and when it comes to “Dancing With the Stars” my priority is only around the success. I am not really thinking about my brother, honestly. In terms of life, I am his biggest fan and he is my biggest fan. We are the only two brothers, so we support each other. Our parents raised us to fight for each other and never against each other. Every time he gets a break and something great happens to him it might as well have been done to me, so I am thrilled and super excited.

TooFab: You have been dancing since you were young, did you ever get bullied or teased growing up?

Chmerkovskiy: As you know, growing up I was fortunate enough to have parents that would teach a lesson to their kids. Growing up I played violin for 17 years on an ambitious level you could say, orchestra, Carnegie hall, Lincoln center. I danced on an ambitious level as well, world class. So everything I did was full out. I went to school, had great grades, I was disciplined to try to be the best at everything I did. Dancing was something that was later on in my life. As I became older and independent, when I was 18-20, and at that point the teasing stops.

TooFab: If you could pick anyone in Hollywood to be your dance partner who would you be?

Chmerkovskiy: Marilyn Monroe and not because physically she was, you know, or had any history in dance, but just because she is a landmark figure. She was a huge staple in Hollywood and in order to do that you have to have immaculate stage presence, and I am fascinated with people who have presence. Presence is something some people have, or some people don't and I know for a fact she had it. She would have been a pleasure to be around.

TooFab: What do you look for in a girl?

Chmerkovskiy: For me, a sense of strength along with a nice sense of sarcasm and humor. I think those are the sexiest qualities in a woman.

TooFab: What opportunities are you hoping this experience would open? Do you have any desire to act or sing- maybe you can mix things up and create the Ballas-Hough cha-mara-cough-ski band?

Chmerkovskiy: Nah, I am a member of a one man band. I have been around music my whole life, with dance and music, with violin I was classically trained, and five years ago I started getting more into urban style music, hip hop, things like that. I am an artist and I try to express my art through many channels, so if acting comes up I could do acting. It depends where I find my inspiration, so if I am inspired I can be successful.