Jillian Michaels made headlines when she left "The Biggest Loser" this summer after ten seasons (she was replaced by Anna Kournikova). But the personal trainer is still helping people on TV, and sat down with Prevention magazine to talk about her new endeavors -- including motherhood.

Click on the "Launch Gallery" button below for more photos of Jillian and for excerpts from the interview. 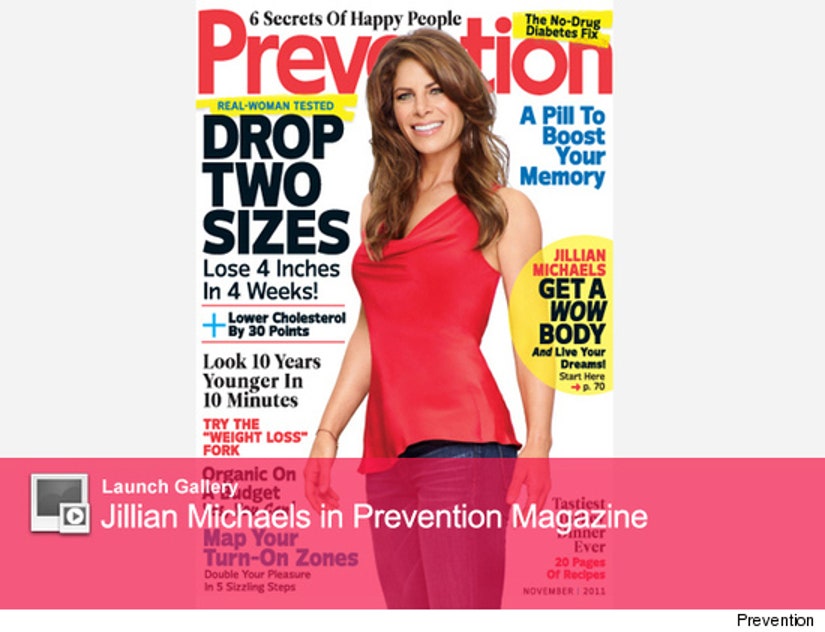 On how she feels about "The Biggest Loser" and why she needed to leave:

Michaels: One of the problems with “Loser” is that it doesn't give the audience the 360 view of what's going on. It doesn't show the deeper conversations or the interview where you explain why you did this or that, because they don't think it makes good TV. People didn't get that this was a job that I was doing in a very specific environment with a group of individuals who are, quite frankly, committing suicide. It's very different from who I am in my personal life. I say to people, "If you're a lawyer, do you interrogate your children? If you're a scientist, do you run experiments on your kids?" People have a hard time understanding that that job is a very special one that requires a specific skill set. And I think I did it very well. But now people underestimate my soft side. That's a big reason why I needed to leave the show.

The One Thing She'll Miss About "Biggest Loser":

I'm going to miss one thing about "Biggest Loser," and that's [fellow trainer] Bob [Harper]. Period. I mean I'm still going to be working with people who need help getting healthy or need help losing weight, or whether it's through my books, DVDs, podcast....or even segments on "The Doctors or Dr Phil", but there's one thing about "Biggest Loser" that's irreplaceable, and that's Bob.

On her new role with "The Doctors" and "Dr. Phil":

Michaels: On "The Doctors," I'm a voice of prevention. If someone has PMS, I will ask, 'Why is your PMS so bad? What are you eating? How are you living? What can we do holistically to improve this? So it will be a natural, lifestyle approach to solving problems.

On Transitioning from "Biggest Loser" to "The Doctors":

Michaels: On "Biggest Loser" you're edited for better or for worse, so if you get repetitive they can edit you out. Whereas on daytime, it's one take, it's live to tape and it's five days a week. So we need to keep it fresh, we need to keep it interesting, you don't wanna constantly loop yourself and rehash old dialogue and old material. So I think that is going to be a real challenge for me, five days a week is a lot of TV time, I want to make sure I don't get boring to people. I've wanted to be in daytime quite honestly since I ended up in television. I ended up on "Biggest Loser" and it was a fluke, I had no intention of being in TV. But once I recognized the power of television as a platform to get out a message, I realized primetime is actually not the right platform, daytime was the platform where you can truly convey information. You can still be entertaining, you can still be inspiring, and uplifting and motivating, but it's more informative, and with that information people can truly utilize it to make real change in their lives. So, I'm just looking forward to having a direct relationship with the viewer, having a dialogue with them. Honestly I'm excited to be 360, not a caricature on "Biggest Loser," it's a whole new medium and one I've waited years to get into.

What she learned from "Losing it with Jillian" (her spin-off that struggled):

Michaels: I learned never to go against my gut instinct, I think the show had really good intentions, I think in its inception it was a great idea, but it was rushed and botched and squeezed into an impossible schedule. The show was literally picked up three weeks before we were about to start shooting it and we had no show runner...I do what I do, but I don't produce television...I knew it was wrong, I knew it was wrong the entire time, I knew it wasn't ready. They were casting people that were 300-400 pounds and saying 'ok you have six weeks' and I was saying you can't take people on this journey and come back and people are going to look the same after only 6 weeks. And I got bullied and threatened into it...lesson is...if you know it's wrong...be strong enough to put your foot down.

At press time, she was also waiting to adopt a baby; but she is far from alone in the pursuit, she she has a substantial support system in her assistants, who have gleefully dubbed themselves "Team Baby."

Michaels: I honestly don't know how somebody without money and help could ever get this done. It's a full-time job. If I called the girls down here to where we're sitting, they would run you through how many times the notary has been here this week….I regret saying this now, but I think for anyone pursuing this [I'd advise them] to explore foster care in this country. In the US, you get your referral, you bring the kid home. They're already American citizens. I don't want to tell people to not adopt internationally – but I've learned that you've got to have tremendous patience and financial resources because it's going to cost a lot of money. If you don't have those two things, go domestic.

If she's thinking about her own show:

Michaels: I'm not really thinking about my own show right now. I'm really focused on learning this daytime medium and contributing as much as I can on this show that I'm gonna be on. So, I just got on The Doctors and I want to kick ass there and then we'll see what the future holds. If I did do my own show again in the future, it really comes back to standing in my own power and setting boundaries.