Anthony Mackie first gained acclaim for his turn as a bomb squad member in "The Hurt Locker."

In the new film "Real Steel," out in theaters this weekend, the actor plays Finn, a cocky boxing promoter who plays an important role in Hugh Jackman and Dakota Goyo's lives. TooFab's Lawrence Yee spoke with Mackie about his inspiration for the role and why he thinks the current state of boxing is a joke. 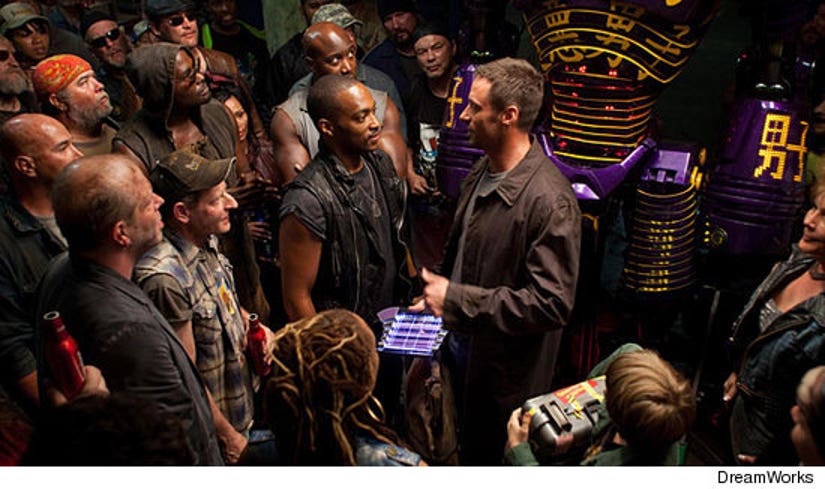 TooFab: This role is a real departure from some of your heavier former roles. What attracted you to this project?

Mackie: I really wanted to work with [director] Shawn Levy, who I've been tracking since the first "Night at the Museum." I love boxing. I was so excited by the idea of capturing this world. I feel like a lot of movies rely on CGI and the audience leaves asking "where's the story?" Real Steel is a great family story as well."

TooFab: As Finn, you have to take on a cocky, larger-than-life personality? Is that you in real life?

TooFab: Did you study ring announcers like Michael Buffer for your character?

Mackie: The greatest asset to boxing is Don King. He made boxing into the show that it is. He said, "Set yourself on fire and the world will pay to watch it burn." When I read the script, I saw Don King; not the shifty guy people think of him now, but the strategic showman.

TooFab: Did you watch the Mayweather/Ortiz fight [where Mayweather knocked out Ortiz while he was apologizing for a head butt]

Mackie: I did. I am so glad Ortiz headbutted Mayweather. Those two punches [Mayweather threw to knock Ortiz out] were the first two real punches I've seen in boxing in a long time. We grew up watching boxers like Mike Tyson where guys would get knocked out. When they left the match they would have towels over their heads because they were so messed up. Nowadays it doesn't even look like boxers fight. Now it's about the car you drive and going to the club after the fight. [The Mayweather KO] was a step in the right direction.

We're not going to get the fight that we want to see, which is Mayweather versus [Manny] Pacquio. I think it says a lot that Pacquio won't do Olympic drug testing.

Boxing is a joke. I'm waiting for the Klitsckhos to go away. I've never seen two worse boxers than the Klitsckho brothers. There needs to be a new Don King who will bring it back.

TooFab: Tell me how it was working with Hugh Jackman.

Mackie: Hugh was great, really refreshing. He's in a position in the career to be an a--hole, but he was the nicest guy.

Mackie: Dakota was great. He played basketball all the time. He's a cool little kid who was more more professional than most of the adults. Shawn [Levy] made sure he was the captain of the football team but everyone played their part.

TooFab: There's reportedly a sequel in the works. Can you talk about that? What's next for you?

Mackie: I hope I'm in the sequel [laughs]. I just shot "Abraham Lincoln Vampire Hunter" and am in L.A. shooting "The Ganster Squad" with Sean Penn, Ryan Gosling and Josh Brolin.

Catch Anthony in "Real Steel," out in theaters this weekend!