14-year-old Chloe Moretz isn't even old enough to see "Taxi Driver" (heck, she barely cleared the minimum age for PG-13), but that didn't stop her from recreating a famous scene from the Martin Scorsese film for the November issue of Harper's Bazaar.

The teen actress channels Jodie Foster's teen prostitute Iris from the 1976 film. Keanu Reeves plays the role of taxi driver Travis Bickle, originated by Robert De Niro. In another shot, Moretz stares into the camera with a not-so-innocent look. The photos are part of a homage to Scorsese's works. Click on the "Launch Gallery" button to see even more of them: 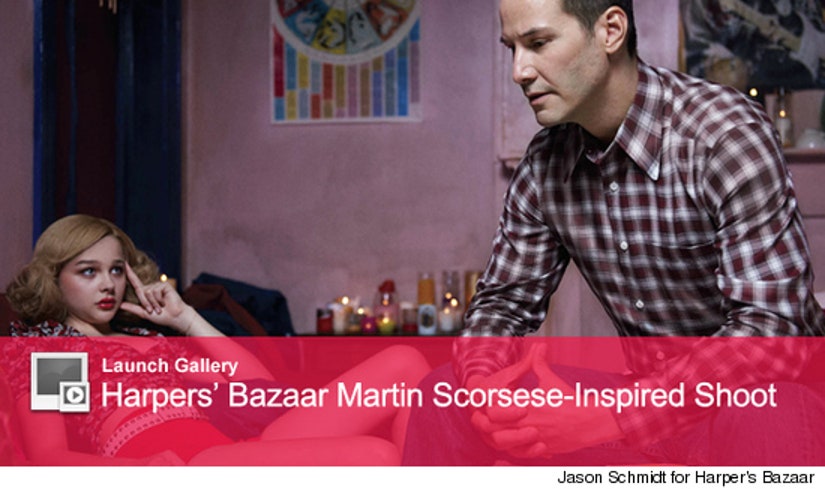 Scorsese's actors share their experiences in the full article, which you can read here.

"I met Marty a few years before I worked with him, in '82 in L.A. Then I was shooting 'Top Gun' and he offered me 'The Color of Money' to do with [Paul] Newman. When we started working together, Marty would just giggle. And it was wonderful because sometimes in the more violent scenes, like when I got pissed and was going down the stairs and throwing down the briefcase, you could just hear him giggle."

“When we were shooting 'Taxi Driver,' I think Marty was really uncomfortable with the fact that I was so young. The memory I have is of him and Robert De Niro trying to tell me how to unzip [De Niro's] pants. And Marty keeps bursting out laughing. He can't get a word out, and he tries to act serious, you know? He keeps smoothing down his face on both sides, but he just keeps laughing. And then De Niro decides he's going to take over because he can do it.”

"There's an aura about him," Moretz says. "He knows how to get that thing that makes it a Scorsese film; it's completely unspoken. But I haven't seen 'Taxi Driver' yet. My mom won't let me watch it."

What is your favorite Martin Scorsese film? Tell TooFab in the comments below!