Ok, Twi-hards. We know there are some of you who would give anything to run your fingers through Robert Pattinson's trademark hair.

Well, one woman got to do just that, day after day -- lead "Breaking Dawn" hairstylist Beatrice De Alba. Beatrice was responsible for creating and maintaining the hairstyles for most of the principal cast using the PRO Beauty Tools Twilight Limited Edition styling tools.

toofab talked exclusively with the Oscar-winning hairstylist about styling the likes of Robert, Ashley Green, Dakota Fanning, Kellan Lutz and many more. Read on as she dishes about the cast -- including why cutting Robert's hair was "nerve-racking" and learn how to win your own set of Twilight Limited Edition styling tools! 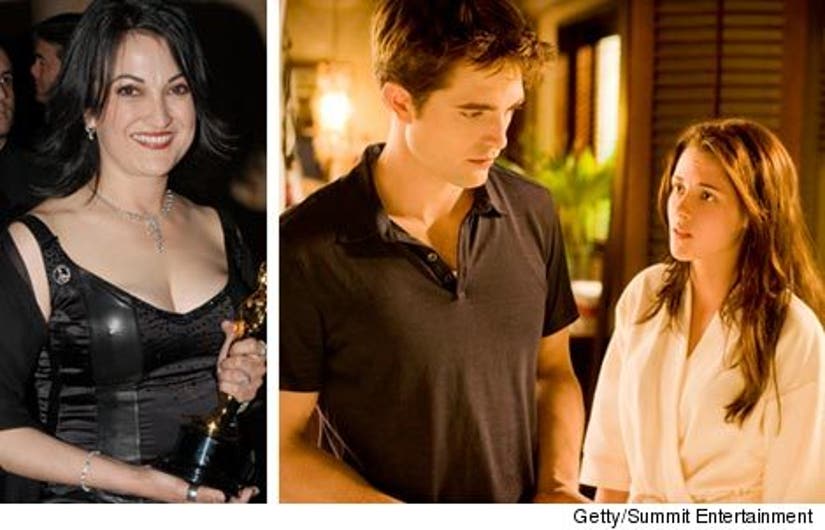 toofab: Who was your favorite "Breaking Dawn" character to style?

Beatrice: Wow, that's a tough one! Each character was my favorite as they were sitting in my chair! It's an amazing feeling to have an actor sit down and transform into their character as I do their hair or apply their wig. I must say though, Mackenzie Foy (Renesmee) was a little ray of sunshine every time she walked in the trailer and I loved doing her very long wig!

toofab: Whose style was the most challenging?

Beatrice: I try to not make anyone's hairstyle too complicated on any film because of the time constraints that we work under. The most challenging styles on "Breaking Dawn" were the lace-front wigs though. I am a perfectionist so I am really adamant about a wig never looking like a wig.

toofab: Who has the best hair on the cast?

Beatrice: So many of the cast members have amazing hair so it's really difficult to say who's is the best. Ironically, some of the most glorious heads of hair like Ashley's and Nikki's were underneath wigs!

toofab: Whose hair was the most damaged?

Beatrice: We had a color disaster with one of the Amazons in "Part 2." I just made sure that she had plenty of Davines shampoo and conditioner to use at the hotel and that her hair was slathered in Davines conditioner under her wig.

toofab: Was there a style that you tried that didn't quite work and you had to change?

Beatrice: All of the hairstyles that I designed had to be approved by the director, Bill Condon (love him!), and a LOT producers. Several of my designs had to be altered in some way. For example, I wanted to do Dakota Fanning's hair in an Edward Gorey-style bob with bangs and the producers felt it was too cute so I pulled it back in a more severe ponytail.

toofab: Ashley Greene's (Alice) hair has changed most from movie to movie. How did you settle upon the look?

Beatrice: Alice is described as a pixie in "Twilight." I really wanted to make that image come to life. After meeting with Ashley during prep, I Photoshopped a pixie hairstyle on her and sent it to the director, Bill, as he was scouting in Brazil. He liked it so I had a wig made that could be cut into that style. I actually cut the wig on Ashely's head. It was like sculpting and watching the Alice I pictured come to life!

toofab: Did Robert Pattinson call the shots on Edward's hair?

Beatrice: When Robert came in for his haircut it was a bit nerve-racking knowing that whatever I did it would probably be on the Web in a matter of hours [laughs]. As I started cutting he kept encouraging me to go shorter, which I loved because that was exactly what I had in mind! I wanted him to have a more mature look. I think we scared a few producers who thought the fans might have a different opinion!

Beatrice: Elizabeth has amazing hair. I wanted her to look sleek and elegant in this film. A great blow dry and loose waves were definitely the way to go!

toofab: Kellan Lutz (Emmett Cullen) changes his hair color all the time. Has that damaged his hair?

Beatrice: I had a wonderful colorist on staff and she used a demi permanent color on Kellan to avoid any damage to his hair. I wanted him to be a more natural looking brunette than he had been in the other films. I love the way it turned out!

toofab: How did you achieve Peter Facinelli's (Carlisle Cullen) color?

Beatrice: Well, thanks for the compliment, but Peter's hair was a wig! I love that you thought it was color! I chose darker, more dimensional blonde tones for his wig as I did with Nikki Reed's. My wig maker is amazing too which doesn't hurt!