News By TooFab Staff | December 8, 2011 4:47 PM
Spanx may be the body shapewear of choice for the Hollywood set, but across the pond in the U.K., women want booty.

The British beauty's bum has been the subject of envy (and many online searches) ever since she served as the maid of honor at her sister Kate's wedding to Prince William in April. Her custom Alexander McQueen silk gown hugged every one of her famous curves perfectly. 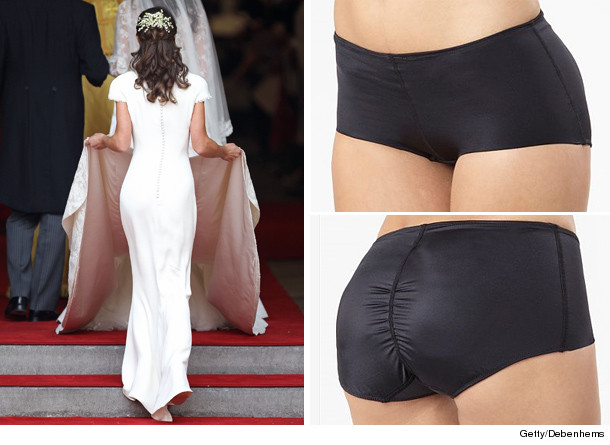 And while Pippa's backside is the result of a lot of hard work (she competes in triathlons), British women are hoping to achieve the same shape thanks to padded underpants. These special pants, called Invisible Shaping Bum Boosters, are on sale at U.K. department store Debenhams.

Made from the shaping material polyamide elastane, the padded lingerie reportedly adds two inches to the wearer's derriere. Debenhams spokeswoman Michelle Dowdall explained the public's fascination with achieving a Pippa-eseque behind. "Widely publicized photographs of Pippa's shapely behind have made 'bum envy' a part of everyday conversation for women all over the U.K.," she said.

Apparently, her words ring true. Five of the six bum booster sizes are already out of stock on the Debenhams website. The underwear is on sale for 18.50 pounds ($29.00). Unfortunately for envious Americans, they're only available in the U.K.

Why Kendall Jenner Needs to Be Beyonce's Personal Assistant

'The Bachelor Presents: Listen To Your Heart's Cast List Is A Lot To Take In Kylie Jenner's Shoutout To Travis Scott In Her New Instagram Is So Subtle Stassi Schroeder's Quotes About The 'Vanderpump Rules' Cast Predict Their Future