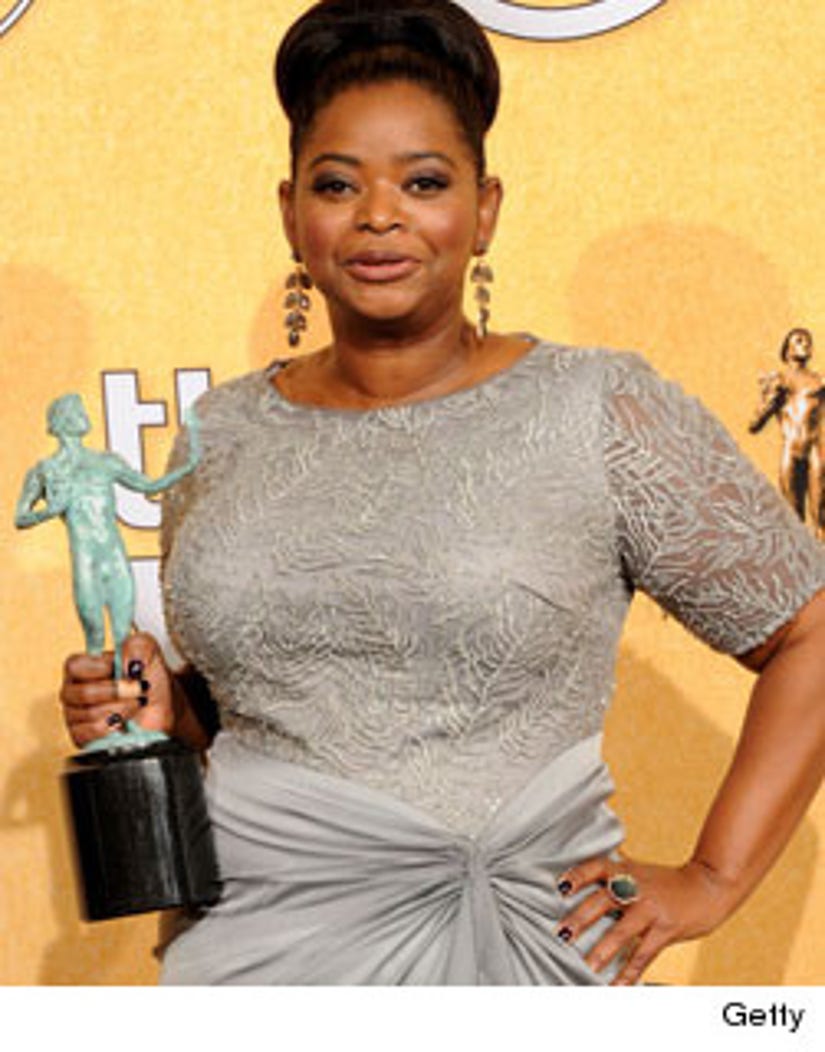 "The Help" also claimed the guild's ensemble award, the show's equivalent of a best-picture prize.

Davis and Spencer won as black maids going public with uneasy truths about their white employers in 1960s Mississippi.

Jean Dujardin won the lead-actor honor for "The Artist" as a silent-film superstar whose career crumbles when the sound era arrives. Christopher Plummer won for supporting actor as an elderly dad who comes out as gay in "Beginners."

The wins boost the actors' prospects for the same honors at the Feb. 26 Academy Awards.

Plummer would become the oldest actor ever to win an Oscar at age 82, two years older than Jessica Tandy when she won best actress for "Driving Miss Daisy."

Backstage, Plummer joked about whether he would like to win an Oscar, an honor so elusive during his esteemed 60-year career that he did not even receive his first Academy Award nomination until two years ago, for "The Last Station."

"No, I think it's frightfully boring," Plummer said. "That's an awful question. Listen, we don't go into this business preoccupied by awards. If we did, we wouldn't last five minutes."

Spencer, a veteran actress who had toiled in small TV and movie parts previously, had a breakout role in "The Help" as a brassy maid whose mouth continually gets her in trouble.

"I'm going to dedicate this to the downtrodden, the under-served, the underprivileged, overtaxed - whether emotionally, physically or financially," Spencer said.

On the television side, comedy series awards went to "Modern Family" for best ensemble; Alec Baldwin as best actor for "30 Rock"; and Betty White as best actress for "Hot in Cleveland."

"You can't name me, without naming those other wonderful women on 'Hot in Cleveland,'" the 90-year-old White said. "This nomination belongs to four of us. Please, please know that I'm dealing them right in with this. I'm not going to let them keep this, but I'll let them see it."

The TV drama show winners were: Jessica Lange as best actress for "American Horror Story"; and Steve Buscemi as best actor for "Boardwalk Empire," which also won the ensemble prize.

For TV movie or miniseries, Kate Winslet won as best actress for "Mildred Pierce," while Paul Giamatti was named best actor for "Too Big to Fail."

Before the official ceremony, the Screen Actors Guild presented its honor for best film stunt ensemble to "Harry Potter and the Deathly Hallows: Part 2." The TV stunt award went to "Game of Thrones."

The winners at the SAG ceremony typically go on to earn Oscars. All four acting recipients at SAG last year later took home Oscars - Colin Firth for "The King's Speech," Natalie Portman for "Black Swan" and Christian Bale and Melissa Leo for "The Fighter."

The same generally holds true for the weekend's other big Hollywood honors, the Directors Guild of America Awards, where Michel Hazanavicius won the feature-film prize Saturday for "The Artist." The Directors Guild winner has gone on to earn the best-director Oscar 57 times in the 63-year history of the union's awards show.

The guild's ensemble prize, considered the ceremony's equivalent of a best-picture honor, has a spotty record at predicting what will win the top award at the Oscars.

While "The King's Speech" won both honors a year ago, the SAG cast recipient has gone on to claim the top Oscar only eight times in the 16 years since the guild added the category.

Though "The Help" won the ensemble prize this time, "The Artist" and George Clooney's family drama "The Descendants" are considered stronger contenders for the best-picture Oscar.

Mary Tyler Moore received the guild's lifetime-achievement award, an honor presented to her by Dick Van Dyke, her co-star on the 1960s sit-com "The Dick Van Dyke Show."

SAG President Ken Howard put in a plug during the show for the guild's planned merger with another Hollywood union, the American Federation of Television and Radio Artists. The boards of both groups have approved the merger, and ballots will be sent to members of each union.

"As one union, SAG-AFTRA will support a future of great entertainment for all of us," Howard said.