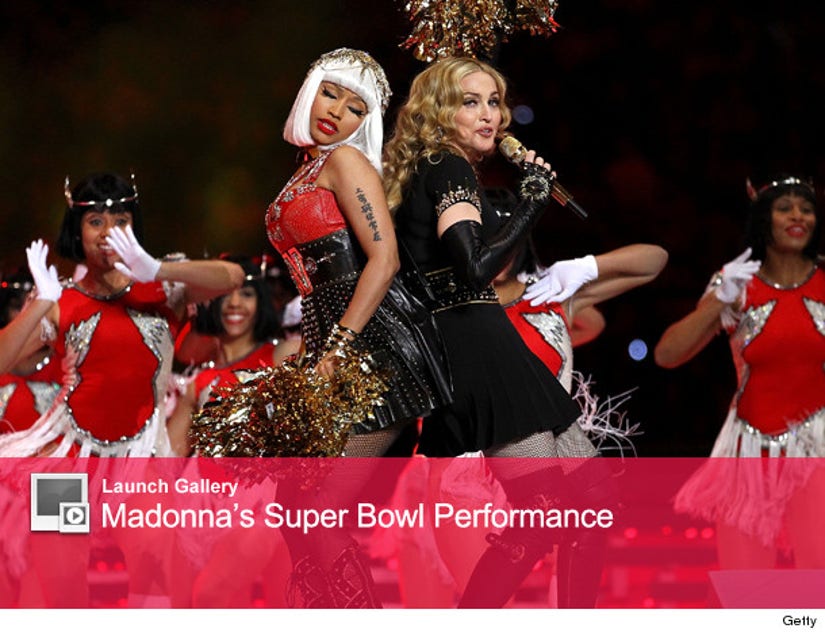 Madonna's halftime performance the the Super Bowl was one over the top extravaganza -- and it's got fans split down the middle!

While there's no doubt the production value was incredible as she tore through her hits including "Vogue," "Give Me All Your Luvin'" and "Like a Prayer," it's clear the 53-year-old wasn't singing live for most of the performance.

Having Nicki Minaj, M.I.A., Cee Lo Green and LMFAO join her on stage made for some fun and sometimes awkward moments as well.

So what do the stars think of Madge's performance? Well ... most of them loved it!

"Two quarters of SuperBowl and the strongest performer is Madonna," Alec Baldwin tweeted after she wrapped it up.

Kelly Osbourne added, "Nothing I have watching musically has made my heart pump with so much joy then Madonna's performance #thesuperbowl f**king amazing!"

"Jersey Shore" co-stars Deena Cortese and Snooki agreed, "I'll always be a Madonna fan.. Love her!" wrote Deena, with Snooks adding "That was the best half time show EVER!"

It wasn't all love though, as "Dancing with the Stars" pro Cheryl Burke tweeted "Wasn't impressed with Madonna at all! I expected more..."

Fan reviews on Twitter have been split as well -- and we want to know what you thought.