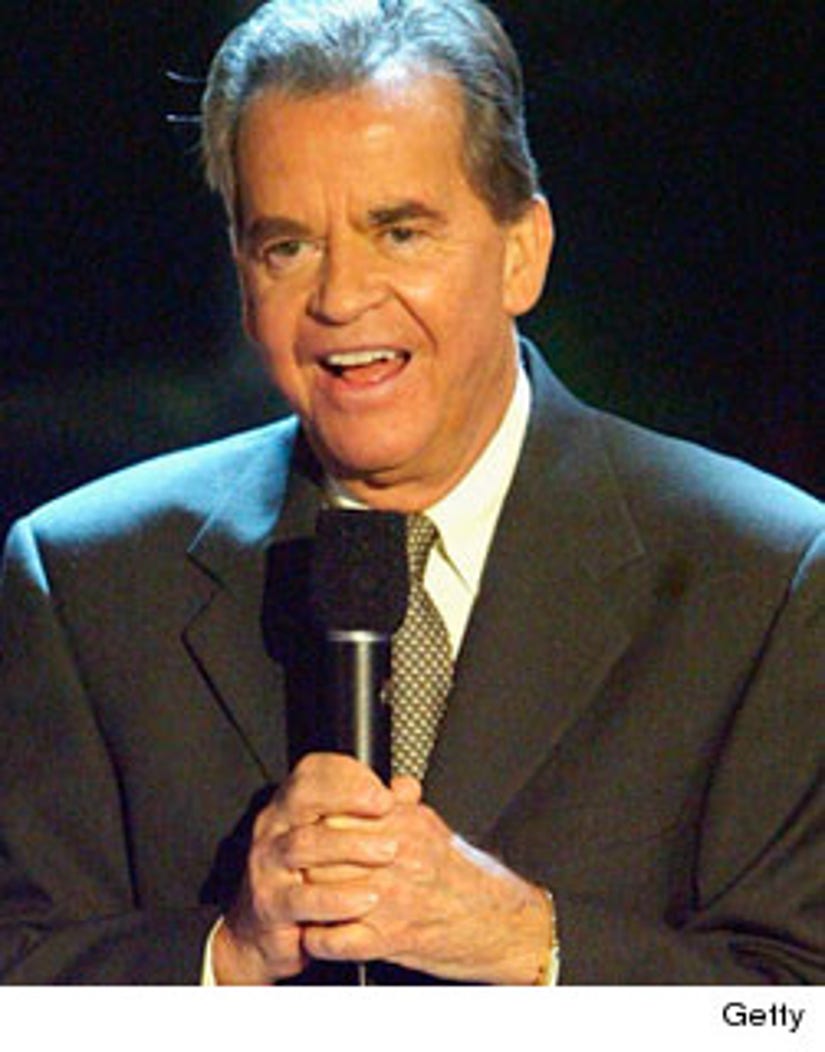 Hollywood icon Dick Clark passed away today at the age of 82.

Celebrities immediately took to Twitter to express their grief at the loss of such a legend.

Ryan Seacrest @RyanSeacrest
I am deeply saddened by the loss of my dear friend Dick Clark. He has truly been one of the greatest influences in my life.

Joan Rivers ‏ @Joan_Rivers
Very sad to hear about Dick Clark. What a great life. What a great career. Relevant until the end. He will be missed!

Snoop Dogg ‏ @SnoopDogg
REST IN PEACE to the DICK CLARK!! U were pioneer n a good man!! Thank u sir

Marie Osmond ‏ @marieosmond
In 1974, my first time on BandStand, I thought Dick Clark was the most handsome man in show business. In 1998, when he created and produced the Donny & Marie talk show, I realized that was truly the hardest working man in show biz. And, now in 2012, I will always remember him as one of the most honorable men in show business. Thank you, Dick, for every great way you encouraged me in my career. You are loved. https://www.facebook.com/photo.php?pid=23295954&l=4247d1dba3&id=311781435323

Anderson Cooper ‏ @andersoncooper
What a career Dick Clark had! What a life! My thoughts are with his family and friends.

Jonas Brothers ‏ @JonasBrothers
You'll continue to be an inspiration to us all Dick Clark. Thanks for the amazing rockin years you were with us. You'll truly be missed

Gloria Estefan ‏ @GloriaEstefan
You will never be forgotten... We love you, Dick Clark! May you find eternal peace & light... https://pic.twitter.com/3gPalwgs

HANSON ‏ @hansonmusic
Dick Clark was a Rock 'n' Roll Radio/TV icon with an influence on pop culture for more than 50 years. Rest in peace. -ISAAC

Rob Lowe ‏ @RobLowe
Had the pleasure to work with Dick Clark when I was 15. He was charming and kind; a true American icon that will live forever.

Brooke Burke @BrookeBurke
So sad to hear the tragic news. My thoughts & prayers go out to all who loved him.

Wendy Williams ‏ @WendyWilliams
Rest in Peace Dick Clark. You will be missed.

Denise Richards ‏ @DENISE_RICHARDS
My heart goes out to Dick Clark's family and loved ones.... we lost a legend.. #RIPDickClark

Matthew Morrison @Matt_Morrison
A sad day as we have lost Dick Clark, an American Icon. You will be missed.

Clint Black ‏ @Clint_Black
We've lost one of the greatest men in show biz. #Dick Clark will be remembered with the utmost admiration and affection.

Holly Robinson Peete ‏ @hollyrpeete
#RIP Dick Clark. Always so nice Employed me many times. I will miss you Dick. Prayers to Kari and the family #Legend

backstreetboys @backstreetboys
Our hearts go out 2 Dick Clark's family. The memories u've created will live forever & r experiences w/ u is something we will cherish 4 all r lives.

Fergie ‏ @Fergie
Dick Clark will be truly missed. We will carry on his legacy every New Year's Eve. https://pic.twitter.com/qbi9ub5C

Sean Hayes ‏ @theseanhayes
R.I.P. Dick Clark. Thanks for bringing music into our homes via TV and #AmericanBandstand.

Blake Shelton ‏ @blakeshelton
So proud I had the chance to shake hands with Dick Clark in my lifetime... Great man..

Harry Shum Jr ‏ @iharryshum
So sad to hear about Dick Clark's passing. New Years Eve won't be the same without him. An icon that will be missed.

Melissa Rivers ‏ @MelRivers
Sorry to hear about the passing of Dick Clark, he was truly a revolutionary in our business.

lisaling ‏ @lisaling
Rest in peace dear Dick Clark. A legend in entertainment and a truly lovely man. What an honor to have known you.

Trista Sutter @TristaSutter
I am so saddened to hear about Dick Clark. :( Was lucky to meet him on The Other Half days. Thoughts go to his family & friends

Wayne Brady @WayneBrady
RIP Dick Clark. Being able to do the New Year's special w him was an honor. A TV pioneer and extraordinary business man. God Bless.

Jill Zarin @Jill Zarin
I'm so sad to hear of the passing of Dick Clark. I loved American Bandstand and we will all miss him on New Years Eve RIP

Charlie Daniels @CharlieDaniels
The CDB regrets the loss of our friend Dick Clark who we had the honor of working with many times. Nobody did TV like Dick. Rest In Peace.

Marlee Matlin @MarleeMatlin
So sorry about passing of Dick Clark. A man with the gift of discovering talented musicians he also was a consummate producer/lovely man RIP

Times Square @TimesSquareNYC
We are absolutely heartbroken.One of our favorite people, and a Times Square New Year's Eve icon, Dick Clark has passed away at age 82. #SAD

Melissa Joan Hart @MellyJHart
Rest in Peace Dick Clark!! Thanks for entertaining my family for decades! New Years won't be the same ever again!

Chris Harrison @chrisbharrison
Just heard the sad news about the passing of Dick Clark. A legend in our game!

Kevin McHale @druidDUDE
Dick Clark, what a a legend. Changed TV & Music forever. You will be missed Mr. Clark!

Aaron Carter @AARONCARTER
#RIP #DickClark You will be missed.. Love, The Carter Family!

Heart @officialheart
Back in the 1960s the pop culture catchphrase was "Never trust anyone over 30". Dick Clark was trustworthy all the way home. Rock on Sir! AW

Gloria Estefan @GloriaEstefan
Our sincerest condolences to Dick Clark's wife, Kari, his family & all who loved & admired him which includes the whole Estefan clan!

Danny Bonaduce @thedoochman
You may remember Dick Clark as the world's oldest living teenager. I'll remember him as the man who beat me in a pushup contest - he was 74.

Cesar Millan ‏ @cesarmillan
My thoughts and prayers go out to the family of Dick Clark, a fellow dog lover and an entertainment legend.

Leonard Maltin ‏ @leonardmaltin
Rest in Peace Dick Clark. He was always incredibly nice to me. A real gentleman

Richard Roeper ‏ @richardroeper
Dick Clark's agent confirms the legendary broadcaster is dead at 82. RIP to a giant in his field.

Hayley from Paramore ‏ @yelyahwilliams
RIP Dick Clark. Will think of you every NYE.

Jenny McCarthy ‏ @JennyMcCarthy
RIP dick Clark. You were amazing to work with. U will be missed. Xxxoo

Shanna Moakler ‏ @ShannaMoakler
I will Miss you Dick Clark, It was a honor to be interviewed by you at #MissTeenUSA you will be so missed. xoxo https://say.ly/SPz36WP

Seth Green ‏ @SethGreen
So saddened by Dick Clark's passing- an innovator, a legend, a man who believed in the greatness of humans. #ThankYou

Dennis Haskins ‏ @mrbelding
Sad to pass along the passing of a true legend - Dick Clark. Can anyone else hear the American Bandstand theme? #legend

dave holmes ‏ @DaveHolmes
Worked with Dick Clark a few years back. Dude did it ALL: wrote cue cards, moved lights, called shots. An inspiration and a very nice guy.

"With 'American Bandstand,' he introduced decades' worth of viewers to the music of our times. He reshaped the television landscape forever as a creative and innovative producer. And, of course, for 40 years, we welcomed him into our homes to ring in the New Year. But more important than his groundbreaking achievements was the way he made us feel -- as young and vibrant and optimistic as he was. As we say a final 'so long' to Dick Clark, America's oldest teenager, our thoughts and prayers are with his family and friends -- which number far more than he knew."

Share your own memories of Dick Clark in the comments section below.