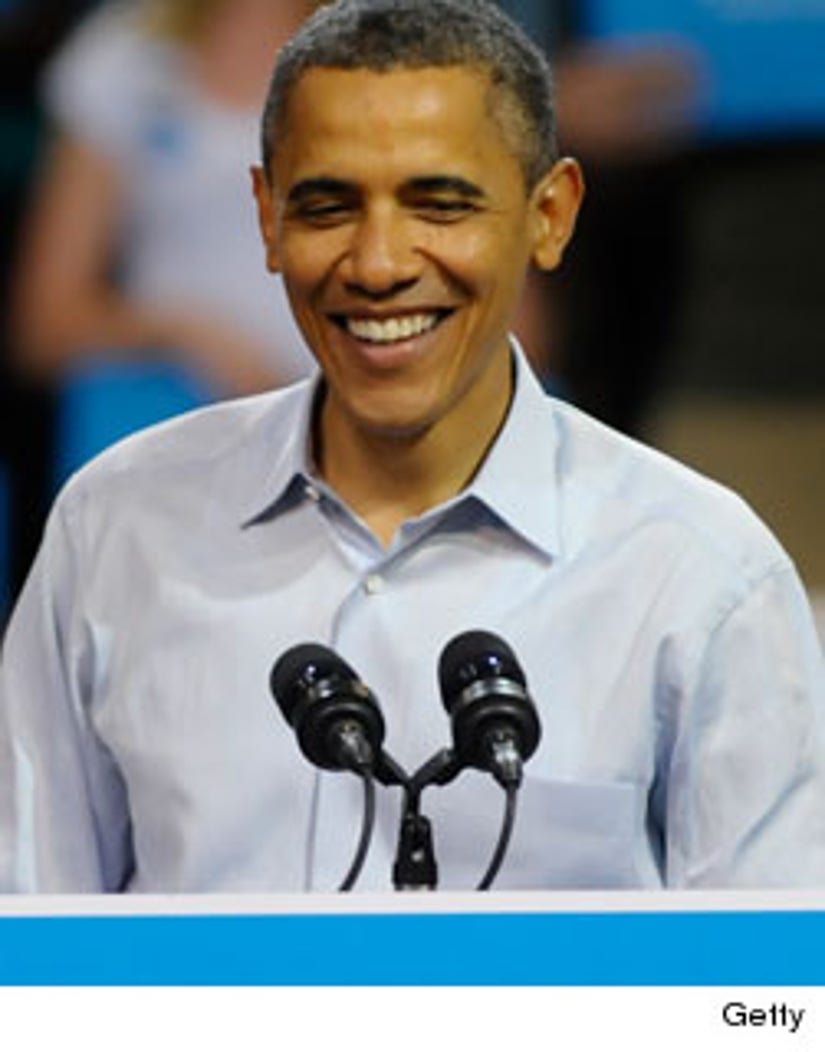 President Obama stunned the nation today by announcing that he supports gay marriage.

"I've just concluded that for me personally it is important for me to go ahead and affirm that I think same sex couples should be able to get married," the President told ABC anchor Robin Roberts in an interview that is scheduled to air on “Good Morning America” Thursday morning, with excerpts airing tonight on ABC's “World News with Diane Sawyer.”

This is the first time in history that a U.S. President has come out in support of the controversial topic.

Celebrities immediately took to Twitter to react to the groundbreaking news.

Jane Lynch ‏ @janemarielynch - "Obama: Marriage? Gay is okay!" "Pretty darn happy today. Thanks Mr President, for supporting the dignity of my family and so many others!"

Ricky Martin @ricky_martin - "I applaud President @barackobama for affirming that ALL Americans should enjoy equal rights. Historic! I will be a very proud host on Monday"

Justin Timberlake ‏ @jtimberlake - "@barackobama inspires me once again. True leadership is when you are willing to risk your power and voice so that ALL of ours can be heard."

Kim Kardashian ‏ @KimKardashian - "Thank you, President Obama! No more living in the past!"
She added on her website: "Wow… I just heard that President Obama has officially announced that he supports gay marriage!! This is such a huge step forward in our country's fight for civil rights and I hope that today this will give hope to so many young people across the country.

We've never had a president so supportive of the lesbian, gay, bisexual and transgender community and today I am proud to be an American!! I'm so happy that our country is making history and moving forward. No more living in the past!"

Eva Longoria ‏ @EvaLongoria - "This is an incredible day in the history of civil rights in America. I applaud President @BarackObama and all he has done for LGBT Americans. #Equality"

Adam Levine @adamlevine - "thank you @BarackObama for reminding us all that true leadership is not dead."

Dianna Agron @DiannaAgron - "Open our hearts & minds! Proud of Obama for speaking up." "Love is love."

MichelleTrachtenberg ‏ @RealMichelleT - "Proud to have a President who supports Equality. #Obama"

Russell Simmons @UncleRUSH - "thank you Mr. President for your support of gay marriage..."

Chely Wright @Chely Wright - "The President has just stated publicly that he believes 'same sex marriage should be legal'. I am proud. Thank you @BarackObama"

George Takei ‏ @GeorgeTakei - "A day after NC's shame, President Obama does the right thing. Read my response at That Blog Is So Takei."

Sarah McLachlan ‏ @SarahMcLachlan - "I love Obama and today I love him even more for his strong statement in support of same sex marriage........."

Taye Diggs ‏ @TayeDiggs - "I'm very proud to have a president who is vocally in support of same sex marriage. Today marks a watershed moment in American History."

Suze Orman ‏ @SuzeOrmanShow - "I am soooo PROUD of you PRESIDENT OBAMA YES YES YES it is about time. Marriage Equality is so very very important."

Audra McDonald ‏ @AudraEqualityMc - "YEEEEEESSSSSSSSSSS!!!!!!! Thank you Mr President." "How many young lives did the President just save by saying that he supports them today? #Equality"

devon sawa ‏ @DevonESawa - "I've got a lot of respect for the President."

stuart townsend ‏ @Stu_Townsend - "sad that same-sex marriage is only now being endorsed by Obama, but at least it's a start,makes me wonder which century I'm in. love is love"

Anthony Rapp ‏ @albinokid - "So happy to see Obama do the right thing (and take a big political risk) by saying same sex marriage should be legal. Yay 4 #courageandsense"