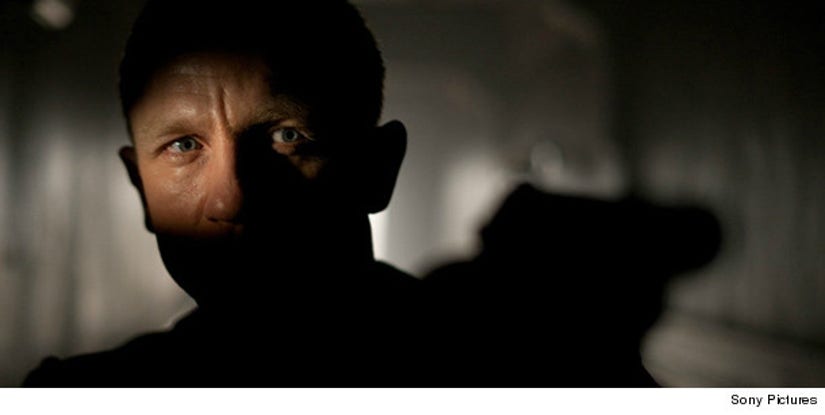 Adding in $2.2 million from Thursday night previews at IMAX and other large-format theaters, "Skyfall" has taken in $90 million domestically, according to studio estimates Sunday.

That lifts the worldwide total for "Skyfall" to $518.6 million since it began rolling out overseas in late October. Internationally, the 23rd Bond flick added $89 million this weekend to raise its overseas revenue to $428.6 million.

"Skyfall" already has passed the $407.7 million overseas total for "Quantum of Solace" and by Monday, it will top the $432.2 million international haul for "Casino Royale."

The Craig era has reinvigorated one of Hollywood's most-enduring franchises, whose first big-screen Bond adventure, "Dr. No," debuted 50 years ago.

"It's quite a testament to Bond, considering it's the 50th anniversary. What a great anniversary present," said Rory Bruer, head of distribution at Sony, which produces the Bond films along with MGM.

"Lincoln" centers on the months leading up to the president's assassination in April 1865, as he maneuvers to pass the 13th amendment abolishing slavery and end the Civil War. Distributor Disney will expand "Lincoln" into nationwide release of about 1,600 theaters Friday and may widen the film further over Thanksgiving week.

"The performances are some of the greatest of recent time," said Dave Hollis, head of distribution for Disney. "I don't know if you're ever going to think about it again without seeing our actor as Lincoln. Daniel is extraordinary in the role."

"Skyfall" took over the top spot at the weekend box office from Disney's animated comedy "Wreck-It Ralph," which fell to No. 2 with $33.1 million, raising its domestic total to $93.7 million.

While "Skyfall" marked a new high for Bond's opening-weekend revenue, the film has a long way to go to match the biggest audiences 007 has ever drawn. Adjusted for inflation, Sean Connery's 1965 Bond adventure "Thunderball" would have taken in an estimated $508 million domestically in today's dollars, with its 1964 predecessor "Goldfinger" not far behind at $444 million, according to box-office tracker Hollywood.com.

The Bond films over the last two decades have come in around the $200 million range domestically in inflation-adjusted dollars.

Still, Craig's Bond is setting a new critical standard for the franchise. While "Quantum of Solace" had a so-so critical reception, "Skyfall" and "Casino Royale" are among the best-reviewed Bond films, with critics and fans enjoying the darker edge Craig has imprinted on 007.

"'Skyfall' is to the Bond franchise what 'The Dark Knight' was to the Batman franchise," said Hollywood.com analyst Paul Dergarabedian. "By taking it to a whole other level, this is a different kind of Bond that can be taken really seriously."

Directed by Sam Mendes, the Academy Award-winning filmmaker behind "American Beauty" and Craig's director on "Road to Perdition," "Skyfall" continues the current franchise's exploration into the emotional traumas that have shaped Bond's cool, aloof manner.

The film reveals secrets out of the past of Bond's boss, British spymaster M (Judi Dench), and pits 007 against a brilliant but unstable former agent (Javier Bardem) who's out for revenge.

Hollywood remains on a brisk pace this fall as the busy holiday season approaches. Overall domestic revenues totaled $172 million, up 26 percent from the same weekend last year, when "Immortals" led with $32.2 million.