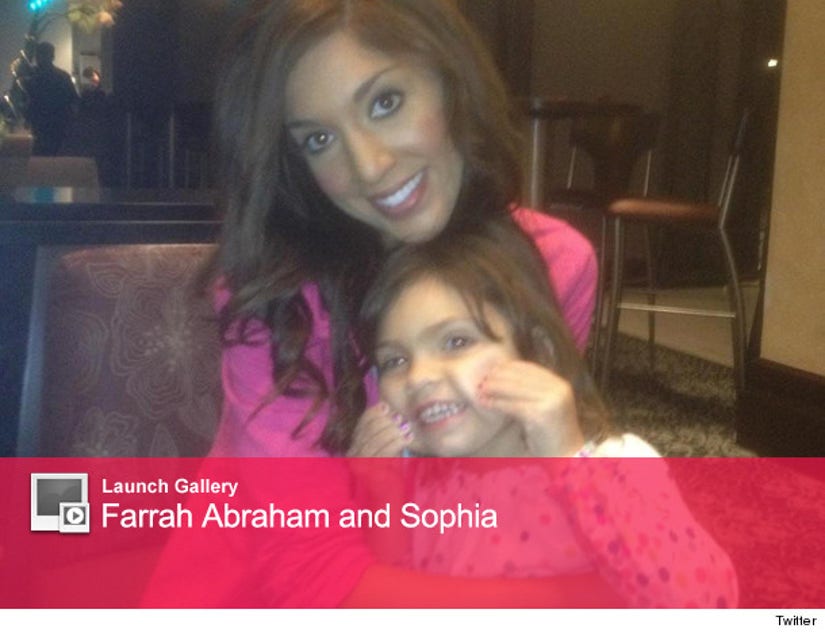 These "Teen Mom" stars need to step away from their computers -- with another one facing major backlash for something she posted online.

This time around it's Farrah Abraham facing the wrath of the Internet after a blog post where she describes trying to wax her 3-year-old daughter's unibrow.

"So here I am faced with a standout historical moment in motherhood when I can confirm to myself that my little, adorable,most cuddle-able cutie, baby girl has a Unibrow," she writes of daughter Sophia on her Sulia blog.

"I felt bad for her so I told sophia of the little issue on her brow, and I showed her how I waxed mine off, so I tryed [sic] to wax her," Farrah continues.

But it didn't go as planned.

"the second a dab hit the Uni, she touch it with the towel she had in her hand. UHHH so now, wax was in the towel, and I yanked it back ASAP, but fuzz was not stuck to the wax stuck to her Uni," Abrams writes. "OMG moment, So now sophia was freaking out, so I had to act like it was a cool science project to get the wax off."

With waxing clearly not an option, Farrah then found an alternative way to remove the "fuzz": Tweeze it off while her daughter was sleeping.

"I got my tweezers and Pluck-pluck-pluck," says Abrahms. "The next morning I showed her and told her how well she did and she didn't even know, She was more intrigued now to be ok with upkeeping her non-unibrow. I could tell she was proud."

And Farrah's proud too -- finishing her tale by saying "Ah I feel like a good mom:)"

"Is this a joke? You attempted to wax your THREE YEAR OLD'S unibrow?! And then proceeded to tweeze it? Wow. Now that is parenting at its finest," wrote one.

"You are teaching a three year old that there is something wrong with her. You should be raising up your child's self esteem not beating it down, she will have enough people in her life do that," posted another.

What do you think of Farrah's behavior? Keep in mind this is the same girl that recently had $16,000 worth of plastic surgery on her face and a boob job in 2010.