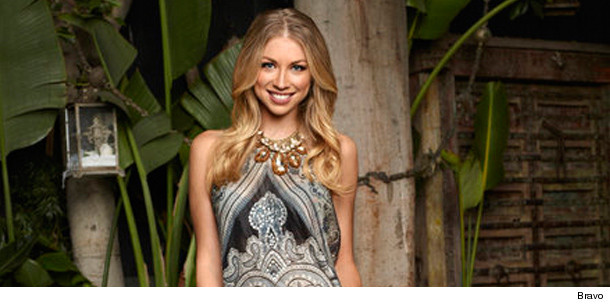 It shouldn't surprise you that a Bravo reality star has undergone plastic surgery, but Stassi Schroeder underwent her procedure right out of high school!

The "Vanderpump Rules" star and SUR staffer revealed that she got a chin implant as a graduation gift from her parents. After listening to her parents go on and on about her teenage years, we're not surprised she had esteem issues and got the implant. See the before and after, below:

These are the same parents who signed up her family for "The Amazing Race" a few years ago.

Here are three other things we learned in last night's episode.

1. Stassi's ex Jax Taylor and his rebound Laura-Leigh had sex (or simulated it) in the bathroom at Takami. We're not eating at that restaurant anymore. They denied doing the deed at SUR though, otherwise (51%) owner Lisa Vanderpump would have their hides.

2. After humiliating a customer, Frank was fired. Of course, toofab learned that happened a couple weeks ago.

3. Frank not only lost his job, but also Stassi. The two broke up in a spontaneous fight (although at least two camera crews captured the action).

Next week, Jax apologizes to Stassi. Do you think the two will get back together? I think it's a "SUR" thing.

To see even more Bravolebrities who went under the knife, check out the gallery below:

The 6 Best Desk Organizers Here’s How To Apply To Be On ‘Love Is Blind’ Season 2, Because Casting Has Begun Chrissy Teigen’s Tweets About ‘Animal Crossing: New Horizons’ Are A Full Mood

Actress Patricia Bosworth dead at 86 due to coronavirus Zac Efron admits he never wants to get in 'Baywatch' shape ever again: 'It's just stupid' Princess Margaret’s Lady-in-Waiting says wartime efforts made royals 'tough' amid the coronavirus pandemic