Couldn't sit through the 3-hour Oscars telecast? Check out the 5 can't-miss moments below, including the shocking moment Jennifer Lawrence tripped and fell on her way to the stage!

One of the buzziest moments of the show occurred before the Oscars telecast, when Ryan Seacrest dissed former Oscar winner and current presenter Catherine Zeta-Jones on the red carpet. Catherine volunteered to show off her nails on E!'s mani-cam, but was met with Ryan's back and awkward silence instead.

We knew Channing had the stripper moves, but who knew he's skilled in ballroom, too? And check out the toe-point on Charlize! Too bad she'd never slum and do "Dancing with the Stars!" Seth Macfarlane has a pretty nice voice too!

This year's Oscars had a musical theme, so there were bound to be numbers from the biggest movie musicals. After showstopping numbers from Catherine Zeta-Jones and Jennifer Hudson (reprising their hits from "Chicago" and "Dreamgirls," respectively), the cast of "Les Mis" took the stage. Stage stars Hugh Jackman, Aaron Tveit and Samantha Barks were fantastic, Russell Crowe ... not so much. Keep an ear for that off-key note at the end.

Seth MacFarlane was funny in his first-time hosting, but his funniest bit was playing the foul-mouthed teddy bear Ted.

"Silver Linings Playbook" star Jennifer Lawrence tripped on her way to the stage, eliciting gasps from the audience. But she played it off in her acceptance speech though.

Kristin Chenoweth and Seth MacFarlane closed the show with a song dedicated to the losers. Was it a little mean-spirited? Yes. But it was also hilarious.

Miss the red carpet? Check out all the photos below -- who was your favorite? 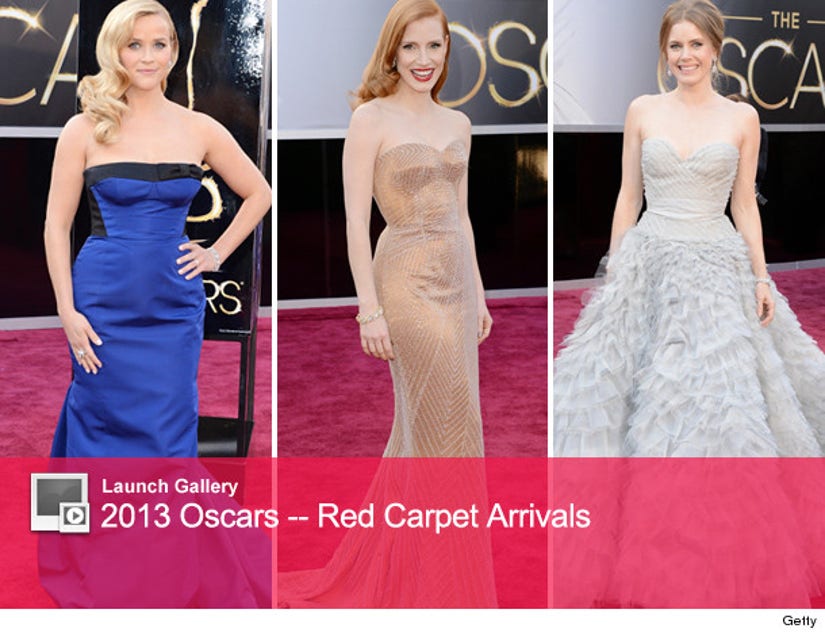