It's no secret that the "American Idol" producers would like a female winner this year, and this year's Top 10 girls are among the most talented singers we've seen in the show's history.

They performed for America's vote last night, and while some stepped up, others favorites faltered. Here's a quick rundown on their performances (and if you just want to see amazing singing, watch #6, 7, 8 and 10 -- which left judge Nicki Minaj without words).

With her rousing performance last week, Zoanette was a good pick to open the show. Wearing a brand new wig, she took on Tina Turner's "What's Love Got to Do With It." Her general appearance was sloppy, and so was her performance. She was off-key, flubbed lyrics and at points her voiced sounded ... phlegmy. I love her big voice and personality, but they might not be enough to carry her through:

Breanna has a great commercial look and voice, but her cover of Beyonce's "Flaws and All" came across as really safe and sedate, especially after Zoanette. She was better last week. Did Bre play it too safe?

Aubrey is stunning and always looks amazing. Thankfully, she turned up the excitement in her performance this week and Fergie's "Big Girls Don't Cry" was a good choice for her. She doesn't project like say, Zoanette or Candice, but I think this was solid enough for a real shot in the Top 10.

The first of the night's country singers, Janelle covered a male artist -- Elvis Presley's "If I Can Dream." This was a much better song choice than last week, showing off her range. I love the sweetness in her voice, and "Idol's" powerful country voting base will too. She definitely redeemed herself this week after her disappointing previous performance.

Tenna's another one who redeemed herself this week. Per Nicki Minaj's advice, she changed her hair and looked much younger. She has a more R&B voice, and did a nice interpretation of Faith Hill's "Lost." In my opinion, her vocal was better than Breanna's and Aubrey's, but can she compete with the pretty teens?

For some reason, Angela decided to change her name to Angie. She made an unusual choice: taking the piano and singing Colton Dixon's song "Never Gone." I love her voice and her singer songwriter vibe, but I feel she'll have to perform better-known songs as she progresses, because she's a shoo-in for the top 10. Win the competition first, then you can pen your own album.

It's no secret that I'm a huge fan of Amber. She tackled a tough song effortlessly -- Whitney Houston's "I Believe In You and Me." Vocally, she was pretty near flawless and her quiet confidence really came through tonight. My only fear is that she's gotten little air-time this season compared to Angie, Janelle and Candice. She is really special (the judges gave her a standing ovation), but America might not see it. If she doesn't make the top 10, hopefully she'll land one of the rumored wildcard spots.

The evening's second country girl and the second Faith Hill cover of the night. She really is a woman among all these girls, singing "Stronger" well ... stronger than everyone else. There's something so honest, so genuine about her performance. Like Mariah Carey said, she's ready to record an album. Will America send through two country girls?

Pretty girl, and pretty forgettable, unfortunately. Adriana picked Destiny's Child's "Stand Up For Love" but will she stand out? The vocal was actually not bad (she managed to correct that final big note again), but it definitely felt pageanty, as Randy Jackson said.

Candice has been consistently good all season, and the producers definitely saved one of the best for last. Her cover of John Legend's "Ordinary People" showed off a soulful, flirty side of Candice. She and Amber are hands down the best singers in the competition. Nicki was simply speechless after this amazing song.

The girls definitely brought it, and it'll be interesting to see who makes it through.

I think standouts Angie, Kree and Candice are locks, with Janelle and Amber having a really good shot. One or both of Breanna and Aubrey might make it in, and unfortunately it's probably the end for Tenna and Adriana. Zoanette, while entertaining, probably sang for the last time too, unless voters purposefully put her through like Sanjaya.

Who did you like? Tell toofab in the comments below! 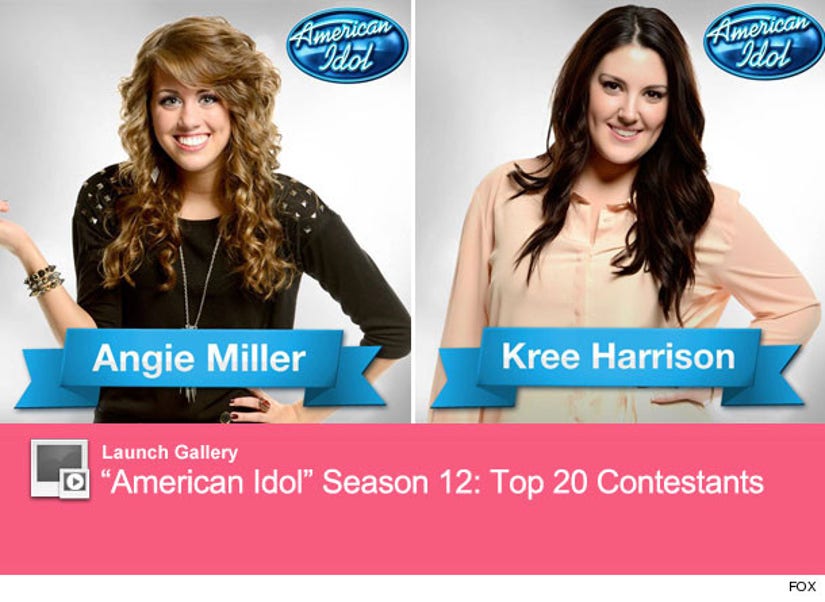