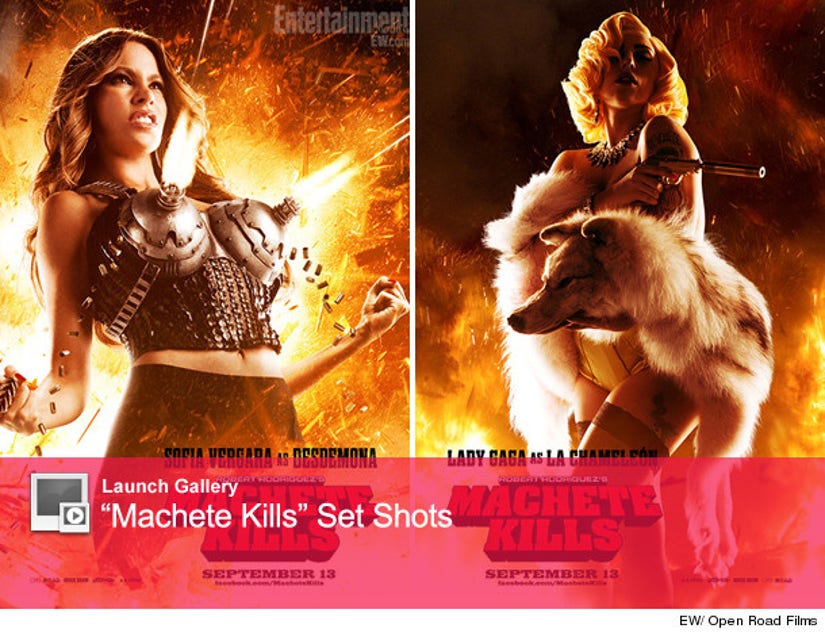 Well. That's a way to leave a lasting impression.

Entertainment Weekly just released the Sofia Vergara poster for the upcoming Robert Rodriguez action flick "Machete Kills" ... where she's definitely making the most of her assets!

The sexy Colombian stars as femme fatale Lady Desdemona in the sequel to 2010's "Machete," with director Rodriguez quick to sing her praises: “It was a whirlwind. She was willing to do anything and everything. She became this character. It was great fun for everybody.”

With that crazy gun contraption on her chest? Fun for everybody, indeed!

The story once again follows Machete Cortez (Danny Trejo), an anti-hero who is recruited by the President (Charlie Sheen ... yes, you read that right) to take down a Mexican arms dealer. Lady Gaga (above right), Jessica Alba, Mel Gibson, Vanessa Hudgens, Michelle Rodriguez, Amber Heard, Alexa Vega and more fill out the hodge-podge of a cast.

You have to wait until September 13 to see the flick in theaters, but click "Launch Gallery" above to see the full posters and more shots from the set.