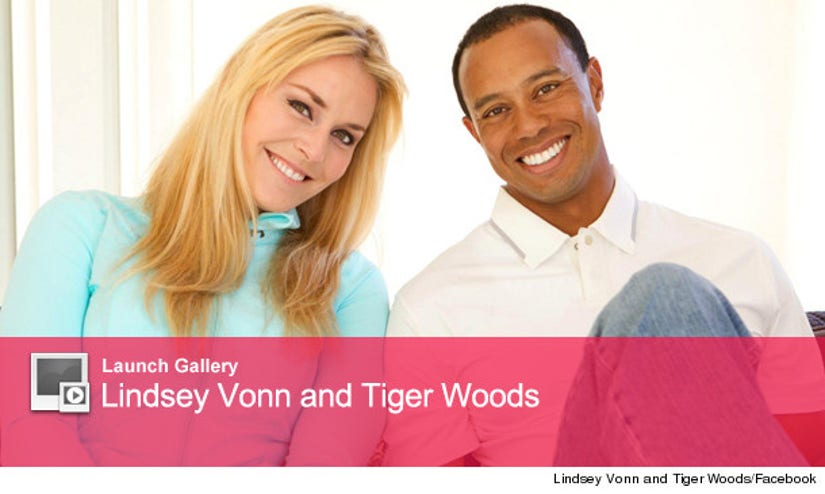 The alpine skiier and her golfer beau both posted photos (click above to see more) on their Facebook pages this morning, each with statements calling for privacy.

Tiger wrote: This season has been great so far and I'm happy with my wins at Torrey and Doral. Something nice that's happened off the course was meeting Lindsey Vonn. Lindsey and I have been friends for some time, but over the last few months we have become very close and are now dating. We thank you for your support and for respecting our privacy. We want to continue our relationship, privately, as an ordinary couple and continue to compete as athletes.

Lindsey was less formal, writing: I guess it wasn't a well-kept secret but yes, I am dating Tiger Woods. Our relationship evolved from a friendship into something more over these past few months and it has made me very happy. I don't plan on addressing this further as I would like to keep that part of my life between us, my family and close friends. Thank you for understanding and your continued support! xo LV

The most unusual part of these posts? Their engagement-esque look. If you're only dating, what is up with the professional, cutesy couple shots? And it's no coincidence Lindsay and Tiger are wearing the brands they endorse (Under Armour and Nike, respectively).

Tiger famously divorced Elin Nordegren (another pretty blonde) in 2010 after admitting to infidelity. Over a dozen women claimed they had affairs with the golfer. Lindsey finalized her divorce with her husband, Thomas Vonn, last January.

Rumors of Tiger and Lindsey's relationship surfaced earlier this year. He was spotted attending her World Cup Race in Austria, where she had a frightening crash during a run. She reportedly left Austria in his private plane and he's been by her side during the rehabilitation process.

Would you date (the very rich) Tiger Woods given his history?