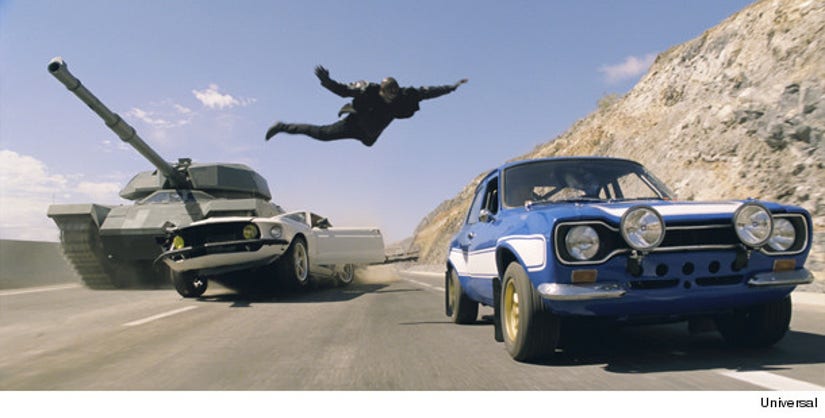 "Fast and Furious 6" proves it's all fun and games until someone gets a tank ... and then it's awesome!

The high-octane flick hits theaters this weekend, bringing the series over-the-edge of ridiculousness with killer girl fights, characters returning from the dead and, yes, the aforementioned war machine.

And while some franchises would be running on empty by the time #6 comes around, this may be the most exciting one yet.

Though they all made out like millionaire Robin Hoods at the end of "Fast Five," Dom Torretto (Vin Diesel) and his crew are brought back into the seedy racing underworld to help Agent Hobbs (The Rock) stop international terrorist Owen Shaw (Luke Evans).

If they succeed in taking him down, they'll be granted full immunity for their crimes in the previous films.

Also luring the gang back: A photo of the presumed-dead Letty (Michelle Rodriguez) working with Shaw. 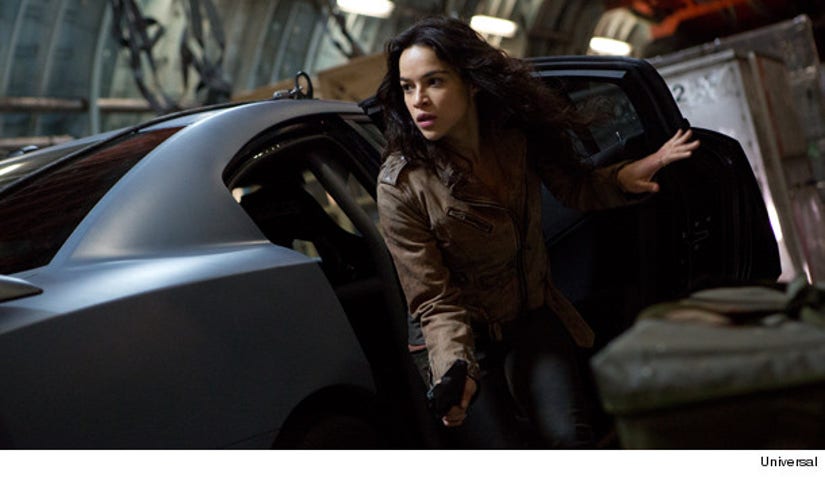 The return of Rodriguez is a welcome one -- and seeing her go fist-to-face against MMA fighter-turned-actress Gina Carano is one of the highlights of the movie. Their two fight scenes are epic, especially the one through a crowded train platform in London.

Carano, who made her big-screen debut in "Haywire," is still stiff when it comes to delivering her lines. But this time, she's not alone.

Many of Diesel's dramatic scenes with Rodriguez are laughable, partly due to the Velveeta cheese lines he's spewing and partly because of his delivery.

Thankfully, The Rock is charismatic as ever, Tyrese Gibson and Ludacris provide comic relief, the romance between Gal Gadot and Sung Kang's characters is sweet and Paul Walker is still oh-so-pretty.

But this movie is all about the action. And there's plenty of it.

Planes explode, a tank absolutely crushes everything in sight and the film's stars soar across the screen, gravity be damned!

This is the very definition of the summer popcorn flick and it should be interesting to see how it fares against "The Hangover Part III," which also skews strongly male. (Read our review for that here.)

Be sure to stick around after the credits start rolling, as a mid-credits scene links the movie to "The Fast and the Furious: Tokyo Drift" and introduces the bad guy for the already-announced #7.