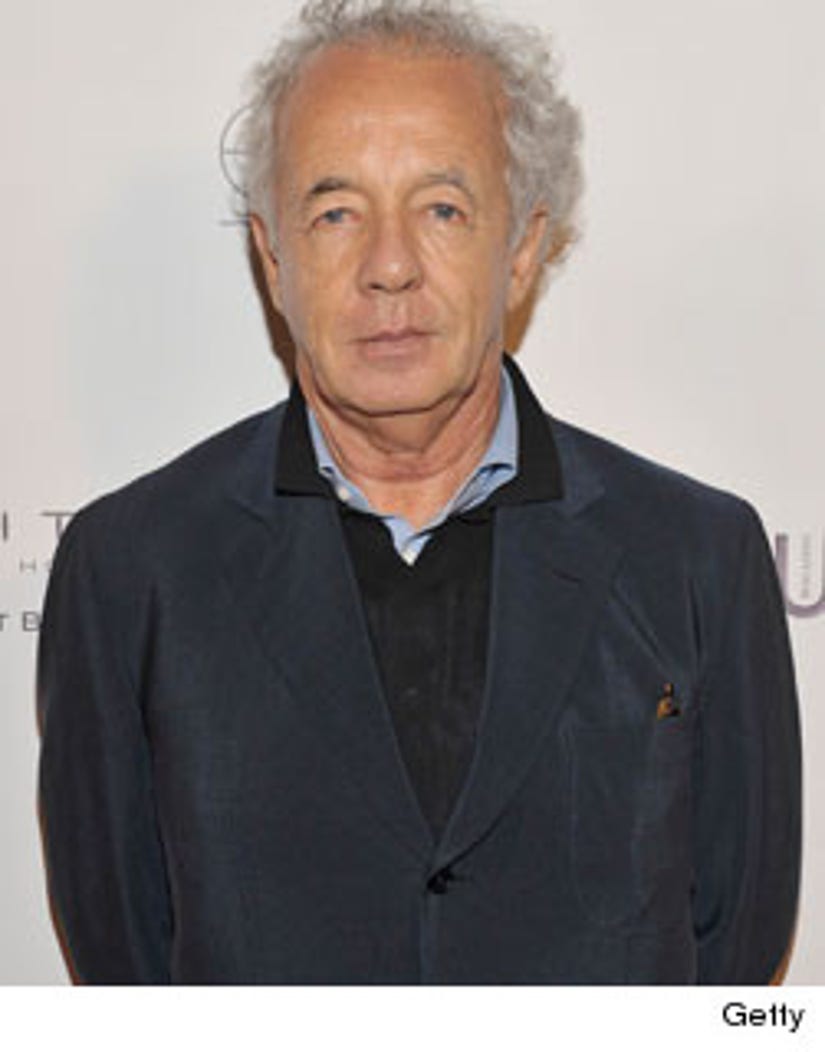 Gilles Bensimon has photographed the most famous women in the world, from supermodels to superstars.

"Elles" will be on display at the Sofitel Los Angeles from now until December. toofab's Lawrence Yee caught up with the French photographer at the opening sponsored by GENLUX, where he talked exclusively about his famous subjects, "America's Next Top Model," and what's in his future.

toofab: What does it mean to have "Elles" culminating here in Los Angeles?

Gilles: It's a place that I've spent a lot of time. I have a fascination with L.A. It's not surprising because the pictures that I chose were pictures of personalities, actresses, singers. A lot of these photos were shot in L.A.

toofab: Of these 25 photographs, which are your favorites?

Gilles: It's always when people disappear when you realize that the pictures have value. If you have someone in your family who's passed away and you find one of these pictures, it brings memories. That's why photography is important to me. These moments will never come back. With Audrey Hepburn, I think she was in her fifties. This was one of the few photo shoots she was doing. When I lost the negatives for about 20 years, I realized how precious they are.

toofab: Tell me about Beyonce.

toofab: Tell me about Mariah Carey. She's known for her glamour and dresses, and you captured her in blue jeans! Was she a diva?

Gilles: It was not a good day for her. If I remember -- and you have to take care with memories -- she was not so confident. The clothes were not fitting. The stylist did not realize she was not a model. At this point we got this moment. I shot something to make her feel better about herself. Because when you start to try clothes and nothing fits you, you feel terrible. 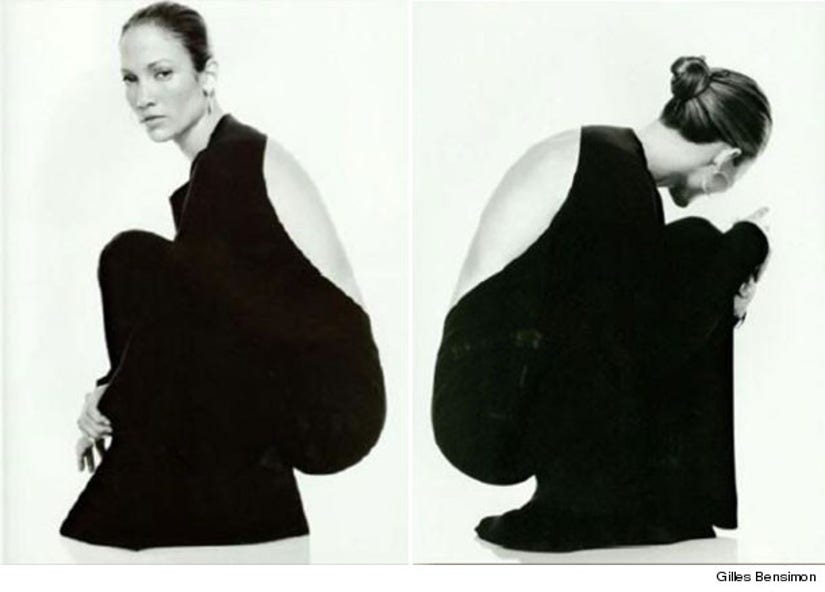 toofab: You had a great quote about Jennifer Lopez: "She is a fighter, a real force de la nature..." What do you remember from this shoot?

Gilles: I was impressed. She's Puerto Rican. Now it's great to be Puerto Rican, but it wasn't always the case. And she fought, dancing, acting, trying everything.

We tried to make something different. I love the way she starts to laugh [in the back portrait]. The air was very good for her. I like her very much. 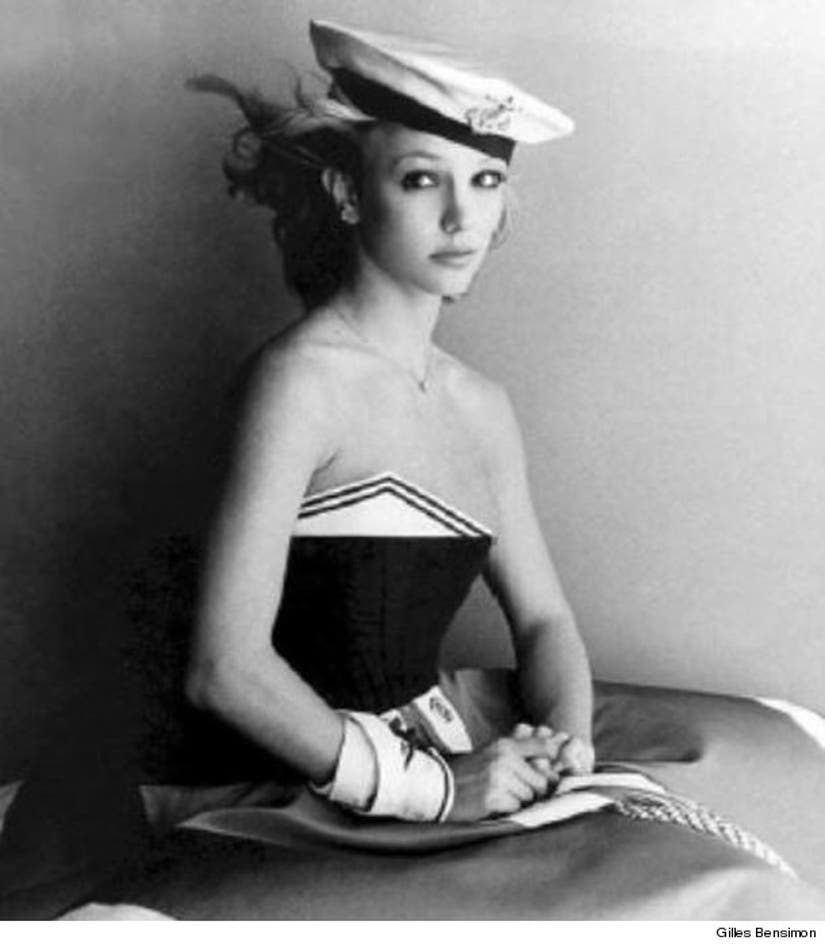 toofab: We have to ask you about Britney Spears, who you shoot back in 2000. You said, "She's an angel and perhaps still is a little girl."

Gilles: At this time she was still with her parents. She arrived on a flight and was exhausted. We were shooting couture. It was forever because we had 15 shoots. I told her mother, "she must be tired." And she said, "No, no, she's going to do it." The clothes came from Paris. I don't think Britney was couture, but I played the game.

I think she was a performer. She was never a teenager. I don't think she had time to be a teenager. And after that, I don't blame her to enjoy life a little more.

toofab: What do you think of her now? She had some very publicized difficult years.

Gilles: I think the press abused her. She was an easy target. The one who passed away from England ... Amy Winehouse. I remember when I saw the picture when she was drunk and out of control, the photographer chasing her. It was a shame. She was a fantastic singer. I never judge what people do.

toofab: Is there anybody -- dead or alive -- that you would have loved to shoot?

Gilles: I would say Mother Teresa. And Michelle Obama. It's not always about the look. It's about the way the people are.

toofab: A lot of people know you from "America's Next Top Model." You photographed the winners in the early seasons. What do you think of the show? Some criticize if for not producing supermodels.

Gilles: I think it's a show. It's about people competing. Do they reach their dream? I dont know. But that's not really the point. The point is to compete. It's like "Dancing With The Stars." They're not dancers really. But for one moment they're something.

toofab: Do you recall any of the winners you photographed?

Gilles: [Shakes his head no] Tyra asked me to do it in the beginning. I didn't really want to be on the show. But I liked the idea, and she's become a huge success, an incredible success.

toofab: Do you still talk to Tyra?

Gilles: We're suppposed to have dinner soon but we always postpone. I'm traveling a lot and she's very busy. But I still remember when she arrived as a kid in Paris. She was so beautiful. Still beautiful. And successful, which I think is amazing.

toofab: Do you think you'll retire?

Gilles: I'm not going to retire. Because I can't. I've been divorced too many times to not be obliged to constantly work [laughs]. When you do something you like, you never stop. When I work. I'm extremely happy.